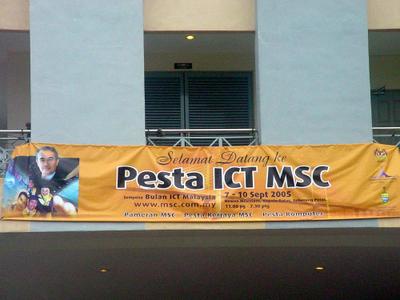 I came to the event with much anticipation that I am going to close a one million dollar deal for my company. Having in mind the kind of person I am targetting (CEO or M.D) that I was set-off with a good intention and left-off with a different experience.

I haven’t been able to close any million dollar deal, yet I did make myself known to many people. And some of them would be visiting this blog one day.

So, no deal for me, the ICT event was organized in conjunction with the 9th IAP(Internationaly Advisory Panel) meeting for MSC. The official meeting was held on 8th September 2005 at the Vistana Hotel however the opening ceremony was held on 7th September 2005 at Dewan Millenium, Kepala Batas, Penang. The only reason that this whole thing were being held at the north side of Malaysia is that Penang is hometown to our honourable Prime Minister, Data Seri Abdullah Ahmad Badawi.

The organizer; MDC is pretty smart at the marketing. If you are going to hold any event at the prime minister’s hometown, you get a treat of cheaper marketing cost. Nevertheless, the real reason is actually due to the fact that the theme for the ICT event is “E-Community”. It encompasses the following applications: 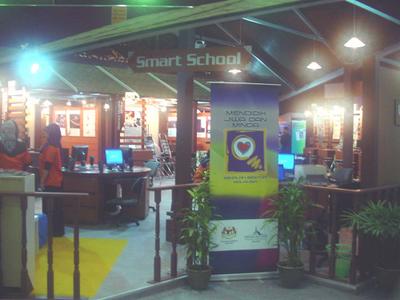 The timing and location is perfect. Kepala Batas is currently still rural area in Penang. People would be excited with E-Community applications as compared to city folks. And I strongly believed that the organizer did put in a lot of planning and smart thinking to have created such wonderful event where basically by introducing the people to e-community based applications, the following hopeful can be achieved later.

1.Increase awareness about I.T in the rural area.
2.Encourage people to buy PC and having a broadband connection.

Streamyx the monopoly:
Therefore, streamyx is either lucky or smart to be present at the event. The fact that there is no other broadband provider available for Penang folks; comparing to that, Klang Valley has a few braodband providers such as C.N.X, Time broadband, Soma and even Jaring.

Thus, let me endorse this that there is no fault in MDC’s planning, everything is about cost-saving these days. We have move into a survival age, only the fittest survive. Try to think what would happen if we introduce them the broadband and PC first before the application? The outcome is that not only the response would be bad, yet also there would not be any passive consequences because rural people don’t see the need to be paying RM88 per month for Internet connection and some even think that it is silly to have computer at home.

Good Response:
JPJ is having an application where visitors can check for traffic summons status and it attracts a lot of attention and awareness. Of course, there is nothing fantastic about the application, just reading some data from some HD. But perhaps the beauracratic challenges overcome is something worth recognized, salute. Malaysian are finally given more transparency and conveniences. 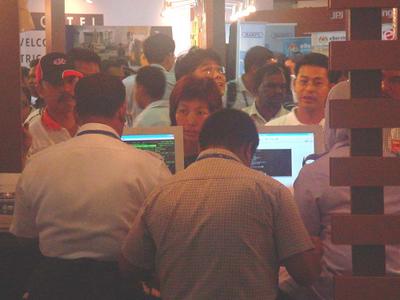 Problems with blogging:
I should focus on the problems of blogging, that it is not high-tech enough. I actually have no opportunity to blog for the last four days.. The hotel which I stayed has no broadband connection, the shops surrounding it offer no coffee-bean and I just have to defer the blogging job.

I think we seriously needed something more sophisticated, something which I can blog on the fly; as I walk and talking to people, I should be able to capture observations and create conclusions. We needed a presentation engine badly, having content management engine is not good enough already.

Problems are not restricted to my hands being tied down, yet also applies to the infrastructure around me. It finally make sense to having 3G services which allow me to login to the Internet anywhere in the country, without having to wait and pray for hotels to adopt free broadband connection for customers.

Jobs to be grabbed:
For those of you interested with finding new jobs, the following companys actually advertised for jobs opening. (Please send your application now)

Conclusion:
The biggest gainer of this event is the community of kepala batas and places around it. We have people from all walks of public sector attending it, ranging from nurses, teachers, students and even the army have expressed interest with computer programming. This is fantastic. On the 8th September, the whole of Penang educational sector attended the event and on th 9th of september 2005, we have visitors coming from Kedah and Perak. Like I mentioned early, the organizer really had big discount towards their marketing expenditure because the only advertising component is the honarable prime minister of malaysia, Dato Seri Abdullah Ahmad Badawi; Pak Lah. And they are not paying a cent to him, imagine having invited Ms. Amber chia or Mawi of Akademy Fantasia to be the star attraction which wouldn't be free altogether.

The rural folks, especially young unmarried ladies are delighted to have people like me visiting their places for the first time. It must have been a long haul of boring drive for them, living in those peaceful and unhappening society for their whole life, however the fact to the matter is that I admire the kind of life they endowed. I really do, KL city life is really sucks.

Children from all over the places, were so delighted with the event. It gave them a peek into the real world, what is beautiful and ugly, a relief to their monotony thirst. If you look at their faces, they hope that we will never leave this place that this event will be carried on forever, because they wanted to come here everyday. But sadly, we all have to go back to meet realities, the only thing that matter is that you have been there for once. This moment is theirs. 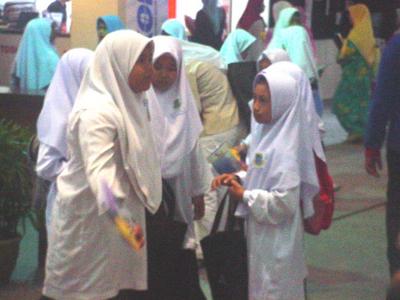 Anonymous said…
Hey, I like your blog. Im going to put it with the rest of my favorite blog

Anonymous said…
This is a excellent blog. Keep it going. Don't miss visiting this site about how to buy & sell everything, like music on interest free credit; pay whenever you want.
Sep 11, 2005, 12:34:00 PM

Anonymous said…
This is a excellent blog. Keep it going. I'm sure you'd be interested in How to buy & sell everything, like music on interest free credit; pay whenever you want.
Sep 11, 2005, 2:04:00 PM

Brandon Teoh said…
princess:
I learnt that we could really be the bridge to the digital divide, that digital divide has real business revenue potential.
Sep 11, 2005, 2:05:00 PM

Anonymous said…
Nice to know what outsiders thought of the local people. We' local people proud... been given a change to house such happening event this time around. Well, you are wellcome again in the future.
Sep 13, 2005, 8:32:00 AM