I finally understood why is chinese language web sites load slower than the default English one, this is because more HTML tags are required to be associated with its encoding. 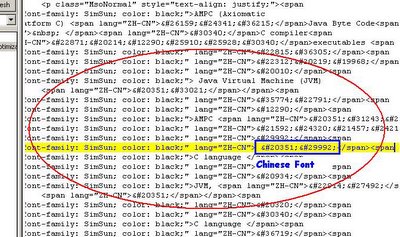 Look at how messy the code is, I wouldn't want to look at it.

Try to launch the this link, a chinese blog provider.

Hidden Element:
One of the reason is due to the fact that web authoring tool like Microsoft Front Page or Macromedia Dreamweaver are great DOM(Document Object Model) analyzer. Means that it is able to unearthed to you the hidden element of DOM's object such as a string. 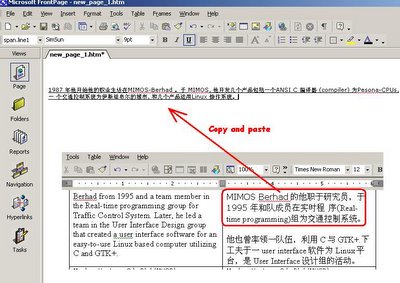 ~Take note that after copying from MS Word to MS Frontpage, the text or string object became underlined~

Sometimes, a DOM manipulator like Microsoft Word relies on the concept of "state" for its working. Means that if you had a string called "GONG XI FA CHAI", first you had it underlined, thus a state of "underlined" would be applied. Then you had it "bold", another layer of state added to it. Then you undo-underlined, by right the same for "underlined" should be removed. But what if you underlined it 10 times and then undo it once, I am not sure, it might be corrupted. However, you won't see the defects in Microsoft Word, but if you copy it and paste it on Frontpage, you might be surprised to see that it is underlined. This is probably due to DOM comformance standard.

The Need for Optimizer:
This also helps me to understand the basis of optimizer, which is to get rid of the redundance and repetiting elements of a particular AUTOMATION-GENERATED entity; in this case would be the HTLM file. Noticed that I highlight about AUTOMATION-GENERATED... It is not automatically generated, there wouldn't be redundance but errors, because there is no way human would be able to code redudance thingy, because we are so limited. Well if you want to argue, less-experience programmers might be coding redundance-design-codes which is not directly coherent with what we are talking here, that is due to knowledge and experience lacking.

Over here, redundancy occurred due to the following reasons:

Instead of improving the features and logics of the web authoring tool, another way to get rid of this is to create optimizer. WHY ? because the programmer who created the web authoring tool has to time to think about that (he is busy debugging and making new features), the job has to be relied to others.

The idea of optimizer works when a scenario can be analyzed in a different angle.I like to believe but don't know how that out of the 100 possibilities, an optimizer probably just need to consider 10 possibilities. Probably because optimizer will stick to industry standard while automation would like to cater the greatest possibilities ever.

Certainly like to explore more about optimizer for the lower level such as optimizing compilers. Maybe next time.

However, now I realized that the reason for optimizer is due to the presence of man-made automation.

Conclusion:
Another reason for slowness is due to the fact that a chinese font web site would on the average having more contents than English one because the font is smaller.

However, perhaps XML-based processing can solve the problem. Yeah, it could, but you need to build web site in a work-around method. Otherwise one would have suffer when using Google Mobile Personalized Home Page for reading non-english site.

The period during which a developing fetus is carried within the uterus. In humans, pregnancy
averages 266 days (38 weeks) from conception to childbirth. Traditionally, pregnancy duration
is counted from the woman's last menstrual period, which adds roughly 2 weeks to gestational
age. This is how physicians arrive at a pregnancy length of 40 weeks (280 days).
Nov 25, 2006, 4:50:00 AM

the most popular of a class of games called vying games, in which players with
fully or partially concealed cards make wagers into a central pot, which is awarded
to the player or players with the best combination of cards or to the player who makes
an uncalled bet. Poker can also refer to video poker, a single-player game seen in
casinos much like a slot machine, or to other games that use poker hand rankings.
Nov 25, 2006, 4:50:00 AM

In modern times, people have sought ways to cultivate, buy, wear, or just be around
flowers and blooming plants, partly because of their agreeable smell. Around the world,
people use flowers for a wide range of events and functions that, cumulatively, encompass
one's lifetime
Nov 25, 2006, 4:51:00 AM