on January 26, 2006
In my friend's blog about the rising Chindia (China and India) and the inevitable treat facing USA, "what American must do to compete with it.."

it states simply that USA has to do the following:
1. Continuous innovation.
2. Learn Chinese and Tamil.
3. Widen up entry to Asian students for varsity admission.

In my opinion, the fact that USA will lead in continous development will not be a problem for the next few decades.. The reasons are:

These big brands are operating at a level where they are always ahead of people even for the rising Chindian. Not many Asian originated company is capable of operating at the future level for the reason that business-suistainability has always been the main priority to the majority of enterprises.

For instance, many search engine companies started off in Malaysia before Google, to name a few they are:

But these search engines (which I have used before), are hardly heard of these days because probably they didn't figure out the future plan and when Google hit the road with search-algorithm... all was lying flat on the ground.

There is no way these companies are going to gear up for continuous innovations because they have a bigger issue to handle; existence as a search engine. The search-algorithm factor had put them out of the equations for long.

Using Google as example, which is already talking about ...

which are all fun and extra to their establishment. Of course those people in the Google Plex are having fun everyday.

2. Mentality of Chindian.
Many have argued and some thought that Chindian don't have the right attitude to lead the world. Some chinese believes the the teaching of confucianism is not good at all, they preferred the american way. That such teaching don't encourage innovative thinking...

To me, the bigger issue is about jeolousy of the same race. Chinese and Indian are not by a fair distribution, as patriotic as the Japanese and Korean. They stabbed each other from social-political to corporate arenas. And let me tell you it is not easy to become successful under this type of environment.

The fact that China will innovate is not impossible, in fact, they are already sending human up to the space and having olympic champion in events used to be championed by the american. However, is there a need to do that when the two governments of world most populated nation need to emphasize on solving unemployment and poverty problems rather than anything else. Perhaps, slowly...

At the same time, world women squash player no.1 is Nicol David of Malaysia, a chindian.

While Malaysia has always been busy with politics. 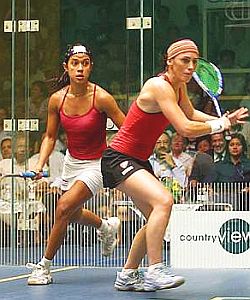 the most popular of a class of games called vying games, in which players with
fully or partially concealed cards make wagers into a central pot, which is awarded
to the player or players with the best combination of cards or to the player who makes
an uncalled bet. Poker can also refer to video poker, a single-player game seen in
casinos much like a slot machine, or to other games that use poker hand rankings.
Nov 15, 2006, 10:14:00 AM

In modern times, people have sought ways to cultivate, buy, wear, or just be around
flowers and blooming plants, partly because of their agreeable smell. Around the world,
people use flowers for a wide range of events and functions that, cumulatively, encompass
one's lifetime
Nov 15, 2006, 10:15:00 AM

The period during which a developing fetus is carried within the uterus. In humans, pregnancy
averages 266 days (38 weeks) from conception to childbirth. Traditionally, pregnancy duration
is counted from the woman's last menstrual period, which adds roughly 2 weeks to gestational
age. This is how physicians arrive at a pregnancy length of 40 weeks (280 days).
Nov 15, 2006, 10:16:00 AM