long-tail or glitches or interim?

The long-tail economy as started previously was such that.

So, now I suspect Google is implementing long-tail algorithm.

why I think so ? because of two observations I had taken note after 15th October 2006.

15th October 2006 was a special day because that was the day when this blog was finally earning a valid money from Google Adsense. The counter reaches beyong USD 100 a few days before 15th October 2006 and according to Adsense, publishers are given options to hold back cashing-out before the 15th October 2006.

This blog didn't bother much because receiving the first check from Google is such great anticipation which couldn't be resisted for long. It was a celebration, even though it may be nothing. It took almost 3 years for this blog to generate USD 100 as publisher to Google Adsense.

In retrospect, the next thing (1st Observation) which happened was that the PageRank for this blog was reduced from 4/10 to 1/10.

Check it out via PR Checker. 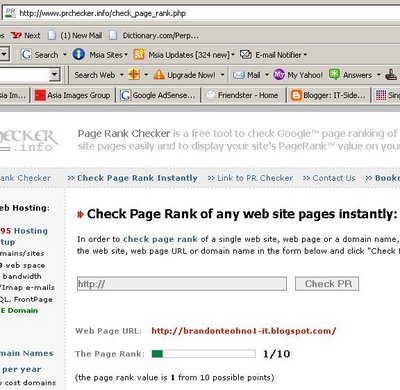 why is this happening ?

It is because Google is implementing long-tail algorithm ? "The Long Tail" states that everybody will be given at least one chance... everybody will be listed to Google's indexes and thus searchable. Thus, they want to reserve the ranking to other uprising blogs ?

Or could it be glitches ?

Checking with checkpagerank.com returned a different result, that is 4/10. 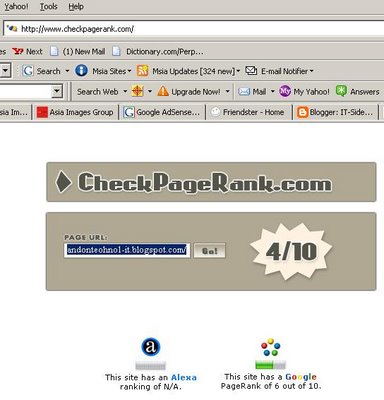 Then again, it could be interim...

Liewcf is backed on the top spot again, after suffering from some glitches recently.

It is at the second spot for the term "tech blog malaysia"; after IT-Sideways. 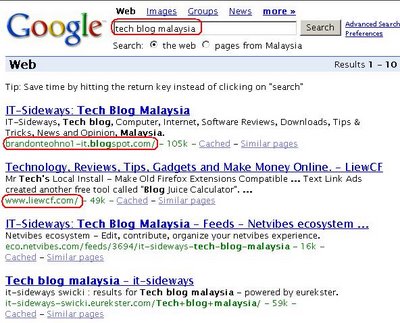 Have to wait and see.

As for the second observation after 15th October 2006... try to guess ? Google was trying very much to manage its money. It was during 13th -14th October 2006 where the eCPM for this blog's Adsense account to jump to USD 89.99

This is totally insane, it used be around USD 3 - USD 4 and now, out of suddenly, for no particular reason at all, it became 20 times more. and of course, during 16th October 2006, the eCPM was set to zero. arghhrrrrr!!!!! what a joke man.

I am still researching as in what factors determine the figure of the eCPM. I even take note of all the advertisement which was appeared on the blog during 13th to 14th October 2006, and they are:

And the biggest question now is that how can publishers justify all these ? Do we have a say or rights to know. Or just merely wait and see.

And I am not even sure if it is justifiable for the eCPM to hold a value = 0.00, which is totally not making sense because every click does count, even if it is just one click.