How to buy from iTunes music store in Malaysia ?

on November 13, 2006
Why is Malaysian keep buying pirated music ?

I actually wanted to buy a song or album from a legitimate online music store from Malaysia ...

So I tried Yahoo music, which is not available for people other than people from the USA and Canada market.

Then, I went on to try Apple's iTunes music store, which surprisingly to me that it is also not available for Malaysian. 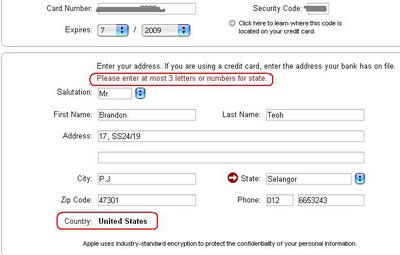 The only option is to put a 'dummy' address, which I feel a bit weird of doing that.

Okay, I understood that they do it for a reason, in fact, it isn't available for all Asian country except for Japan. Malaysia is known for software piracy and there is a high possibilities that a single purchase would spawn into a million of free downloads. But practically, anybody can still purchase a CD and convert it to MP3 and then let it be downloaded for free. So, the policy is meant to be politically correct.

But it is frustrating to me because when I thought of obtaining a legitimate music from the Internet, I wasn't given much choices. And at the same time, pirated music sellers in Malaysia are exposed to the risk of being caught and getting jailed, for the reason that the authority is obligated to protect some business interests in Malaysia such as Song Music, BMG and etc. Check out this link. Comparing to the fact that there is no interest for authority to protect when it comes to software other than Microsoft and some bigger names.... because there is no local distributor around. So, nobody bothers to complain anyway. And yet, still I am literally forced to look for the 'alternative' per se.

Anyway, thanks to blogger liewcf with this entry, I found that there is a site called soundbuzz.com. There is in fact a Malaysian music store known as Music BlueHyppo, however there isn't much choices from the search. I couldn't find "Ryan Cabrera" and "Simple Plan". So, I gave up on it.

Something to think about, how on earth do the users of iPod buy music from the Internet ? I am just wondering. I have always thought that iPod and iTunes go together.. now I know that there are iPod users who purchase pirated music from the streets of Malaysia and I couldn't quite blame them.

And the Malaysian government is thinking of improving the bumiputera ownership of the MSC cluster... while at the same time, the culture of high-tech is not fully matured.
Apple e-Commerce Music Software

Anonymous said…
The main reason why iTunes or any other digital music store is not selling music in Malaysia or other countries is because each countries has it's on variety of copyright laws, entertainment tax law, import laws or tax, internet laws and such. Each country has their own version of their RIAA. With this Apple or Yahoo might need to set different pricing on items sold.

Some countries imposed ban on certain artist or tv shows or movies (iTunes store sells movies too), and Apple has to keep up with that.

Apple and Yahoo are just not bothered to follow through this things, this is why it's hard for them to have a truly global music downloading service.

It is really a complicated matter. It is different in europe because they have the "European Union" (EU) and shares the same currency, 'euro'. While in Asia each countries are to their own.

Our buying power here also isn't that strong, not many people here shops online as maybe compared to Japan.

Anonymous said…
so did the blogger actually purchased anything from iTunes after using a fake address ? did that worked ?

Brandon Teoh said…
I think u can now buy it from the official online Apple store for Malaysia.

Unknown said…
I bought 2 songs, from Trackitdown.net and Beatport.com. Quite reasonable price. Kinda bummed about Itunes not available in Malaysia though. I really want to buy Katy Perry - The One That Got Away. Cool song.
Dec 16, 2011, 2:23:00 AM