In conjunction with the excitement culminating with the opening of WCIT 2008, MIMOS and Microsoft Malaysia have announced their collaboration to create an "Innovation Ecosystem" to elevate the ICT sector up the value chain in Malaysia with the establishment of the "Microsoft Innovation Centre" at MIMOS.

Under the terms of the memorandum, MIMOS will be providing the physical infrastructure and human capital to develop technologies based on applied research undertaken at MIMOS. Meanwhile, Microsoft Malaysia will provide the software, tools and access to know-how, locally and abroad, to further accelerate and catalyse innovation done at the centre by MIMOS R&D personnel. 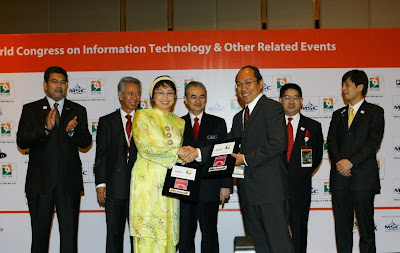 "We believe innovation is the key to leadership in the ICT industry but we also know that innovation doesn't stand on its own. In order for innovation to happen, many contributing factors need to be in place. These can come in the form of infrastructure, human resource, tools and access to information, to name a few. Without these factors, the industry will not be empowered and enabled to innovate," Yasmin Mahmood, Managing Director of Microsoft Malaysia, explained.

She added, "The MIC is another investment by Microsoft in Malaysia. I am confident the infrastructure we have in place for the MIC, in partnership with MIMOS, will create an environment that encourages innovation and grow the 'innovation ecosystem'. This is in-line with Microsoft's aspirations to play an active role in creating an ICT ecosystem that will enhance and spur further growth in Malaysia's knowledge-based economy and society."

“The collaboration with Microsoft is a huge boost to MIMOS’ research infrastructure. Collaboration is the key to bringing ideas to life and, with the combined capabilities and resources, the MIC will be the key driver in making ideas happen. MIMOS is confident that the MIC will be the gateway to accelerating an innovation ecosystem, in line with our mission to grow indigenous yet globally competitive industries,” said Dato' Abdul Wahab Abdullah, President and CEO, MIMOS.

Expected outcomes of the MIC include technologies in the form of Intellectual Property (IP), software and tools that will be fed into the academic community, local R&D as well as software development companies. It is hoped that such a move will help boost the local software ecosystem to a higher level, contributing to Malaysia’s aspiration in moving up the value chain in the software industry.

Microsoft has been in Malaysia for the past 15 years, a country which Yasmin described as being “extremely strategic.” During the period, it is estimated that Microsoft Malaysia has invested more than RM200 million to nurture and further grow Malaysia’s local software economy with continued annual investments of some RM26 million.

Yasmin also said Microsoft's role was to provide the best products, tools and technology platforms that would pave the way for local partners to build, innovate and specialise in software solutions and applications. Microsoft Malaysia's partner ecosystem currently comprise about 5,000 solution providers, 800 of which are independent software vendors (ISVs).

“About a third of Mesdaq-listed companies are Microsoft partners. From our estimates, they have created some 50,000 jobs in Malaysia,” she said, naming IFCA-MSC Bhd, Cuscapi Bhd, and Excel Force MSC Bhd as examples.

According to International Data Corp's (IDC) Economic Impact Study 2007 report, the Microsoft ecosystem (comprising companies selling products that run with or on Microsoft software, or that service and distribute Microsoft software) played a key role in driving the IT industry's overall contribution to job growth and economic development.

“Microsoft-related employment is expected to be 44% of total IT employment,” the report states, adding that the Microsoft ecosystem was expected to generate revenues of more than RM6.4bil this year. Over the next four years, Malaysia's IT industry would drive RM15.4bil in new tax revenues and contribute new revenues of RM17.6bil to gross domestic product.