WCIT 2008: Innovation In The Connected World

Here is the summary of the talk given by Dr Ya-Qin Zhang, Corporate Vice President,
Microsoft Corp.

The Bill Gates appearance via hologram was so cheap.. and the speech was pre-recorded and stereotyped. However, people still applauded. This shows that Bill Gates is more popular than any other ICT figures in Malaysia.

The Microsoft chairman mentioned that what Microsoft has achieved is only tip of the iceberg. The PC era has enabled what 1 billion of population of the world to be able to use computing resources and allowing enrichments through innovations.

What about the next 5 billions people ? (Gates hinted) 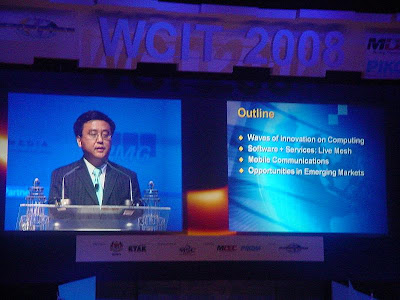 Dr Ya-Qin Zhang came on stage to present what Microsoft is trying to focus on to deal with the issue of getting the next 5 billion people to have computing privilege. The solution to that is nothing but three words; mobile, mobile, mobile.

So, iPhone may not going to be a hit, hit, hit... but it is definitely on the right track.

Dr Ya-Qin Zhang presents a few trends which all flowing down towards two major things (the near future):
Forget about what he mentioned about technology mega trends.

And about live vision...

The best part about the presentation is Fone+

Fone+ is a new software ecosystem Microsoft is building (with the team in China) which would allow a mobile device to act as a CPU (by connecting to a dock) and permitting user interaction with keyboard, mouse and TV (as the Interface).

So, the biggest point here to me is that if you are going to build a social (Facebook, Friendster and etc) and even business application, it is time to jump into the bandwagon of the cloud computing where the biggest challenge are remote storage,security and virtualization.

Virtualization means purely logical (non-physical dependence). For instance, if you are building an application which relies on calling the local C Drive (hard drive) c:\...

Then it is not virtual.

However, the obvious target of Fone+ is China and India. Dr Ya-Qin Zhang said also to Malaysia (ahem..)

Dr. Ya-Qin Zhang serves as corporate vice president, leading Microsoft's overall research and development efforts in China. Dr. Zhang joined Microsoft in January 1999 and is one of the founding members of the Microsoft Research Asia lab. As managing director, he built the lab into a regional Asian research powerhouse with over 200 researchers.

Dr. Zhang has a PhD in electrical engineering from George Washington University and master’s and bachelor’s degrees in electrical engineering from the University of Science and Technology of China. He has more than 50 U.S. patents granted, and has authored more than a dozen books and 300 influential technical papers and journal articles. Dr. Zhang serves on the board of directors for many technology companies and has contributed to multiple international technology standards. In 1997, he became the youngest-ever Fellow for the Institute of Electrical and Electronics Engineers (IEEE) and has served as editor in chief for influential IEEE journals and publications. He has won many professional awards, including the 1998 Outstanding Young Electrical Engineer from the National Electrical Engineer Honor Society of Eta Kappa Nu, the 1997 Research Engineer of the Year from the Central Jersey Engineering Council and, recently, the Industrial Pioneer Award from the IEEE.

Check out other summaries happening on day 1: