WCIT 2008: Tracking the Internet into the 21st Century

This is the summary of the speech given by Dr Vinton Cerf, Chief Internet Evangelist,Google Inc. The plenery hall L1 was fully anticipated and it was such a great finale for WCIT 2008. It even caught delegates standing by the side of the hall. 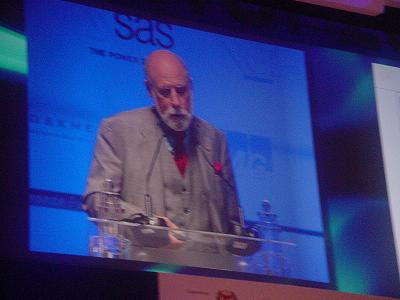 The first part of the speech was about statistic presentation...
To cut things straight, the first part was about Dr Vinton Cerf trying to tell you what you could guess, only you don't have the facts to confirm it. That is why he presented the facts.

You can say that in the near future until year 2035, the following things will happen..


Things will get faster and faster, there will be more population in the world and hence you need things like IPv6 and good search engines and etc ... People will earn less money and business model will have to adapt to changes. Since the Internet will become faster and people to earn less, more time will be spent on the Internet. As a result, the future of Internet is anything and everything that it should be because you will have more for less and less for more and life goes on.

The second part was about some of the things Google is really trying to focus on heavily..
The final part was about Google's initiative to develop a communication protocol that would be deployed to the space program. Communication protocol is referring to protocols like TCP/IP and things alike. Existing protocols are not competent for space program purposes and NASA does develop custom protocols.

The problem is that there is no standardization effort and Google attempts to solve that. If successful, this will be the stepping stone for integrating the Internet (in the world) towards the outer space (solar system).

Vinton G. Cerf is vice president and chief Internet evangelist for Google. In this role, he is responsible for identifying new enabling technologies to support the development of advanced Internet-based products and services from Google. He is also an active public face for Google in the Internet world.

Dr Cerf is the former senior vice president of Technology Strategy for MCI. In this role, he helped to guide corporate strategy development from a technical perspective. Previously, he served as MCI's senior vice president of Architecture and Technology, leading a team of architects and engineers to design advanced networking frameworks, including Internet-based solutions for delivering a combination of data, information, voice and video services for business and consumer use.

Widely known as one of the "Fathers of the Internet," Cerf is the co-designer of the TCP/IP protocols and the architecture of the Internet. In December 1997, President Clinton presented the U.S. National Medal of Technology to Cerf and his colleague, Robert E. Kahn, for founding and developing the Internet. Kahn and Cerf were named the recipients of the ACM Alan M. Turing award, sometimes called the "Nobel Prize of Computer Science," in 2004 for their work on the Internet protocols. In November 2005, President George Bush awarded Cerf and Kahn the Presidential Medal of Freedom for their work. The medal is the highest civilian award given by the United States to its citizens. Prior to rejoining MCI in 1994, Cerf was vice president of the Corporation for National Research Initiatives (CNRI). As vice president of MCI Digital Information Services from 1982-1986, he led the engineering of MCI Mail, the first commercial email service to be connected to the Internet. During his tenure from 1976-1982 with the U.S. Department of Defense Advanced Research Projects Agency (DARPA), Cerf played a key role leading the development of Internet and Internet-related packet data and security technologies.

Vinton Cerf serves as chairman of the board of the Internet Corporation for Assigned Names and Numbers (ICANN). He served as founding president of the Internet Society from 1992-1995 and in 1999 served a term as chairman of the Board. In addition, Cerf is honorary chairman of the IPv6 Forum, dedicated to raising awareness and speeding introduction of the new Internet protocol. Cerf served as a member of the U.S. Presidential Information Technology Advisory Committee (PITAC) from 1997 to 2001 and serves on several national, state and industry committees focused on cyber security. Cerf sits on the Board of Directors for the Endowment for Excellence in Education, Avanex Corporation and the ClearSight Systems Corporation. Cerf is a Fellow of the IEEE, ACM, and American Association for the Advancement of Science, the American Academy of Arts and Sciences, the International Engineering Consortium, the Computer History Museum and the National Academy of Engineering.

Cerf is a recipient of numerous awards and commendations in connection with his work on the Internet. These include the Marconi Fellowship, Charles Stark Draper award of the National Academy of Engineering, the Prince of Asturias award for science and technology, the National Medal of Science from Tunisia, the Alexander Graham Bell Award presented by the Alexander Graham Bell Association for the Deaf, the NEC Computer and Communications Prize, the Silver Medal of the International Telecommunications Union, the IEEE Alexander Graham Bell Medal, the IEEE Koji Kobayashi Award, the ACM Software and Systems Award, the ACM SIGCOMM Award, the Computer and Communications Industries Association Industry Legend Award, installation in the Inventors Hall of Fame, the Yuri Rubinsky Web Award, the Kilby Award , the Yankee Group/Interop/Network World Lifetime Achievement Award, the George R. Stibitz Award, the Werner Wolter Award, the Andrew Saks Engineering Award, the IEEE Third Millennium Medal, the Computerworld/Smithsonian

Other Talks Held on Day 3: