Partners announce progress on sequence and analysis of Jatropha Genome.

Knowledge of the plant and environment genomes will foster the development of improved plant feedstocks, biofertilizers, plant disease diagnostic and control solutions and renewable fuels.

Kuala Lumpur, Malaysia and La Jolla, California, U.S. May 21, 2008 - Asiatic Centre for Genome Technology Sdn. Bhd. (ACGT), which is focus on the commercial application of genome technology to improve oil palm and other crops and Synthetic Genomics Inc. (SGI), a privately held company dedicated to commercializing genomic-driven solutions to address global energy and environmental challenges, today announced the completion of a first draft assembly and annotation of the oil palm genome. The organizations also announced that they have made progress in sequencing and analyzing the jatropha genome. The oil palm and jatropha genome projects represent the first stages of research undertaken through a joint venture between SGI and ACGT which was announced in 2007 and is aimed at developing more high-yielding and disease-resistant plant feedstocks. ACGT is a wholly owned subsidiary of Asiatic Development Berhad, and oil palm company listed on Bursa Malaysia (Malaysia Stock Exchange) and a member of the Genting Group. 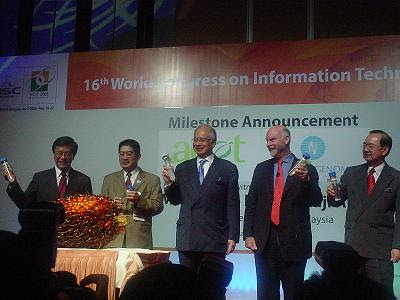 The oil palm genome is approximately 1.8 billion base pairs in size, about four times the size of the rice genome and two thirds the size of the maize genome. The groups sequenced a combination of two oil palm races-tenera and dura, to produce seven-fold coverage of the plant's genome, which represent the most comprehensive sequence and analysis of this genome. SGI and ACGT will continue to do additional sequencing and analysis of the oil palm genome and when completed, this will become the reference genome.

The companies are also conducting an in-depth genomic, physiological and biochemical analysis of jatropha, a robust oil seed crop whose oil is suitable for conversion into cleaner, renewable fuels. Jatropha readily grows on marginal lands not used for food production. Since Jatropha is a non-domesticated crop with few published studies, it has significant potential for improvements in yield and agronomic properties. The Jatropha genome is a 500 million base pairs in size, similar to the size of the rice genome. The organizations will continue to sequence and analyze the Jatropha genome to achieve ten-fold coverage.

"The genome sequences of these highly productive oilseed crops will enable the in-depth understanding of genes encoding for plant yield and health and foster the development of improved plant varieties. We are also characterizing the important microbes living in the environments around these plants," said J. Craig Venter, Ph.D., founder and CEO of Synthetic Genomics. "Our goal is to harness this knowledge to produce improved feedstocks, renewal fuels, biofertilizers, and disease-control solutions.

The draft oil palm genome is already yielding important information including unique genetic variations linked to traits that differ in the two races. One example of this pertains to kernel shell thickness which differs between the two. Since fruits with thinner kernel shells yield more oil, the groups are seeking to understand the genetic basis for shell thickness. These molecular markers and others can be used in breeding and tissue-culture based approaches to address plant yield, oil quality, growth and height and other important properties, including fertilizer requirements and stress and disease tolerance.

"The completion of the first draft sequence of the oil palm genome and progress on the Jatropha genome are significant milestones towards the genetic improvement of these inherently high yielding oil crops. Unlocking the knowledge encoded in the genomes could further increase our understanding of these important crops which would lead to substantially improved oil yield. With such enhanced productivity, growing oil palm and Jatropha could be the sustainable solution to fulfilling the world's need for a wide variety of products." said Tan Sri Lim Kok Thay, Chief Executive of Asiatic Development Berhad.

SGI and ACGT are also using environmental genomic techniques to sequence and analyze the root, soil and leaf microbial communities surrounding the oil palm and Jatropha plants. Understanding the oil palm and Jatropha genomes and their environments will enable the groups to develop diagnostic tests for plant diseases as well as agents for their control, leading to healthier and more productive crops. These genomic-based interventions will contribute to more efficient land usage with higher agricultural yield and more sustainable development with improved stewardship of the plantation environment.

Asiatic Development Berhad ("Asiatic"), a 55%-owned subsidiary of Genting Berhad, commenced its operations in 1980 as the plantation arm of the Genting Group. Over the years, the Asiatic Group had embarked on several significant acquisitions in Malaysia, thus increasing its land bank from a mere 13,700 hectares in 1980 to nearly 66,000 hectares currently. in line with its long term strategy, the Asiatic Group had, in June 2005, further expanded its operations to Indonesia, on a joint venture basis, to develop some 98,300 hectares. The Asiatic Group also owns 5 oil mills with a total milling capacity of 235 tonnes per hour and is reputed to be one of th lowest cost palm oil producers with fresh fruits bunches production of over one million tonnes. Asiatic is one of the early members of the Roundtable on Sustainable Palm Oil (RSPO).

Anonymous said…
Following the palm oil genome project, what are the possible impacts on other important crops such as sago palm, aside from oil palm.
Jun 25, 2008, 3:38:00 PM

Anonymous said…
We [url=http://www.casinosaction.com]casino online[/url] have a rotund library of unqualifiedly unsolicited casino games championing you to play right here in your browser. Whether you want to procedure a table game strategy or even-handed try manifest a few late slots before playing in the direction of genuine in dough, we have you covered. These are the rigid still and all games that you can engage at veritable online casinos and you can part of them all representing free.
Jan 29, 2013, 3:11:00 PM