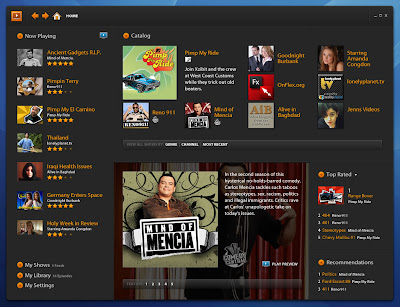 Recently Launched Player Now Features 15,000 Pieces of Content, Including New Shows on CBS and a Selection of MTV Networks' Most Popular Shows

MTV Networks (MTVN) is one of the leading television broadcasters that have added new content to the catalog in Adobe Media Player. In addition to clips from MTV’s The Hills and MTV Cribs, viewers can now use Adobe Media Player to discover, organize, and subscribe to an added selection of MTVN’s popular shows, including clips from COMEDY CENTRAL’s The Daily Show with Jon Stewart and The Colbert Report.

Adobe Media Player is a customizable, cross-platform, Adobe AIR™ application that lets viewers discover and interact with their favorite content, while offering revenue and brand-building opportunities for content publishers. Adobe Media Player is available for immediate download at www.adobe.com/go/mp.

“Adobe Media Player has emerged as a fantastic platform for audiences to access and interact with our content, and we’re excited to expand our content offering on the media player with more and more of our hit programming,” said Greg Clayman, executive vice president of digital distribution and business development at MTV Networks.

For the first time, consumers can download video outside the browser in the FLV format, which can be viewed in 1080p, 720p or 480i video display resolutions with advanced audio quality.

Users can also subscribe to television shows and other online video content and then automatically receive new episodes of the shows as they become available.

To help viewers discover new content, a broad, searchable catalog of shows from leading media companies and networks is available and continually expanding with new content.

“The old saying, ‘If you build it, they will come’ holds true for Adobe Media Player,” said Jim Guerard, vice president of Dynamic Media at Adobe. “With Adobe Media Player, we are helping to redefine next-generation TV experiences. With over 400 shows including new popular programs such as The Daily Show with Jon Stewart and The Colbert Report, it’s clear that we're spurring a seismic shift in how content is distributed and consumed.”

About Adobe Systems IncorporatedAdobe revolutionizes how the world engages with ideas and information – anytime, anywhere and through any medium. For more information, visit
www.adobe.com.

Anonymous said…
Having fun reading of your blog.