on July 25, 2008
Juniper Networks, Inc. (NASDAQ: JNPR), the leader in high-performance networking, today named Microsoft veteran Kevin Johnson as Chief Executive Officer, succeeding Scott Kriens who will remain Chairman of the Board. Kevin, formerly President of Microsoft’s Platforms and Services Division, is a proven leader with an incredible career path of growth and success at Microsoft and before that with IBM. Johnson was with Microsoft since 1992. 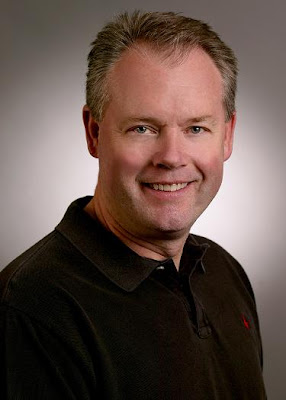 Scott Kriens to Remain Active as Chairman of the Board

KUALA LUMPUR, MALAYSIA, July 24, 2008 – Juniper Networks, Inc. (NASDAQ: JNPR), the leader in high-performance networking, today named Microsoft veteran Kevin Johnson as chief executive officer. Upon his arrival in September, Mr. Johnson will also be appointed to the board of directors. The company also announced today that Scott Kriens will continue as chairman of the board and will remain active in the areas of strategy and leadership development.

Mr. Johnson joins Juniper Networks from Microsoft Corporation where he served in a range of strategic executive assignments over the course of his 16-year tenure, most recently as president of the Platforms and Services Division.

“The first 12 years at Juniper have been the most rewarding years of my professional life and I am incredibly proud of what we have accomplished together,” said Scott Kriens, chairman and chief executive officer of Juniper Networks. “We are very excited to welcome Kevin as our new CEO he is a world-class executive, and a person whose values align exactly with the culture upon which Juniper has been built. I look forward to working closely with Kevin in the years to come as we continue to build on Juniper’s success.”

“The Juniper team has been at the heart of the success we have realized since the founding of the company in 1996, and Scott has been at the center of that team with me since those early days,” said Pradeep Sindhu, founder and chief technology officer of Juniper Networks. “Today that team has gotten even stronger, with the addition of Kevin’s experience at scale, his background in engineering, and his proven ability to lead companies through times of rapid growth. I am looking forward to working closely with Kevin, Scott and the rest of the leadership team as we realize our vision of connecting everything and empowering everyone.”

“I am delighted to join Juniper,” said Kevin Johnson. “Juniper is a company with a clear technology agenda, great talent and an amazing growth opportunity in a growing industry. I’m looking forward to bringing my experiences to help Juniper scale and deliver great value to Juniper’s customers, partners, employees and shareholders.”

Most recently, Mr. Johnson, 47, led the Platforms & Services Division, an organization of over 14,000 employees with responsibility for product development, marketing and strategy for the Windows and Online Services businesses. Under his leadership, the division achieved record breaking results with over $20 billion in revenue in fiscal year 2008. In addition to leading the Windows business, Mr. Johnson focused on building Microsoft’s position as a leader in online advertising and evolving its “software + services” strategy.

He also worked globally with consumer, small and medium-sized business, enterprise and service provider customers. Prior to his current role, Mr. Johnson served as group vice president of Microsoft's worldwide sales, marketing and services and oversaw corporate operations and IT functions that supported the work of Microsoft employees around the world. Previous to Microsoft, Mr. Johnson worked in IBM's systems integration and consulting business and started his career as a software developer. He earned a bachelor's degree in business administration from New Mexico State University and served as a founding member of the board of directors of NPower, a nonprofit organization whose mission is to help other nonprofits use technology to expand the reach and impact of their work. Mr. Johnson also served as a member of the Western Region Board of Advisors of Catalyst, a non-profit organization dedicated to women's career advancement.

Anonymous said…
In today's time, lots of people enjoy online games. Anyone of any age can enjoy them at home or even in an arcade. To get the most out of your online gaming experience, read the recommendations in this article.

Buying the best playstation for your gaming preferences can be touch. Think about what you like in a gaming system and find the xbox that best suits your needs. Research the gaming systems on the Internet. Check out reviews from other gamers, too. Before purchasing a console, educate yourself.

Auctions on the Internet are a great place to buy games from. You can save a lot on online games by purchasing them on auction sites. Conduct some searches to fund the best possible deals. After that, just keep on bidding.

If you have a kid and they get too aggressive when they play too many video games, you may need to put them into some sort of a time out. Give him a 10-minute warming, and then call an end to the game. Suggested activities include exercise or playing outside. This will focus his mind on something less stressful.

When the gaming industry moves ahead, so do the gamers. Gamers expect low prices, instant access, and a large selection. When a new game releases, try waiting a few months. The prices of online games periodically get slashed as games loose their newness factor.

In order to understand and guide your child's use of computer games, you must be involved. Spend some time playing the game and watching your child play. Ask them questions to show that you are interested. The best experience to have is a hands-on one!

Keep an eye on kids playing games online. There are games that tell you that with online play it might change the rating. Also watch the chat to see what your child is saying or saying to others. You should ensure your kids are not seeing anything inappropriate when they are playing in this situation.

Start out with the easiest mode. If you discover a game is too easy, restart the game with a harder difficultly level. Once you have played on a beginner level for awhile, you will find it much easier to eventually play on a harder level.

Of course, you will have your favorites if you are a serious computer game hobbyist. It's important that these are not the only types of games you play all the time, though. Try out different styles of games every now and again. Finding new genres of games can be an exciting experience.

If possible, try games out before you buy them at your local library. Most public libraries offer online games that can be checked out for free. The library usually has game titles for all different systems, so simply call ahead and see if they have the title you want.

Figure out how to operate the safety and parental controls of any gaming system that comes into your home. You can likely make adjustments that keep kids from viewing mature content. Some allow each gaming profile to be customized separately, allowing adults to enjoy games not meant for younger audiences.

Enjoy your gaming more after having read this article. Computer Games help us escape our boring everyday lives, which we all need from time to time. Game on!
Jan 28, 2013, 11:47:00 AM