on August 15, 2008
In terms video broadcasting, the Beijing 2008 offers two types of videos. Video is all about the format; Flash Video and WMV (Windows Media Video).

Flash Video is offered via YouTube with a direct link from the English home page.

Video is also a sensitive issue with regards to copyrights and the YouTube offerings are supposedly sponsored or endorsed by Olympic Broadcasting Services (OBS). Ironically, by judging from the numbers of clips available, it looks more like marketing attempt for OBS. 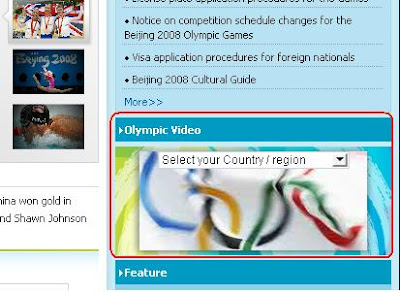 One have to specify the country of origin before allowing to watch the videos, and certain countries would hit the restriction page.

At the video homepage, there is this thing called subscription but actually it doesn't mean anything. My guess is that previously they are trying to enforce subscription on YouTube. 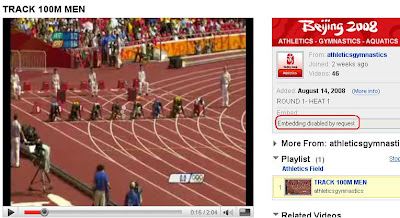 All videos are not allowed to be shared to other blogs or web sites. And the titles are very generic to minimise the possibility of being search from generic YouTube page. 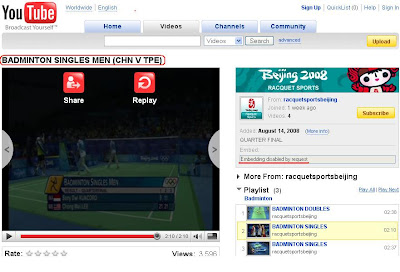 Remember, Olympic videos are not supposed to be free. Go watch Astro.

All these go on to suggest that there are conflicting issues building up to the joint-venture between Olympic and Youtube where the latter has a policy of no-charge viewing.

So, videos hosted on YouTube are 'unofficial' videos ? This would make YouTube looks bad, maybe it was YouTube's initiative to host the videos and no formal agreement can be agreed to.

The official videos comes in the form of Windows Media Video format and it can be viewed with Media Player or Real Player. If you are having Firefox, you have to download the Media Player Plugin for the browser.

Just have to embed the following scripts into your HTML. 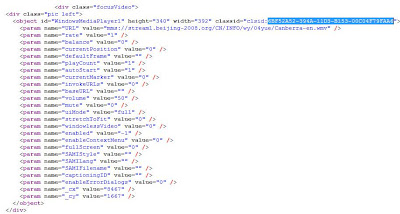 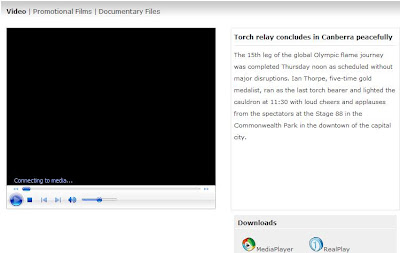 But the streaming using Windows Media Player is slower than Flash Video via YouTube. If you are from Malaysia, waiting for it to load will be wasting your time. 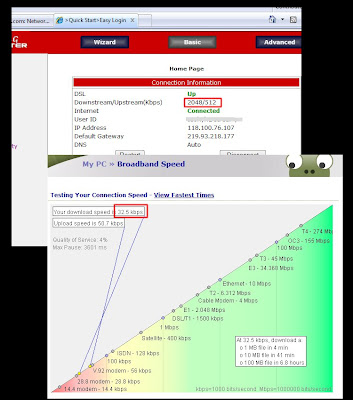 Pay attention to HSBB(High Speed Broadband) and the QucomHaps projects.

Another example is NBC Olympic where videos can only be streamed if you are living in the USA. 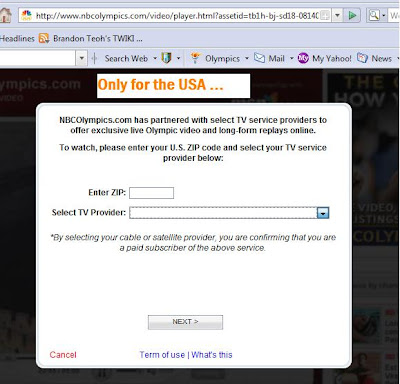 But you can actually crack it by providing a valid zip code and just select the top few TV providers. Then it will work :)

Nevertheless, all these are just clips, why so big deal ?

The biggest point here is that videos are not supposed to be published without consent.
Events Web Based