on October 29, 2008
In conjunction with Google's first ever Google DevFest held in Singapore today, Google is organizing an OpenSocial Gadget Contest for local developers to use their coding skills and creativity to build OpenSocial applications. The main objective is to support the developer community and encourage innovation on the OpenSocial platform. 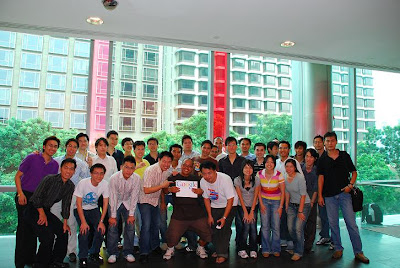 Google will award 4 prizes in Singapore and 4 prizes in Malaysia to local developers whose applications are picked by a panel of judges from Google, eXo Platform, Friendster, Globant and hi5. The top winner in each country will receive a Nintendo Wii and the rest of the winners will get an Apple iPod Touch. More importantly to the developers, the winning OpenSocial applications will be promoted to drive widespread user adoption on OpenSocial partner websites to potentially reach hundreds of millions of Internet users worldwide.

Developers can register and submit their OpenSocial applications at http://code.google.com/events/apacdevfest/contest from November 15, 2008 to January 10, 2009.

Google DevFest saw over 400 Singaporean and Malaysian developers in attendance being hosted by Google, eXo Platform, Friendster, Globant and hi5.

Press release about Google DevFest and futher information on the OpenSocial Gadget Contest is attached here. Please feel free to call me or Rene Leow (017-883 0848) for further inquiries.

Unknown said…
Informative commentary . my working group some time ago saw http://pdf.ac/9WXHxG to print pdf , It's quite uncomplicated to use and it's powerful ! I was told that they offer a free trial ongoing
Oct 4, 2015, 11:26:00 AM