2009 Trends in Networking and Security

on January 08, 2009
As I am desperately seeking 1st quarter strategies for companies, David Gibson of Inter-Asia is kind enough to supply me with this comments Wan Ahmad Kamal, Country Manager, Juniper Networks Malaysia about trend in Networking and Security for 2009. 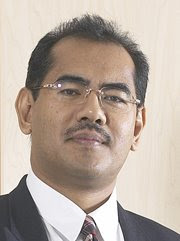 There are 7 key areas identified by Juniper Networks Malaysia.

This is a good insights into what Malaysia is expecting to see in 2009.
Business Companies Networking Strategy