The trends coming to market are cloud computing and mobile internet which are expected to contribute a lot of unpredictable stresses towards existing network infrastructure.

Network architecture are usually by convention, consists of either 3 tiers or 2 tiers. These 3 tiers are 1.) Core layer, 2.) Aggregation layer, 3.) Access layer.

Such conventional design is not very efficient because it introduces a lot of latency.

With these two trends of cloud computing and mobile internet, such architecture will not be able to cope with explosive exponential data in and out of data center.

Juniper Networks' solution to this is the single tier network architecture, which is called the QFabric.

QFabric allows the network to be virtualized and creates nodes which are logical. The outcome is seemingly a fabric where all nodes are interconnected without inter-intermediaries. The technology generates benefits in the forms of:
QFabric is a result of 3 years in development, 1 million man hours, $100 millions of millions of investment and over 125 patents filed. The QFabric technology presents 3 core features:
The end to end connection between nodes is virtualized or logical, the hardware and software suites that make this possible consist of:

QFabric will only be available to the market by Q3 of 2011 while some customers (such as New York Stock Exchange) are actually performing trial on it.

While waiting for that to happen, Juniper Networks today launched a product called the QFX3500; 10GB Ethernet switch which has QFabric capability. In other words, instead of buying other switches, customers can now start deploying networks using QFX3500 which will later cater for seamless integrations into the QFabric.

This technology will establish a great challenge to main competitor Cisco. According to Juniper Networks' managing director En. Wan Kamal, Cisco hasn't yet announced anything of such capability, which is to tackle the issues and challenges of 3 tiers network architecture. The reason as cited by En. Wan Kamal is that Juniper Networks is very much focused on doing what it does best; innovation in computer networking technologies. 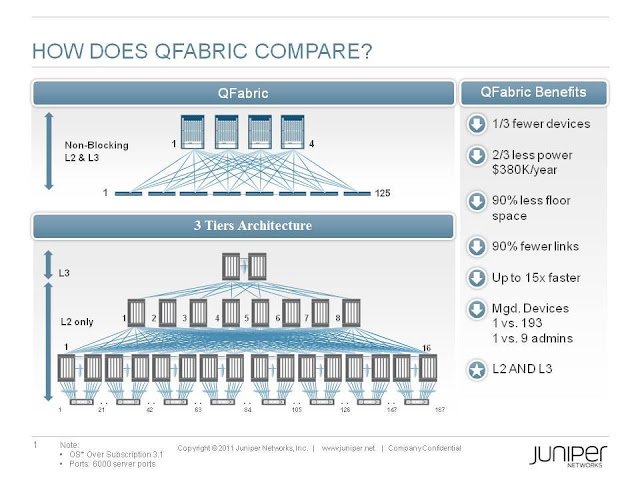 As a result, QFabric is the first true data center fabric technology, with quantum leap in speed, scale, and simplicity and is the foundation of data centers for the next decade!
Juniper Networking

Nandhini said…
Updating with the latest technology and implementing it is the only way to survive in our niche. Thanks for making me this article. You have done a great job by sharing this content in here. Keep writing article like this.
SAS Training in Chennai | SAS Course in Chennai