on May 19, 2011
We have known Brocade for being the core player in SAN switch, collaborating with other entities such as EMC for SAN storage devices.

For many years since it was first founded, Brocade core competencies were SAN networking technology and fibre channel technology, collectively considered to belong to data center technology.

In year 2008, Brocade acquired Foundry Networks to capitalize on its IP based network technology (Ethernet switches and routers).

With this acquisition, Brocade was able to move up the value chain by providing a complete set of networking technology from physical layer, networking layer up to application layer as determined by the OSI. It was a good move and Brocade's business progresses greatly thereafter.

Going back to its inception, Brocade has been market leader in terms of research and development of application-specific integrated circuit (ASIC) technology as well as their own firmware known as Fabric OS running on its ASIC based chipset. This gives them industrial edge over competitors.

The current version of Fabric OS is Fabric OS 6.x which supports Virtual Fabrics-capable while for its ASIC chipset, it is GoldenEye 2.

According to Gina Tan (Director, Regional Sales South East Asia), Brocade was the first company in the industry to introduce cloud computing readiness for networking technology, namely its VCS technology.

Cloud computing is the biggest trend in the ICT industry as at for now.

Their biggest selling point and competency is Brocade Complete SP Solution;cloud ready from service provider CORE-TO-EDGE, which is targeting service providers such as telecommunication providers.

The idea is this. 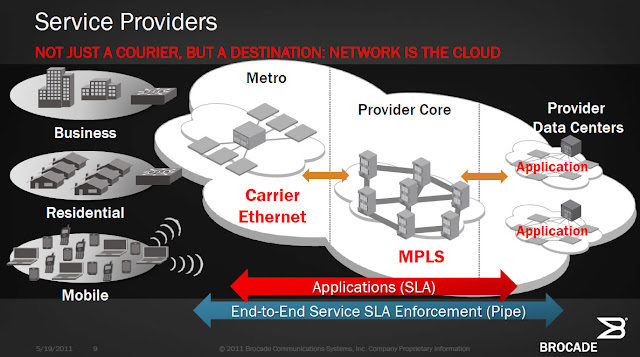 And if you are not a service provider, all you really need is to start with VDX 6720 Ethernet fabric switches to help you with step by step, seamless, hassle free, plug and play deployment for cloud optimized network adoption.

Brocade's strategy to help companies to adopt cloud optimized network lies in its Brocade One's CloudPlex Architecture; an open standard architecture for cloud optimized computer network architecture. The CloudPlex supports open standards such as OpenFlow and OpenStack. What this means is that if you are a CIO or network architect for data centers, be it private cloud, public cloud or hybrid cloud, you need to make a decision on the next step (direction), and hence you should consult CloudPlex.

In other words, Brocade is the leader and the guru for cloud optimized network and they know what is best. You should consult them for 'free'.

rico said…
Appealing information you have provided. It gained me more knowledge and idea. Please keep up the good because i like the way you are writing. Thanks!

Jhonathan said…
Cloud is one of the tremendous technology that any company in this world would rely on(cloud computing training institutes in chennai). Using this technology many tough tasks can be accomplished easily in no time. Your content are also explaining the same(Cloud computing training). Thanks for sharing this in here. You are running a great blog, keep up this good work(hadoop training in chennai).
Aug 25, 2015, 2:37:00 PM

Manpower Consultancy in Chennai said…
Very nice article.We have to learning for lot of new information.Thanks a lot.

kanchana said…
Nice..You have clearly explained about it ...Its very useful for me to know about new things..Keep on blogging..
Hadoop training in chennai

Unknown said…
Wonderful article.It is to define the concepts very well.Clearly explain the information.It has more valuable information for encourage me to achieve my career goal.

Unknown said…
This technical post helps me to improve my skills set, thanks for this wonder article I expect your upcoming blog, so keep sharing...
Regards,
PHP Training|PHP Training in Chennai
Jul 26, 2016, 7:55:00 PM

Arthur Mac said…
Pretty post. Whatever we accumulated data from the web journals, we ought to actualize that in basically then no one but we can comprehend that precise thing obviously.
Java Training in chennai | Java course in chennai | JAVA J2EE Training Institutes in Chennai
Aug 14, 2016, 5:53:00 PM

Deepika said…
Very informative blog. Thanks for sharing such good information and keep on updating.