on July 30, 2011
With the population increasing, the traffic woes is ever increasing as well.

Let's take a look at the most vehicle congested highway in Klang Valley; the LDP (Leburaya Damansara Puchong). This particular highway, connects people from Bangi up to Sungai Buloh, can you imagine that ? 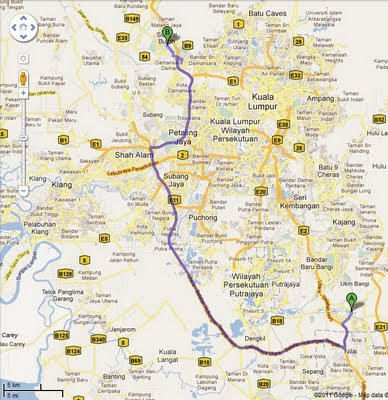 Just imagine the intensity of it by catering for vehicle movement daily, supplying traffics for these major townships, each has its own fair play of commercial and light industry concentration.

Local councils should sponsor money to setup Telepresence facilities for rental to the public.

In fact, we could have one Telepresence facility for each of these townships along the LDP, a total of 16 facilities. We need to identify a suitable location with abundance of car parking spaces. And if we can do that, just imagine what will happen that we can ideally reduce traffic volume along LDP by 16 times. That is like trying squeeze in 16 people into one vehicle.

It is worth a thought as this is some kind of project that will benefit the society and Malaysia.

It is also possible to merge this idea with the much anticipated proposed MRT project whereby Telepresence facility can be setup at the MRT station itself. We just need better transportation in and out of the stations.