As many of you may know, Friendster announced that it is re-launching itself as a social gaming portal and launched a beta version of the new Friendster a couple of weeks ago.

Friendster has touched the lives of many. Since MOL, the company I founded acquired Friendster in early last year; many people have come up to me to tell me how Friendster has changed their lives. Many have told me that they have found their life partners over Friendster. Just last week, a successful Internet entrepreneur in Singapore told me that her success was triggered by promoting her business on Friendster.

Friendster pioneered social networking and ignited the social media industry that has created billion dollar companies such as Facebook and Twitter, companies that may not have existed in their present form if not for Friendster's early innovation.

Today, Friendster is in a unique position to take advantage on the growth of social gaming. Through its relationship with MOL, which has a 10 year history in working with gaming companies, Friendster has both the experience and track record to make innovations in this space.

Today, as Friendster reinvents itself as a social gaming destination that enables its users to create multiple avatars, play games and enjoy rewards; I hope that all of you will wish us luck and continue to support us in our new reincarnation. The new Friendster is not perfect and we will continue to add new games and features such as localization and rewards over the next few months.

Our team is working hard on adding these features and welcomes your suggestions and comments on how we can better serve your needs as a social gaming and entertainment destination.

I would like to take this opportunity to thank all of you for your support and hope that all of you will enjoy the new Friendster as Friendster continues to innovate to serve and entertain you better. 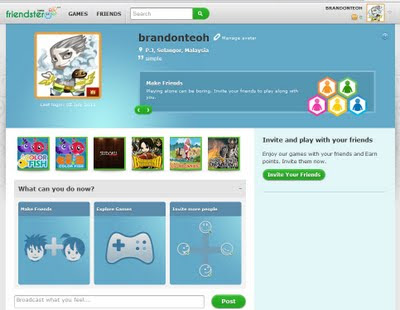 Everything is related to gaming and avatar.

By the way, your friend listing gone. Don't bother to look for it.

This is what I think.

Friendster may find niche for people who are anti web social, who dislike having public profiles and sharing of personal life with others and who are into gaming. This niche of people are particularly common amongst technical and nerdy people; sort of introverted innovators, thinkers,visionaries,phantom web surfers and that sort.

The true fact is that a common Joe will not have enough time to 'socialize' in so many different platforms of social media, usually will stick to one which sometimes may also lead to too much unnecessary modern stress. It is just like having multiple email accounts, you will bleed electricity if you have too many email accounts and the stress is real if you haven't checked your emails for days. Trust me, it is.

And why I think Friendster still have big chances ?

philcrock said…
if any site on the internet should be blacklisted it's friendster for deleting millions of people's personal photos and messages
Jul 3, 2011, 7:28:00 AM