The mobile phone can eat our lunch!

on April 14, 2012
After the success of iPod by year 2005, Steve Jobs declared during one board meeting that "the device that can eat our lunch is the cell phone."

Jobs was thinking about the future of iPod and for the company and it was decided that Apple will have to make a mobile phone which can also play music similar to what iPod does.

Thus, the ROKR (ancestor of iPhone) was born. It was more of like a prototype; a creation Motorola and Apple and the wireless carrier Cingular. ROKR was actually made out of Motorola RAZR. 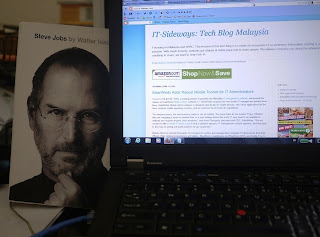 The ROKR wasn't considered to be anything successful, at least to Apple's standard and Jobs' taste. It was ugly and not user-friendly and Jobs labelled Motorola as stupid company.

So, Jobs decided to do the mobile phone all by themselves.

Given the success of iPod which Apple has a reason to protect the business, and with more than 825 million mobile phones were sold in 2005, it was a huge market and business potential for Apple to carry on this strategy.

The knee-jerk reaction to accomplish Jobs' vision was to modify the iPod. The trackwheel was considered as the main instrument to scroll phone menus and without keyboard, entering number wasn't a natural fit and makes it a lousy option.

However, the idea of using iPod trackwheel wasn't scrapped immediately, it went on into further development.

What most of us do not know is that by year 2005, Apple was already having a secret project to build a tablet computer. In other words, the idea of iPad actually came before iPhone.

One of the biggest challenges of creating iPhone was the multi-touch which took them 6 months just to come up with a workable prototype. 6 months!

At the same time, Apple had acquired FingerWorks , all of its patents, and the services of its two founders; John Elias and Wayne Westerman of University of Delaware.

So, by then Apple went on two development paths for iPhone. 1.) to base on iPod trackwheel and 2.) to base on multi-touch.

This direction took them another 6 months until a decision was made to scrap the iPod trackwheel idea and just to focus on multi-touch.

The other big challenge was the decision on keyboard. Without a keyboard, it makes it hard to implement the features of phone locking. Nevertheless, it was decided that iPhone will be a software phone with no keyboard and that the solution for the phone locking is to 'swipe to open'. This is a remarkable invention of Apple.

The third major challenge was the glass for the touch screen which also took 6 months to produce.

The company known as Corning Glass had earlier developed a product called "gorilla glass" which was incredibly strong but had no market potential during that time. Jobs liked the idea immediately and signed up with them.

After 9 months of R & D and redesigning on the iPhone which was nearing completion, Steve Jobs suddenly ordered major revision. The problem was the initial design had the glass screen set into an aluminum case and during one Monday morning, Jobs realized that he just didn't like it. His reason was that the iPhone should focus on the display and not to have the case being too revealing. Thus, it was redesigned again and ended up with just a thin stainless steel bezel that allowed the gorilla glass display to look like it is without a frame.

This decision resulted in the circuit boards, antenna, and almost everything to be redone. Jobs offered the team to kill him right away for his craziness or to embrace the challenge and they backed him up instead;the team had to work nights and weekends.

iPhone was unveiled Jan 2007 at Macworld and went on sales 5 months later. By the end of 2010, Apple sold ninety million iPhones.

Even big companies struggle with strategies and invested resources into bad options. There was no God in iPhone's creation, it was great vision, risk taking, tenacity and a lot of passion for success. Nobody (including Jobs) knew what would come out of it.

With all their intelligence, know-how and hard works, it still took Apple 6 months to create a working prototype of multi-touch screen.

The biggest revelation that I had with iPhone was that it feels like iPhone was created by Apple within a few days. This tells me that we have most often taken things for granted more often than we know. And for those people who never ever going to have the opportunity read this blog or the biography, that the iPhone was created out of day dreaming or fell from the sky.

Officially, the iPhone was developed in around 9 months of aggressive R & D and with many overlaps of schedules by many different teams simultaneously. I would think that from idea inception to the first sales, it took them around 2 years of effort. 2 years!

It involves tremendous amount of resources, hard work and determination coupled with world class talents. So don't come and tell me you want to create a world class product all by yourself within 2 years.

Finally, I feel that there are many people with determination and passion similar to Steve Jobs even in Malaysia, the only problem is that the employees do not feel like they are part of anything great as in what Apple was experiencing. Therefore, in many situations outside Apple, employees would have chose to go for the kill than to embrace the challenge.
Apple Entrepreneur Ideas

Unknown said…
Thanks for sharing information..