on July 10, 2012
The premium segment of the automotive industry is set to ignite yet again with BMW Group Malaysia’s introduction of the all-new and updated version of Malaysia’s most successful Sports Activity Coupé – the BMW X6.

First introduced to the world in 2008, the BMW X6 blends the best of two worlds by exemplifying superior driving dynamics and performance in the sleek design lines of a BMW Coupé. With over 155,000 units delivered worldwide the BMW X6 created a segment in its own right and has spurred competitors in the automotive industry to attempt to follow its remarkable success. 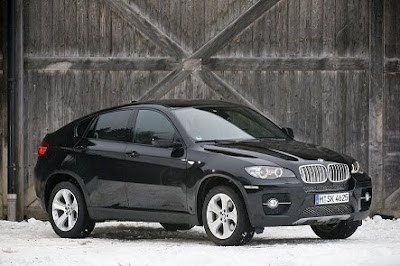 Presenting the new BMW X6 to the market in the form of the BMW X6 xDrive35i, Dr. Gerhard Pils, President of BMW Group Malaysia said “With a total of 263 BMW X6’s already delivered in Malaysia since its introduction in August 2008, the new BMW X6 xDrive35i continues to build on the success of one of the most historic achievements in recent automotive history.”

Dr. Pils further added that he was confident that the all-new innovative interpretation of the BMW X6’s feature and design qualities will continue to strike a chord with BMW customers and that the car would continue to be a firm contributor to the company’s business success.

Continuing a legacy of individual and exciting looks, the new BMW X6 further accentuates its Coupé heritage with the new contemporary BMW kidney grills together with a three-dimensional chrome frame and angled lower slats. The integration of BMW’s New Adaptive Full-LED Twin Headlights with three-dimensional light rings together with a distinctive cut-off top and bottom edges and superimposed LED-powered accent lights to the sides further enhances the aesthetic menace and powerful aggression of which the BMW X6 embodies. Meanwhile, fog lights with surrounds done in matt finish are also included as a standard feature and are spaced apart on the front apron along the upper section of the cars outer air inlets to further accentuate the new BMW X6’s broad structure. From the rear, the new L-shaped taillights with two LED-powered light clusters provide a characteristically BMW night appearance. This new feature marks the first use of LED technology in the segment and futher enhances the BMW X6’s predatory appeal.

Moving into the interior, the new BMW X6 continues to deliver a unique combination of exclusive luxury, sporting dynamics and powerful design down to the very last detail. The car’s sophisticated five-seat interior further delivers high-quality surfaces which exudes premium quality and comfort with all-new Nevada leather upholstery featured as standard as well as an optional Vermillion Red finish for customers who would like to continue to evoke a sense of raw power and sophistication for both the driver and passengers alike. The progressive contemporary character of the BMW X6 is further enhanced by a host of products from the comprehensive BMW ConnectedDrive range of driver assistance systems and mobility services including the BMW Head-Up Display, rear-view camera with Top View, Navigation System Professional as well as extended Bluetooth functions featuring Bluetooth office, Bluetooth Audio Streaming and on-board internet.

“The BMW X6 demonstrates the BMW Group’s ability to deliver fresh and emotional designs and evokes a passion for performance, style and comfort in a suburban vehicle unlike any other. It is the latest in the BMW range of segment setting vehicles which we are proud to introduce to the Malaysian market.” said Dr. Pils.