The amount of mobile malware is rapidly increasingly, in particular among Android, the leading smartphone operating system. In May, Naked Security conducted a survey of 900 readers, which found that 39 percent used a smartphone running Android. According to Juniper Networks and F-Secure respectively, the growth rate in Android malware last year increased 155 percent over 2010, and the number of Android malware families nearly quadrupled from 2011 to 2012.

Later this year, Sophos plans to offer a managed Enterprise version of Sophos Mobile Security with enhanced functionality. Targeting corporate users, it will help to provide better protection for corporate devices and data.

To download Sophos Mobile Security for your Android, use the QR code below: 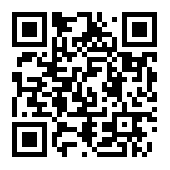 In another report, IT security and data protection firm Sophos is warning Twitter users to be cautious following the discovery of a widely spread malware attack on the micro blogging site. Malicious links, claiming to be an online photo of the Twitter user, are at present being spammed out across the social network. The links point to Russian web pages that ultimately attempt to infect Windows PCs using the Blackhole exploit kit.

At present the dangerous tweets say "It's you on photo?" or "It's about you?" followed by a link.

The cybercriminals behind the campaign could change the wording used in the dangerous tweets at any time.

"If you see tweets like this, please do not click on them," said Graham Cluley, senior technology consultant at Sophos. "There isn't a photo of you waiting at the end of the link - and the accounts that are spreading the messages have either been compromised by hackers or have been created by hackers with the purpose of spreading the dangerous links."

"There's a real danger that if Twitter users have not properly protected their PCs, and unless they are warned of the risk, that many people will click on the links without suspecting that they are putting their computer and personal data at risk," warned Cluley.
Mobile Security Sophos

Anonymous said…
Hiya! I simply want to give a huge thumbs up for the great info you will have right here on this post.
I shall be coming again to your blog for more soon.

Anonymous said…
Good day! I just would like to give a huge thumbs up for the
good data you’ve gotten here on this post. I will likely be coming back to your blog for more soon.

Anonymous said…
Hi there! I simply would like to give a huge thumbs up for the nice info
you’ve gotten here on this post. I can be coming again to your blog for more soon.