on August 01, 2012
Groupon Malaysia presented a cheque worth RM 110,040.00 to World Vision Malaysia following the contributions of thousands of Malaysians through the recently concluded ‘Donate RM10 for Nutritious Food for a Child and Family in Asia’ Groupon, an online deal in support of World Vision’s 30-Hour Famine 2012 project.

“We are overwhelmed with the amazing response from Groupon subscribers who, through campaigns like this, have demonstrated a genuine concern for those in need, wherever they may be in the world. To that end, the Groupon Promise will continue to go beyond simply offering the best deals possible, but to also provide Malaysians with the opportunity to contribute to a worthy cause and share the joy of bringing amazing life experiences to others,” said Joel Neoh, the Vice President and General Manager of Groupon South East Asia and India.

Through this partnership with World Vision Malaysia, Groupon Malaysia has taken social e-commerce to a new level by not only providing its customers with the best life experiences possible, but also by creating a platform through which they can contribute to a worthy cause and change the lives of children and families in Asia with the click of a button. Aimed at raising awareness and support around the issue of malnutrition throughout Asia, the full proceeds from the Groupon- World Vision collaboration will be used to sustain health, nutrition and development projects in China, India, Mongolia, Myanmar, Vietnam and Malaysia as well as to communities which are impacted by natural disasters.

“With so many children throughout Asia still suffering from malnutrition the need for support is as important today as it has ever been. We are proud to have had the opportunity to work with Groupon which has allowed us to generate further awareness as well as meaningful contributions to support the needs of children throughout Asia,” said Liew Tong Ngan, Chief Executive Officer of World Vision Malaysia.

He further added since the introduction of 30-Hour Famine in Malaysia in 1997, support amongst Malaysians to those in need have been tremendous with World Vision Malaysia successfully raising millions of ringgit to fund development projects throughout the world. 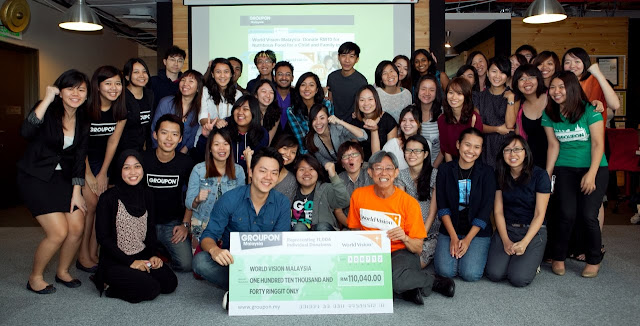 “Following the significant response which we’ve seen through Groupon customers alone, we are confident that 30-Hour Famine 2012 will see tremendous support from Malaysians who have, year after year, demonstrated tremendous generosity towards communities in need,” said Liew.

Since its launch in January 2011, Groupon Malaysia has attracted over 1.5 million subscribers and rapidly grown to become the national market leader. The company has successfully become a shaper of social e-commerce and empowers individuals to become a significant force collectively which apart from shaping it into one of the fastest growing businesses in Malaysia, it has also allowed the company to generate significant support for charitable initiatives with partners such as UNICEF and the United Nation’s World Food Programme.

“From the onset, the idea behind Groupon has been first and foremost to provide individuals with the opportunity to enjoy amazing life experiences, be it through the enjoyment of a product, service or the ability to enrich the life of another individual,” said Neoh.
Charity Groupon