Basically, SDN is a high level conceptual idea similar to big data, cloud computing and BYOD. It is very much a vision or a buzz world.

One good analogy is between conventional cell-phone and smartphone.

Basically a smartphone is a software phone which means that majority of its functions are not hardware defined. One good example is the keypad. If there is a physical keypad, then the IC(Integrated Circuit) of the phone must cater for it. Therefore, the IC of a smartphone is obviously something more generic or multi-purpose.

SDN can be achieved by having network virtualisation, programmatic control and cloud orchestration.

Brocade's solution for SDN is its VCS Fabric which powers its VDX switches which scale and this becomes what is called Ethernet fabric.

It comes from the concept of wafer fabrication in micro-electronics. Basically, if you take a wafer to perform fabrication on it, then it becomes IC (integrated circuit). And an IC is where nodes are connected to nodes.

In other words, it means nodes fully meshed.

Pay attention that it is all about switches - forget router, access point, last-mile and etc first.

The reason being is that in networking, switches do most of the mundane chores while others like routers would perform more intelligent chores such as deciding the best route - router configuration is most often more complex than anything else.

During Brocade's Analyst and Tech Day 2012, on his presentation on "BROCADE: INNOVATION FOR THE LIMITLESS GLOBAL NETWORK", what John McHuge (Brocade's CMO) was trying to tell us is to make use of VDX switches to build the core network, then use MLXe core router to connect the core network to other networks such as optical transport network (OTN) and this will achieve SDN.

Such phenomenon is evident from reality check as follows:

Finally, coming back to the fact that switches doing most of the mundane chores, using VDX switch which supports Ethernet fabric will result in dramatic increases in network utilisation and reliability (at the core network). 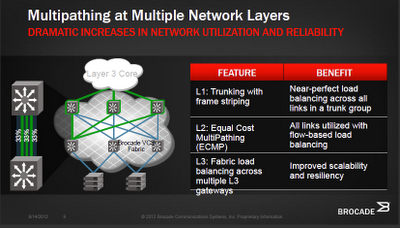 Benefits of using Ethernet fabric for the core network

1.) At L1: Trunking with frame striping to achieve near-perfect load balancing across all links in a trunk group,