on September 28, 2012
That is right dude, IT retailers have spoken their dilemmas and quite frankly, they are just sick of it.

I am not kidding, in fact Victor Chin (Managing Director of 1Utopia – Malaysia’s largest IT retailer group) said “not to make extra money, just to survive,” suggesting a fact that IT retailers are facing uphill tasks of maintaining their businesses these days due to mounting challenges.

I was invited to a forum jointly organized by 1Utopia entitled ‘Survival of IT Retailers”, which was attended by IT retailer representatives from different states in the country – basically the attendees represent a united voice so to speak.

The intention of the forum is to identify the business issues faced by these IT retailers and then to identify solution to move forward. 1Utopia felt that this it the 11th hour for the industry and situations are getting more desperate and very critical.

The official press release can be found here.

The Issues identified are:

IT retailers these days only get between 5% to 8% profit margin. By selling a laptop to a consumer valued at RM 1000, they only get to make RM 50. Running a business with such low profile margin resulted in inability to maintain high quality team, needless to say making any profit.

The forum blamed the business culture of IT vendors who consist of the biggest brands in the industry. IT vendors and their respective distributors just want to have big sales number and nobody really cares about tomorrow.

Victor Chin said that retailers are also not doing the right thing by killing each other and started the price war due to over-committing to stock commitment.

Some attendees voiced their dissatisfaction with the culture of the business. One particular IT retailer blamed that PIKOM had failed to help them. There was also suggestion that IT vendors exercised double standards and that these big brands need to be more reasonable and think about humanity.

“Nobody makes money anymore,” Victor Chin said which I disagree. Someone will always make some money, maybe just not you.

The statistics which was presented to attendees showed that PC sales are dropping tremendously and it looks like many IT retailers will end up winding up by going down this trend.

The forum concluded that an independent association should be formed, a separate entity from PIKOM, to safeguard the interest and future of IT retailers in Malaysia. 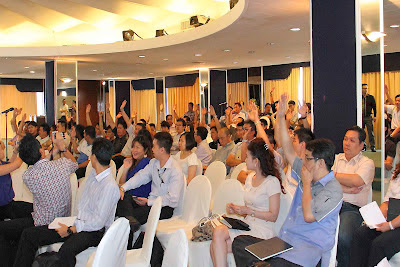 Interested IT retailers are encouraged to sign a petition to show their support in forming the independent association.

The original copy of the petition can be found here.

Basically, IT retailers couldn’t wait for PIKOM to help them anymore, they have to help themselves.

The proposed solutions are:

Do not take this lightly as this issue is multifaceted. The reason being is that the whole ecosystem is much more complex that what had been discussed in the forum.

The forum raised a very good point in which stock commitment is the root cause of price war and stock commitment is the culture of the industry. Nonetheless, if there is no requirement to buy stock, then online retailers will rule. Bloggers can setup an online store and will kill them flat because blogs will have more traffics than an IT retailer can cope with. No doubt it is true that consumers still like to touch and feel before buying but let me warn you that those online guys are mounting up their forces.

The issue with more supply over demand is hurting the whole IT industry, not just IT retailers. And personally I don’t see there is any solution to this. We can’t go back to industrial age from information age. Is there such thing as digital economy ?

Clash of the titans - the fights to be the one search engine, the one mobile platform, the one operating system, the one ERP system, the one database, the one server, the one social media is killing the whole industry. It is said that you need to start to worry when Google decided to do something for your industry. The industry is converging into an uncharted territory and technology is taking over many businesses.

All these contributed to the dilemmas.

They cried a river when comparing laptop sales to booming mobile phone sales and they had no opportunity to sell them. And also commented on the fact that people will buy one mobile phone per year on average while will only change laptop every 3 to 4 years.

I don’t really know why IT retailers cannot be allowed to sell mobile devices, probably due to some gaming rules to protect competition, but I do know and agree that nobody cares about buying Netbook anymore. Back in Jan 2010, Steve Jobs said that the Netbook is good for nothing when promoting iPad and he changed the world. That also prompted Intel to create the concept of Ultra-book. Steve Jobs was also the person who gave the ‘ICT retailers’ a new lease of life by inventing the iPhone which revolutionized the smart phone industry and also did the same hit for tablet. And it is said that Nokia was the one who first came out with the idea of smart phone – just too many sad news.

Not sure how Ultra-book is selling, I haven’t seen anyone around me buying it yet and the forum officially declared the obituary for Netbook.

It is hard to tell who belongs to the classification of IT retailers and most definitely it doesn’t involve those ‘machine’ stores. And I don't think this affects everybody in Lowyat plaza - not sure - maybe some just don't care. It surely speaks the heart of those 1Utopia's alliances and since 1Utopia is the largest IT retailer in Malaysia, hence it is fair to say that this voice represents the majority. Victor Chin promised to talk to IT vendors immediately to resolve issues as soon as the petitions are signed, will wait to see on the outcome.

The way I see it, these IT retailers are not excited about what is forthcoming in the industry, they just want their investment back.

As an independent media and entrepreneur, I rally behind you.