The BMW ConnectedDrive concept is referring to an idea of enabling the driver to be connected to the outside world while driving. Ideally, when such is achievable, the driver is in full control.

For instance, while driving from KL to Penang, the drive must be in touch with the status of the engine, fuel level, road condition, weather condition, changes to business appointments and etc.

To simply put, ConnectedDrive is the intelligent networking of driver, vehicle and the outside world. BMW figures that it can be expressed on four levels: 1.) the display and operating concept, 2.) an unparalleled light installation, 3.) the design of the car itself and 4.) the integration of the whole concept into a multimedia experience.

In order to achieve these ideals, BMW innovated concept cars. The latest concept car is currently on display at the Pavilion Kuala Lumpur.

It is a 2-seater roadster design to innovate and explore ConnectedDrive concept. For example, the car’s innovative new display and operating concept includes a three-dimensional Head-up Display in the windscreen, a freely programmable instrument cluster for the driver and an additional monitor for the front passenger for optimized practicality and safety. 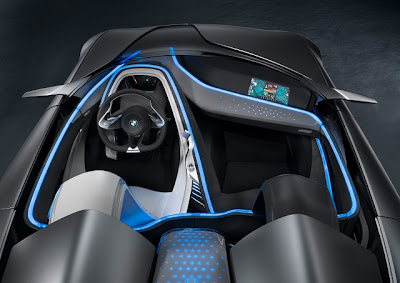 My personal belief is such that in order to control a vehicle well, one has got to drive it like your own body – you have got to feel the tyre, the rear and etc. BMW ConnectedDrive concept clearly defines such ideals.

Key features of ConnectedDrive's built-in navigation system which were reveal on July 2012 are: 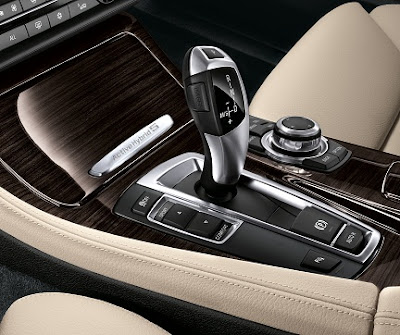 iDrive Touch -Touchpad (next to to the gear to the right)

Sustainability is a big deal for big enterprises and governments. You know why ? Because these big guys need to sustain their business more than anyone else..

Months ago, while I attended the Infocomm Technology Roadmap Symposium 2012, experts believe that businesses must not let capitalism grew out of control and jeopardises sustainability of human being. It is indeed very true.

"The world must start producing sufficiently for the many in order to embrace sustainability" says Dr. Peter Cochrane, Founder of Cochrane Associates.

During the BMW Innovations Showcase Dr. Pils further highlighted the need for Malaysia to make strong and proactive steps to move the nation’s automotive industry further up the green technology and sustainability chain, both in terms of encouraging the adoption of sustainable alternatives amongst consumers and as a matter of evolving automotive and industrial policies.

He added, “Malaysia must appreciate that the emerging strengths of the automotive industries in both Indonesia and Thailand are a threat to our regional and global competitiveness as an automotive player. We must be proactive in countering these emerging threats and a key means to achieve this would be to focus the nation’s efforts towards becoming a Regional Automotive Hub for the manufacture and assembly of Advanced Clean and Green Technology throughout the industry supply chain.

While the Malaysian government has begun to provide import and excise duty exemptions for Electric as well as Hybrid vehicles, the framework of existing policies remains restrictive as they are limited to vehicles with engine capacities below 2,000 cc in capacity. BMW Group Malaysia believes that for the full benefits of new and green technologies to be fully appreciated and adopted the exemptions must be extended to all vehicles that utilise such technologies regardless of engine size but with efficiency and emission reductions as its main criteria. This would encourage early adoption by all consumer segments as well as the entire automotive industry supply chain.

“The most remarkable fact about the BMW Vision ConnectedDrive is that a majority of its revolutionary features are already available in the BMW models of today courtesy of the BMW ConnectedDrive strategy. Of course, there are other leading features which will be introduced in the future as we at BMW constantly seek out innovations to make our cars even better than ever!” said Dr. Pils.

Also highlighted at the BMW Innovations showcase was the market introduction of the all new BMW Active Hybrid 3 and BMW Active Hybrid 5 cars to Malaysia. Fitted with the most advanced power train technology for hybrid vehicles, BMW’s Active Hybrid vehicles excel in all aspects of hybrid disciplines – output, fuel efficiency, range, all-electric top speed, acceleration and internal space and luggage capacity; all designed and engineered by BMW to deliver Sheer Driving Pleasure to its Malaysian customers without any compromise.

“The introduction of the all-new BMW ActiveHybrid 3 and BMW ActiveHybrid 5 completes the BMW 3 Series and BMW 5 Series product line-up in Malaysia. Given the Malaysian government’s growing support for Advanced Green technology which we expect will be further enhanced with the upcoming review of the National Automotive Policy, we aim to introduce even more of our Advanced Hybrid models as well as revolutionary Electro-Mobility solutions in the near future.” said Dr.Pils. 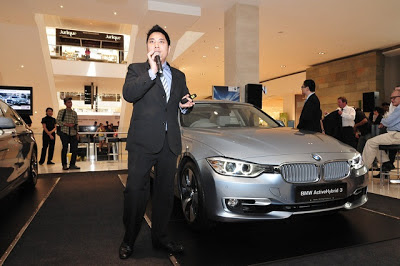 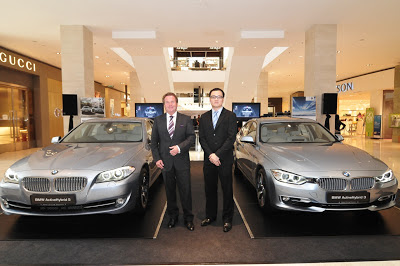 Members of the public who are keen to learn more about the BMW Innovation Showcase are welcome to visit the public showcase which will be held at Pavilion Kuala Lumpur from the 23rd to 28th of October.

Theodore Ware said…
Pretty impressive for BMW to finally make an electric vehicle conversion (albeit still going for a hybrid instead of a full electric conversion). That brake energy regeneration technology looks like a particularly interesting feature; talk about applied physics at work.
Feb 6, 2013, 5:58:00 AM

Alex Hughes said…
Been hoping that the automotive companies produce more of this kind. Not only it's trendy but it's also cheaper and more environmental friendly.
Apr 9, 2013, 8:13:00 AM

Taylah Wrench said…
Seems like another must see car coming from BMW. Hmmm, I wonder what will they offer to the public this time well apart from the sleek designs they've got and the speed they offer, probably it's more on practicality.
May 7, 2013, 4:56:00 AM

Jack Shaw said…
Looks like we’ve got a new dream car in here! The built in navigation systems were awesome. I just can’t wait to experience these tools especially the improved GPS and 3D City Models.
May 31, 2013, 4:21:00 AM