Fujitsu Provides Solutions for Everything ?

on October 11, 2012
You know what, I am really getting tired of hearing cloud computing, but today at Fujitsu Day 2012 press conference, it is happening again.

They are partnering with big boys like Microsoft, Symantec, Cisco to provide cloud computing solution that covers everything from infrastructure to application.... something like Symantec provides the security, Cisco provides the network, Microsoft provide … whatever makes you happy.

And writing article is getting harder because everybody is selling the same thing. C’mon guys, can you be more innovative ?

I feel as if I have written the best article in my life and I need to take a long break from mentioning cloud computing, big data, BYOD and oh man SECURITY…

When I was in Oracle Open World 2012, I had the chance of being up-close with Fujitsu’s Noriyuki Toyoki, Fujitsu Limited Corporate Senior Vice President.

It is also in partnership with Oracle to collaborate in many things such as developing a new generation of SPARK microprocessor by moving software function into silicon which is known as software on chip which is kind of like using the hardware to assist the software.

And let me explain Human-Centric Intelligent Society. To the extreme, it is a concept of a perfect world where there is a solution for everything and human co-exists with technology in the sense of achieving Utopia – one can fix liver damage through Fujitsu advanced healthcare capsule in the home. In practical sense, it is a concept similar to IBM smart planet which is about living life to the fullest and to co-exist with the nature supplemented by technologies. That sounds better right ?

So, forget about Oracle Open World 2012.

During the press conference, Craig Baty, CTO of Fujitsu Australia and NZ mentioned a few things that caught my attention.

Fujitsu is a big company with a lot of technologies to sell such as the K Computer supercomputer. The K computer is based on a distributed memory architecture, with over 80,000 computer nodes. It is intended to have a variety of applications, including climate research, disaster prevention and medical research. If you really want to buy…

First of all, Mr. Craig mentioned that Fujitsu wants to listen to what customers say and address to their needs on case by case basis.

Secondly, he mentioned that Internet of Things is going to be very big and exciting phenomenon where ultimately everything will be online which include the chicken that you are going to eat. Why would anyone want to do that ? Didn’t he know that vegetable is uncountable noun ? Do we really want to ID a Broccoli ? Why not if you want to make countable.

Thirdly, he mentioned about Shadow IT which is a phenomenon in which end users make use of computer system which are not approved by the organizations. This really excites me because for one I agree with him that it is going to rock and secondly this is something for startups to prosper. It is also part of consumerization of IT where consumers are blessed with plenty of options to choose the solution that they need and they can make their own purchases without having the organizations to approve it because they can afford it. For instance, a marketing manager wants to do some big data analysis and while waiting for CIO to select and approve a specific vendor to provide for enterprise-wide solution, he or she can make use of any potential free ones from the Internet or just to pay for a 1 user/month license.

Coming fourth is the evolution of CIOs’ job scope which is getting more challenging and wider. There is no right and wrong answer except that CIOs now will have to deal with more things and read more blogs to understand what is happening out there so that he or she can someone bring the craziness of ICT evolution to a certain degree of control within his or her organization. Most part of the challenges will be related to security and integration with cloud applications and social media. These are new challenges to the conventional CIO’s job scope which include IT-alignment and technology advantage for business growth.

Personally, I don’t think a CIO can handle so many things, they need the help of bloggers to inform them what is the right thing to do.

The fifth thing he mentioned was the Cloud store where Fujitsu invites developers to submit their cloud based application into their ecosystem. This concept is similar to Apple’s AppStore.

Moving to Malaysia’s perspective, Mr. Charles Lew, President of Fujitsu Malaysia shared that under his leadership, Fujitsu is preaching new technologies to Malaysia particularly to the public and financial sector. Potential projects include those in the educational sector and consolidation of data centres.

Another thing which I just taken note about Mr. Charles Lew is the fact that he is a computer science graduate who is also a certified public accountant and he had been a consulting partner with Deloitte & Touche. That is kind of unique.

Craig also reminded us that it was Fujitsu who invented the first tablet, not Steve Jobs. Steve Jobs invented iPhone and Nokia invented smartphone while Microsoft invented Windows and not operating system but it was Apple who invented GUI. The list goes on…

Therefore, Fujitsu has all the capability that you need to solve technical problems including invention of the K Computer.

Finally, Craig concluded that the ultimate vision is having digital world under-pins the physically world. 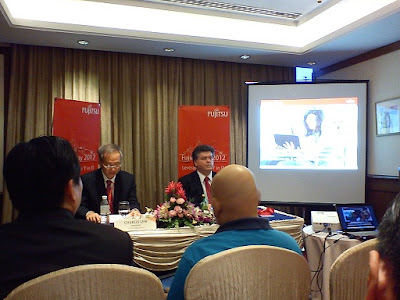 
Fujitsu provides solutions for everything ?

Not really... They want to be the integrator of all solutions for all kind of problems in the world to their ecosystem; the Human-Centric Intelligent Society. Got it ?

More information on Fujitsu Day 2012. And if you still want to know more about how capable Fujitsu is, check out the web site.

You know what, let’s go for dinner.