on October 14, 2012
As the IT world expands itself rapidly, it has managed to change entertainment and also create a new media landscape in the digital world. By just keying in key words, all kinds of information, images and videos can be found online on all sorts of platforms.

These days, cinema operators and film makers are also finding it challenging with the emergence of YouTube, whilst conventional print publications are fighting to stay ahead in news reporting with online media. It has also changed many individuals’ lives as they learn to fully utilise these modern IT tools available to them as their means to communicate to an audience out there. These individuals whom are called YouTubers, have also managed to make a career out of this new platform with a steady following of fans.

a. what is the fun/potential do you see in “Youtube market”?
b. what makes you became a “youtuber” ?

Grim – Jared : The “Long” hit 406,722views – feel happy – also a reason & force for them to be a “youtuber”. Since young like to make story out from toys, talking & fighting each other; now I write them on paper. But to write a book – longer time & process – filming is faster and more fun.

JG- Germani: like to share and act. Wish to be actor if possible, but currently there is no invitation from production house…

a. What is the potential you see in the “youtube market”? (could be commercial/ personal/ emotional…) whoever like to watch our video – through the comment, knows viewers are abroad – feel happy & proud
b. Do you cross over with other “youtuber”’s video? Yes. Sometimes they act in each other video – there was a collaboration with other Youtubers, namely “OMG (On Malaysia Grounds)”

a. Where do you get the production cost? Not cost, volunteer actors. Sometime approach strangers if they willing to cast in their video – the respond is good – some drop them message to hbe volunteer. – base on the story to look for shooting venue – sponsor. – with basic shooting equipment.

Dan: good to start from less resources – learn the hard way to make things done – so they appreciate when things grow later.

Grim-Jared: if do not get the right scene for venue, they will make changes/readjust the storyline.

Grim –Jared: At the moment we are not yet, but it is possible when:

i. Client likes your video style - partnership with client to produce a video message on client’s services/products
ii. the subscribership - Client want to use you platform to send out message, e.g advertise, announce Other Youtuber like they have ads placement on video, like Kyopropaganda, Dan Khoo

c. How to advertise / market your clip in “Youtube”, as your video is just another video in the “Youtube” video bank.

All agreed that video with Love element sells – because it is a common thing and it relates to audience’s experience. Other genre like humor & horror is welcome too. But action may not suitable in youtube - has many technical details to take care.

a. Does “youtube” have copyright / censorship issue the video clip? Experience…

There is no censorship issue so far and they try not to touch on sensitive topic like religion.

G Jared : we will put credit /notation on sources that we borrow/use, but very seldom. We ask people to produce music for us.

*Grim & Ming Thing have own band

b. Opinion on : Is “viral” media infringing the copyright ?

--> no direct respond on this…

c. What are the key element(s) makes it viral?

i. Can “viral media” be produced? Or it is just meant for amateur ?

All: Yes, we know some agency out there is doing it …. But we don’t really concentrate on that - just do the content that we like – if considering will it viral – it constrain the creativity & story

All of them wanted to change and contribute the local media industry – from the digital media aspect – and they are inspired by Yasmin Ahamad.

G Jared: People look at youtubers as unprofessional compare to the production house - sometimes even have client request for a video client tend to press their price low. 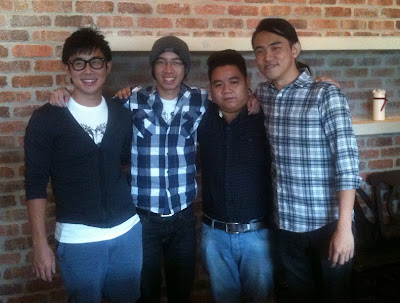