Larry Ellison Keynote – The Oracle Cloud – Where Social is Built-in

on October 03, 2012
The day was Oct 2 2012 (Moscone Center, San Francisco) and I was getting all ready to have an up-close with one of the ICT world’s most famous person and one of the richest person on Earth; Larry Ellison, CEO of Oracle Corporation.

Yes, most of us who use the computer know about Larry, especially for IT graduates like myself. We used to compare and joke about our idols during college times. They are people like Larry, Bill Gates, Steve Jobs, Jerry Yang, Jeff Bezos and etc. My idol was actually Bill Gates at that time, but I really think that I am more of a Steve Jobs person. 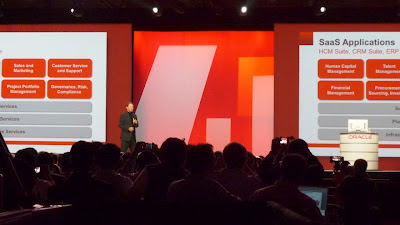 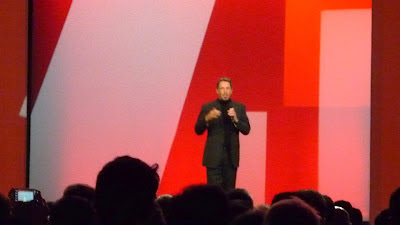 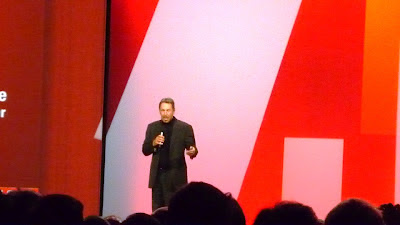 I was excited about today’s event, given that I’ve missed yesterday’s event. I have met Mark Hurd and I thought he was impressive of course and very people oriented.

Moscone North, Hall D was almost full by 2:30pm, 15 minutes before the event was scheduled to start. People came in all with business attire and were pretty much excited to hear from Larry even though we have heard about Engineered System all over the week.

The keynote was started off by Infosys CEO and M.D S.D. Shibulai who told the crowd how Infosys has been involved with innovations and was voted the 19th most innovative company in the world

Soon after that, Larry took the center stage and repeated “Engineered System = Software+Hardware working together.” Got it ??? That simple. No more guessing of definition.

Larry went on to say that all Oracle products are developed using Java, Fusion middleware and Oracle databases. And when a customer uses these products from the cloud, it is also benefiting from a great platform and a great infrastructure, not just a suite of great applications.

Wow! This statement is really powerful, do you get it ? Basically, Larry was making a point of the supremacy of Oracle products with potential zero competition in the entire world at this moment. The question is do you have the budget ?

Now, pay further attention, Larry went on to explain the insights of Oracle’s strategy that it is customer oriented. He said “most existing customers are expected to move to public cloud …” This tells a few things.

1.) Oracle’s current strategy is a further unmatched dedication to service its existing customers whereby due to declining ICT budgets around the world, people are opting for the rent and pay model.

2.) Oracle does not intend to create earthquake to the industry because all these offerings are targeted at existing customers and with minority focus on acquiring new customers. And mind you that Oracle is already the number 1 most adopted and advanced enterprise database application in the whole world, who else hasn’t deployed Oracle database ?

He went on to say that adopting Fusion applications is a life changing decision for customers because users are given option to plug in and plug out at any time. And it is the only cloud company that gives customers choices of deployment, be it private, public or hybrid cloud scenario.

Deployment of private cloud means that customers can put Oracle products inside their own premises, protected by own Firewalls but Oracle owns the products (software and hardware) and will also be responsible to maintain the support it. Mark Hurd, Oracle President described this as a big deal !

Larry then threw another blow to the audience by saying that “just because it is in the cloud doesn’t mean we don’t have to do anything technical again. ”

“Running application in the cloud still requires computer," He added.

He was tackling multi-dimension issues with one blow. Specifically, many analysts are concerned about how the job market will be affected when cloud computing initiative such as Oracle’s going full scale and Oracle is going to rule the world with new world order, which is not true.

Another issue regarding the possibility of losing control when cloud computing is implemented, which is also not true.

What Larry was trying to explain was the cloud computing strategy should be viewed as a lucrative option for customers to deal with today’s challenges of declining IT budgets, IT-alignment exercise and the trend of making IT to directly contributing to profits.

He then went on to explain the Oracle social relationship management platform.

“It is a platform, not just marketing,” said Larry.


For instance, when users making sales invoices, it can also trigger the social engagement and monitoring functionality for analysis purposes.

Larry ended his keynote by presenting a demo on big data using Engineered System. The demo intended to figure out one simple question which may take hell to calculate. “Which recent Olympic 2012 celebrity is most suitable to be selected as ambassador to carry the product of Lexus LFA ?”

To do that, it made use of Oracle Business Intelligent suite, Endeca and Oracle database deployed on Exadata to analyze 4.9 billions tweets from Twitter’s Firehose by analyzing both structured and unstructured textual data. Based on the dimensions of tweets, relationships, mentions, hashtage and authors, it was eventually decided that the person most suitable for this job is Gabrielle Douglas beating Michael Phelps in second place.

The best part is that big data processes run real-time on Engineered System – and this is the real deal. It will change the world!

My thoughts on Larry's keynote is - he is really smooth and I just love to hear him speak in a direct-tone manner, extremely engaging and inspiring.
Cloud Computing Oracle People trends