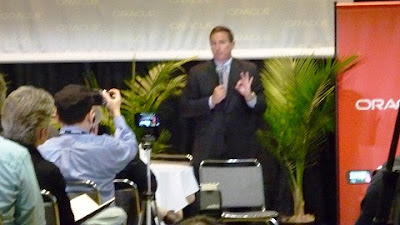 The red-stack is envisioned to be the best of breed technology in every layer of the stack.

Make use of the red-stack and integrate into hardware to become the Engineered System. There are two types of Engineered Systems. 1.) Exadata and Exalogic (Intel and Linux based) and 2.) Supercluster (Solaris and SPARK based)

There are two parts to this.

3.1) Cloud benefits - customers will need the Engineered System when they are thinking about having three things.

1.) Cloud implementation – virtualization, software as a service and etc.

3.2) Cloud architecture – all products are built modularly and customers get to buy products modularly as well.

Before Engineered System, Oracle already has a range of industry applications which are better known as industry solutions. Each solution is created out of integration of a combination of Oracle products (which provide horizontal functionalities), best practices and vertical software modules. For instance, the eClinical solution for life sciences runs as a software module on Siebel.

So now with Engineered System, Oracle is able to deliver end-to-end industry functionality through by integrating with customer and third party applications.

Basically, the whole idea of Engineered System is to tell that Oracle is now selling super computer. Prior to this (before acquiring Sun Microsystem), it was selling solutions

Mark Hurd told that Oracle has invested over billons of dollar on merger and acquisition exercises in 2011 alone. All these have contributed to the reality of the Engineered System today.

To recap, the Engineered System is 6 feet tall and it offers the following benefits for customers.

“Customer can run Oracle cloud behind their firewalls,” said Mark Hurd. “And this is big deal!”.

Regarding the financial industry, Mark Hurd opined that it will still take time for these people to adopt Engineered System because banking systems are much more complicated. Most core banking solutions are still running on decade old mainframes. However, Oracle has recently launched a standard banking solution as a way of penetrating the market.

Here is my own take. The trend is moving towards the scenario which people are buying less PC and Servers and adopting public cloud. Therefore, Engineered Systems is the answer for Oracle in terms of selling hardware because Engineered Systems are not just plain servers, it is hardware + software. By doing this, one stone kills two birds. Not only Oracle gets to sell hardware, it is also able to maintain and expand its horizon on its lucrative and highly successfully software business.

Another area to put our thoughts into is the trend of enterprises adopting standard software ?

Ideally, the cloud should make out of horizontal software modules which have the capabilities of integrating with verticals.

Mark added that Oracle is currently investing heavily in Latin America and China.

On competition with Salesforce.com, Mark said that SalesForce is mainly focusing on providing software on sales automation in the cloud. Oracle has a better capability in such area except that Salesforce was much earlier in the market and they have edge on that, but they do not have the hardware+software strategy.

Finally, Mark Hurd revealed what he thought was exciting in the area of social media. “The ability to look at tweets real time by police. That is where Oracle is moving in terms of social media,” said Mark Hurd.

This is a confirmation of what I have said in earlier post about Oracle’s Strategy when I first landed on San Francisco for the Open World 2012.
Oracle Strategy trends