Nov 22, 2012 - Brother International Malaysia, a leader in home and business IT peripherals that focuses on the ‘Customer-First’ approach is raising the bar on industry trends and technology advancement once again by introducing a new series of embroidery and home sewing machines featuring a multitude of built-in licensed DISNEY characters templates: the Innov-ís 4500D and Innov-ís 1500D that offer precise performance on any project under the needle for homes, SOHOs customers and the textile industry.


Both machines include intuitive features designed to save time such as:


Malaysians made the difference for those in need

Nov 22, 2012 - In yet another demonstration of the kindness of everyday Malaysians, 14,098 people contributed a total of over RM 140,980.00 to the “Be The Difference” campaign, an online collaboration by Groupon Malaysia, Miss Universe Malaysia Organisation and GRIM FILM to create greater awareness and support for 17 Malaysian charity organisations. 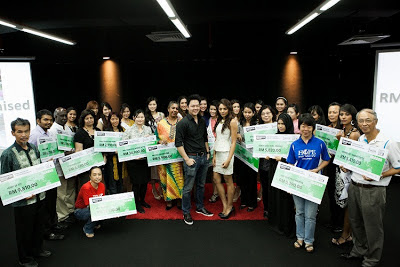 Mr. Joel Neoh and Ms. Nadine Ann Thomas along with the 17 finalists of Miss Universe Malaysia 2013 and the representatives from the 17 organizations at the cheque presentation ceremony of ‘Be The Difference’ campaign.

Online shopping allows Malaysians to reclaim 36 hours of their life

Nov 22, 2012 - According to a survey by market research firm GfK, commissioned by online payment solutions provider PayPal, online shopping can help Malaysians get back about 36 hours of their life during the coming festive seasons.

The new PayPal survey shows that Malaysians plan to do half of their holiday shopping online this year, saving 36 hours of their precious time.

PayPal head of marketing, Southeast Asia & India, Klas Hesselman said that this was good news for Malaysians who are avid shoppers but find shopping a challenge when they have to spend hours stuck in traffic jams, battling the crowds, and then waiting in long queues to pay. "With the time they save by shopping online or on mobile devices, 81 percent of Malaysians would spend more time with their family, 69 percent would use the extra time relaxing through exercising or taking up a hobby, and 53 percent intend to hang out more often with their friends."

Nov 20, 2012 - IBM has selected the state of Negeri Sembilan to receive an IBM Smarter Cities Challenge grant next year;2013. Negeri joins 30 other cities from all over the world that gain access to some of IBM's top experts who would analyze and recommend ways the state can become an even better place in which to live and work.

Launched in 2011, the IBM Smarter Cities Challenge is a three-year, 100-city, US$50-million competitive grant program. The program, which is IBM's single-largest philanthropic initiative, assigns a team of six top IBM experts to each winning city to study a key issue identified by the city's leadership.

In 2012, IBM provided expert counsel to 33 cities worldwide who had earned IBM Smarter Cities Challenge grants. These included engagements in:

The GCP aims to help web professionals improve their theory and practical application of Google Adwords. When they pass the required exams to become Individually Qualified, they will receive a certificate verifying their achievement. They will also have an Individual Profile page shareable with interested parties. As this qualification indicates an achievement of a standard of knowledge, it has value on a resume or otherwise used to market skills as an account manager.

Step 1 - Visit the Malaysian GCP challenge website at www.google.com.my/ads/getcertified/
Step 2 - Check your eligibility for the challenge
Step 3 - Register to be in the running
Step 4 - Sit for your exams online between November 26 and December 23, 2012
Step 5 - Submit your results to the same website between November 26 and December 23, 2012 for a shot at winning a Samsung Galaxy Note 2 or Samsung Galaxy S3

The GCP is an initiative to help advertising agencies and runners to capitalize on Google's advertising ecosystem for their businesses - it is something good.

The CH702 is pre-installed with Fujitsu’s new proprietary software, Diary and Scrapbook, that are convenient, fun and original applications that let users organise tasks, announce important updates, enhance photos, collate interesting information, and share on social media platforms such as Twitter or Facebook.

Nov 16, 2012 - The Prime Minister, Dato' Sri Najib Tun Razak announced 20 new projects, including 11 under the Economic Transformation Programme (ETP) and nine in three Economic Corridors, at the Pullman hotel in Putrajaya on 16 November, 2012.

Of significance to enterprise IT and cloud computing are investments by CRF Computer Recovery Facility Sdn. Bhd. And GPSTech Solutions Sdn Bhd.

A SAN switch will connect server to storage devices directly via fibre. The communication protocol is SCSI.

SAN works like DAS (Direct Attached Storage), both operate as block level data storage. SAN can be regarded an extension of DAS for the network.

If a SAN switch and Ethernet switch are connected to form a network, then there will be a mapping layer to cater for communication using various protocol standards such as HyperSCSI, mapping of SCSI over Ethernet

SAN and NAS are different in terms of protocol. SAN operates faster than NAS because it operates at a lower level.

Anonymous said…
I'm not sure where you're getting your info, but good topic.

I needs to spend some time learning more or understanding more.
Thanks for wonderful information I was looking for this info for my mission.

Anonymous said…
Thank you for every other informative web site. Where else may just I am getting that type of information written in such a
perfect way? I have a venture that I'm simply now running on, and I have been on the glance out for such information.

Anonymous said…
When someone writes an post he/she retains the thought of a
user in his/her brain that how a user can know it. Therefore that's why this post is great. Thanks!