on November 05, 2012
nexTier Networks Inc (nexTier), the company that is revolutionizing information security and data leak prevention through its unique semantic analysis technology, announced that it has appointed Powerbloc Generation (M) Sdn Bhd (Powerbloc) as the authorized distributor of its Data Leak Prevention (DLP) solution for Malaysia, Indonesia and Singapore. The solution is to help organizations prevent malicious leaks of sensitive information and mitigate data security risks. 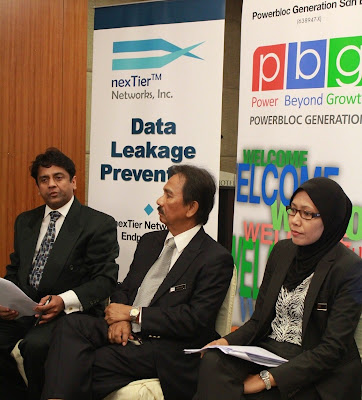 Data Leak Prevention (DLP) as the name speaks for itself; is a technology which helps to control illegal possession of confidential data.

Truth to the matter is that 61% of data thefts are intended or malicious which went undetected. nexTier DLP solution and technology works by monitoring data located across the enterprise and determining that data’s security value to the business. In essence, it is based on heuristic and semantic technology which is similar to those powering anti-virus technology.

nexTier’s patented semantic analysis algorithms can auto-classify data/information, correlate that information to the identity & roles of actors in the enterprise and use that 3-dimensional correlation as a means of enforcing securities policies against that data. Resistant to evasion, the algorithm can determine the origin of information even if it has been retyped into a brand new document or rearranged and reworded in an evasive manner.

Mr. Tarique called this a paradigm shift for data leak prevention technology where it addresses solutions in a much holistic manner. The technology is currently considered to be 4th generation DLP which it has the capability to support unstructured semantic analysis. This allows the solution to automatically identify and classify data/content regardless of its modality; be it either structured or unstructured.

The product is nexTier’s Compliance Enforcer (CE) DLP which is a network based solution enforcing security controls at network endpoints. It is pre-configured as a rack-mountable appliance. It is also known as the semantic firewall. Among its coolest features are:


nexTier’s Compliance Enforcer (CE) DLP supports text, image and video data analysis. To get started is easy, all users have to do is to perform role-based (duty of employees) segmentation for data classification using software available.

It also works with encrypted data where known encrypted technology (SSL, VPN and etc) has to be declared in the settings in other to authorize sniffing of such data.

This is the most exciting time for Powerbloc to be appointed as the authorized distributor of its Data Leak Prevention (DLP) solution for Brunei, Malaysia, Indonesia and Singapore.

It was just not more than 3 weeks ago that on Oct 23 2012, Information, Communications and Culture Minister Datuk Seri Rais Yatim has confirmed that the Personal Data Department has been setup up finally and the Personal Data Protection Act (PDPA) will be enforced by Jan 2013.

It enforces that ‘personal data’ manipulation is subjected to legal consequences when it comes to commercial activities, only. This includes misuse and mishandling of information by enterprises which can come under the category of malicious data leak – nexTier DLP solution is just in time for Malaysian enterprises to deal with PDAP enforcement.

Powerbloc was setup in 2004 and has been very focused. It provides end-to-end integrated IT security solutions and services to enterprises in the private and public sectors.

It has been F-Secure’s authorized sole distributor ever since and currently also is the value added distributor for iPrism and Accellion. Its client includes all major public sector agencies and GLCs and those from the private sectors such as IOI Corporation Berhad.

General Manager of Powerbloc, Sri Utami Dewi Hj Kasman said, "No other security provider provides such a contextually-aware and complete suite of DLP solution in the industry today that comes with built-in semantic analysis and automated security policy management. The partnership with nexTier will allow us to offer the benefits of this technology to the Malaysian market, to help organizations reduce the risk of negligent or malicious disclosure of confidential and sensitive data”.

She added that financial institutions and the public sector will be Powerbloc’s key target markets for nexTier’s DLP solution in Malaysia. The company has appointed Night Electronics (M) Sdn Bhd and MSP Systems (M) Sdn Bhd as two of the channel partners to resell the solution.

nexTier is currently based in Santa Clara where most of its software architects are based and having a R & D center in Lahore, Pakistan.

Its founder and CEO Mr. Tarique Mustafa is the brain behind nexTier 4th generation DLP technology. He is hailed from Mechanical engineering background and did his Doctoral Studies in Computer Science in University of Southern California (USC) through the prestigious Rotary International Scholarship for Computer Science.
Networking nexTier Networks Powerbloc Security