on April 10, 2013
The most significant news for week 2 of Feb 2013 was Oracle launched industry’s first one-stop platform for monitoring and managing improved social interactions.

Now, in case you missed them, the most important happenings for last one week or several weeks ago were:

To provide the agile, application and services-centric campus network organizations need today, Brocade has delivered the Brocade® HyperEdge™ Architecture, an evolutionary approach to campus network design. By automating and simplifying the campus network, and creating a holistic wired and wireless infrastructure, the Brocade HyperEdge Architecture enables organizations to harness the productivity gains and competitive edge that mobility, cloud-enabled services and new applications can offer.

Basically, a Campus Network or CAN (Corporate Area Network) is bigger than LAN but smaller than WAN.

Tata Communications, a leading provider of A New World of Communications, today announced that it has been selected by Mott MacDonald as its global telecommunications partner for the next five years in a deal worth over $20 million. Tata Communications was chosen as a result of its comprehensive range of integrated and unified communications solutions – solutions that will allow the diverse global management, engineering and development consultancy to consolidate its multiple regional systems onto a single platform. The move will create new levels of global collaboration as well as a solid competitive advantage.

Under the agreement, Samsung notebook PCs, tablet PCs, smartphones and phablets (like the Galaxy Note II) will be distributed by ECS’s subsidiary – ECS Astar Sdn Bhd’s nationwide network of resellers and corporate dealers – to the Malaysian business community.

The two parties are no strangers to each other, as the domestic ICT distribution market leader has long been a distributor of Samsung’s pioneering technologies, including its notebooks, tablet PCs, LCD monitors, Large Format LCD and etc.

Sourcefire has appointed John Becker as Chief Executive Officer effective immediately. In addition, Sourcefire today announced that Kevin Klausmeyer has joined its Board of Directors as an independent director.

Mr. Becker said, "I am honored and excited to be named Sourcefire's CEO. As a board member, I have witnessed firsthand how Sourcefire has established itself as an outstanding organization based on innovation, industry leading solutions, a diverse go-to-market model and a strong company culture. I look forward to building on this solid foundation as we continue to drive the future of network security, capture our significant market opportunity, and grow the Company." Mr. Becker remains a member of the Board.

Prior to his appointment as Chief Executive Officer (CEO) of Sourcefire, Mr. Becker was CEO of ScienceLogic, a provider of network monitoring software, from April 2012 through March 2013. Previously, Mr. Becker was the CEO for Approva Corporation and Cybertrust. Mr. Becker holds a B.S. in Business Administration from the University of Richmond.

“The Search for the Cebu Pacific Juan Blogger” in Malaysia and Singapore is complete! Today, Samuel Chew from Malaysia was named as the first ever blogger ambassador for Cebu Pacific Air, the Philippines' largest national flag carrier.


"Samuel’s very creative and entertaining safety demo dance video represents Cebu Pacific’s young and fun culture. Readers of his blog will soon be able to learn more about Cebu Pacific and how fun it is in the Philippines over the course of the year. We look forward to welcoming Samuel to the Philippines soon,” said Candice Iyog, Cebu Pacific Vice President for Marketing and Distribution.

As the "CEB Juan Blogger," Samuel (from seraphsam.com) and a friend will travel to four destinations in the Philippines, where they will enjoy two nights hotel stays in each destination with compliments from Agoda.com. They will explore key cities in the Philippines including Manila and Cebu, as well as two of the 32 other domestic destinations CEB flies to, such as Iloilo, Clark, Palawan or Davao.

InMobi, the world’s largest independent mobile advertising network and technology provider, swept six awards for mobile campaigns they executed in partnership with several top agencies and their clients. The first ever Mob-Ex Awards in Singapore on 21 March 2013 led the celebration of the vibrant mobile marketing scene. It was a night to remember for InMobi whose mobile rich media campaigns won the most awards by any single non-agency company. 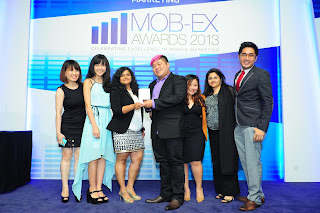 The new system can reduce from weeks to minutes the ramp-up time organizations need to adopt enterprise-class Hadoop technology with powerful, easy-to-use analytic tools and visualization for both business analysts and data scientists. In addition, it provides enhanced Big Data tools for monitoring, development and integration with many more enterprise systems.

Packet One Networks (Malaysia) Sdn Bhd (“P1”), Malaysia and Southeast Asia’s leading 4G operator fondly known for its edgy and catchy marketing campaigns has added another feather to its cap as it took home the Gold for ‘Excellence in Media Strategy’ at The Marketing Excellence Awards for its ‘Tukar Tak Tukar’ campaign. P1 was also the finalist in the ‘Excellence in Advertising’ category for the same campaign.

HTC, a global designer of smartphones, today launched its new HTC Service Centre located at Berjaya Times Square Shopping Mall - Level 7 Lot 7-45, as part of the expansion strategy to enhance customer service for the growing base of HTC users in Malaysia. Mr SK Wong, Country Manager of HTC Malaysia and Mr Jinson Chiang, Head of Global Customer Service Operations were present to witness the launch and ribbon cutting ceremony that officialised the opening the centre.


The 1050-square feet HTC Service Centre will serve as a point of liaison for both HTC’s partners and users. Meanwhile the centre will offer after-sale services, training support, redemption as well as an experiential corner showcasing HTC’s latest handheld devices and accessories.

The new Berjaya Times Square HTC Service Centre will be operating on weekdays from 10:00am to 7:00pm.


EMC announced that 27-year IT industry veteran Thomas (Tom) Zack has been appointed President of sales and customer operations for EMC’s South East Asia (SEA) region. In his new role, Zack will focus on strategy and business development to extend and further accelerate EMC’s growth and continued leadership in the region by delivering and supporting the full range of EMC products, services and solutions in established and new markets, and enhancing partner and channel relationships.

The appointment represents a milestone for EMC’s next phase of business growth in SEA. Zack will play a key role in ensuring that EMC remains deeply focused on helping customers and partners transform IT and deliver IT as a Service through cloud computing, use Big Data to change business models and achieve new levels of innovation, and do so with highly-trusted and secure IT environments.

This means that if your organization does not have branches which host servers remotely, you are not the target market.

If your enterprise-wide organization hosts all servers in a data center under one roof, you are not the target market.

But if your enterprise-wide organization deploys a 'rojak' scenario, high chances you may need it to achieve real time data replication.

Based on my experience, these solution offerings are affordable in it own classification.

The reason is that even though databases will come with own data replication module, nevertheless they don't actually address solution for WAN optimization. Furthermore, Silver Peak's Velocity solutions are optimized for VM and industrial storage solution such as NetApp? ,Dell Compellent, Dell EquilLogic and etc.

In other words, these solutions not only are capable of replicating databases real-time, it actually replicates the whole hard disk for disaster recovery purposes - it is meant for usage by data centers.

Singapore Exhibition Services (SES) will be organising CommunicAsia2013, EnterpriseIT2013 and BroadcastAsia2013 – Asia’s largest and most established information and communications technology (ICT) and media communications events, from 18 – 21 June, 2013 at the Marina Bay Sands Singapore.

CommunicAsia2013, EnterpriseIT2013 and BroadcastAsia2013 are the premier launch pad in the region which consistently attract the world’s leading companies to showcase the latest game-changing technologies and products that will shape the future of communications.

A joint panel discussion has also been conceptualised. The ‘Thought-Leaders Panel’ of C-level executives will bring together telco companies like global satellite operator MEASAT, as well as broadcast companies like multi-media and content creator, Media Prima Berhad, to identify opportunities for collaboration between the telecom and broadcast industries.

Malaysia will also be strongly represented at the conferences. Key local speakers include Suresh Sidhu, Group COO from Celcom Axiata, Paul Brown-Kenyon, CEO of MEASAT and Wee Jonn Leow, Co-Founder / Managing Director of Zalora Malaysia who will be presenting at CommunicAsia2013 Summit. Brian Lenz, Chief Innovation Officer from Astro and Dato Amrin Awaluddin, Group Managing Director of Media Prima Berhad will be presenting their views at the BroadcastAsia2013 International Conference, and Michael Lake, CEO of Pinewood Iskandar Malaysia Studios will be speaking at the BroadcastAsia2013 Creative Content Production Conference.


Oracle’s new SPARC T5 servers have set 17 world records and are the world’s best platforms for enterprise computing at any scale, delivering the best value for database and enterprise applications.