on May 03, 2013
The most significant news for week 4 of Apr 2013 was Digital Malaysia having launched the POKOK platform.

Now, in case you missed them, the most important happenings for last one week and current week.

Tata Communications has signed a video contribution and distribution agreement with iStreamPlanet, which enables both companies to provide multiscreen, live linear streaming services for content owners, aggregators and distributors around the world.

Content providers are under increasing pressure to deliver live streaming video to meet viewer demands for an ‘always-on TV-like experience’, where they can tune in across multiple devices to access both ‘TV anywhere’ and ‘pop-up’ channels. This deal makes the transport and distribution of live video content to any device at any location easier than ever.

Today Groupon (www.groupon.my) announced the debut of the popular free app Groupon HD for iPad to Malaysian shoppers. With Groupon HD, subscribers can now use their iPad devices to buy and redeem Groupon deals from their favorite local merchants, as well as Groupon Goods and Groupon Getaways deals.

"We are always looking to bring value to our customers and we hope that with the addition of our iPad app, our customers will be able to enjoy a better shopping experience with us," said Rafiq Razali, Country General Manager of Groupon Malaysia.


Other highlights of Groupon HD for iPad include:

Silver Peak provides the industry’s fastest software WAN accelerators that allow customers to move more data, over longer distances, and in a shorter amount of time. The Silver Peak products deliver more than a gigabit-per-second of optimized throughput, making Silver Peak 10-times faster than the nearest competition—Riverbed Virtual Steelhead. Anyone can download Silver Peak software for a free, fully-functional 30-day trial with full support. Silver Peak is also the only company to deliver multi-gigabit performance on all standard hypervisors, including VMware vSphere, Citrix XenServer, Microsoft Hyper-V, and KVM.

With a total distance spanning approximately 8,000 km, BBG is set to provide an alternative route to Europe for TM’s IP traffic. This diversity is essential especially in the earthquake prone zones in the Pacific Ocean Region and will also complement the other cable systems which TM are latched on to.

The BBG cable system is designed to provide upgradable and transmission facilities by adopting the state-of-the-art 100Gbps technology. This cable system is expected to carry commercial traffic by end of 2014.

At the event, some Grouponers and customers came dressed up for the occasion. Brendan Wong Khim Hann, 12 who dressed as the Iron Man himself along with his father, Victor Wong Wai Tsung, 42 as Captain America, took home the ‘Best Dressed’ award, where they won a Mini Instax Camera. 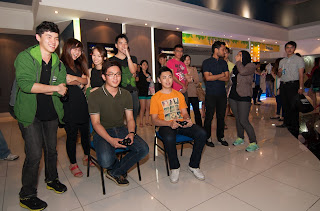 A huge fan of Ironman himself and the Country General Manager of Groupon Malaysia, Rafiq Razali said “I am glad that Groupon was able to bring this night of fun and games to our customers and I am sure they have enjoyed the movie premier as much as I did. We at Groupon are thrilled to see such a turn out which is a reaffirmation of the strength and confidence in the Groupon Promise and we hope to continuously adhere to our founding principle of delivering the Groupon Experiences.”

The Process Player enables modeling-to-execution within the Business Process Composer allows business analysts to validate, test and playback the business process identically to the end user, ensuring that its design meets the business and customer needs.

Engineers go on sites and may require additional technical supports from colleagues stationed in the command center in the office.

Studies have shown that remote support is much more efficient if on-site and remote engineers can share a visual representation of the site workspace and the on-site engineer's actions. To date this has been accomplished, and only in part, by on-site engineers using hand-held cameras, mounted head-gear or specialist glasses.
The new system - which is based on ombination of augmented reality and robotics - provides the supervisor with complete visual independence and a more stable video image; on-site engineers are able to work with greater freedom or, in the case of those with specialist glasses, freed from the tiring need to re-focus their eyes.

Lazada, Southeast Asia’s fastest growing online department store, had recently celebrated its first year in Malaysia with a big bash during which the media and its business partners got an exclusive look into the business, its accomplishments in 2013, and the future looks like.


With more than 12 categories to choose from, Lazada makes shopping online a breeze in Malaysia. From tablets, cameras, home appliances, health & beauty products, sports, books to baby items, there is something for everyone.

Anonymous said…
If you would like to get a great deal from this post then you have to apply such techniques to your won webpage.

Anonymous said…
You don't really desire to say, "I'm the very best broker ever that can match any product with any customer cash til payday loan the process of finding a merchant money advance can be usually much shorter, allowing you to
begin on the eco-friendly renovation sooner.
Apr 29, 2013, 8:22:00 PM

Anonymous said…
I think this is one of the most vital information for me.
And i am glad reading your article. But want to remark on few general things,
The web site style is wonderful, the articles is really
excellent : D. Good job, cheers