I've read from; The Telegraph,no-follow,http://www.telegraph.co.uk/news/worldnews/northamerica/usa/10403598/World-leaders-had-their-phones-monitored-by-US-spies.html; that it was was reported, some prominent people had been subjected to cyber espionage abuse that could have been originated from the U.S.

It was reported that the German chancellor had taken U.S' authority to tasks over the matter. 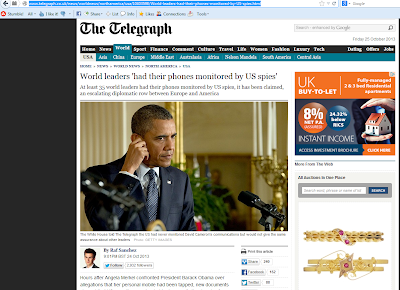 Though the study is US-centric, we believe that you might find the findings and especially the infographic interesting as it’s the first survey dedicated to uncovering the online habits and behaviors of individuals ages 50-75, Fifty Plus Booms Online.

The study indicates that the 50+ demographic is spending a great deal of time online these days (an average of five hours a day) to the point of feeling confidently tech-savvy and engage socially online. This exposes themselves to social media reproach and dangerous security risks, including sharing personal information with strangers.

Kaspersky Lab is pleased to announce the release of a new free app to ensure users are safe while surfing the web on their iPhone and iPad devices. The new Kaspersky Safe Browser for iOS is now available from the Apple App Store.


Kaspersky Safe Browser for iOS blocks links to phishing sites and other web-based resources that can be dangerous for users. The new application can also filter content according to selected user criteria. This way, users can automatically block pornographic sites, material containing violence or profanity, gaming sites, social networks, chats, forums and more. There are 17 pre-defined content filtering categories in total.

IBM announced a new cloud solution that combines software analytics and cloud security services to fend off web-based Distributed Denial of Services (DDoS) attacks for organizations doing business on the web and in the cloud. The new software and services are based on a partnership with Akamai Technologies, Inc.

As a result of monitoring of 4,000 clients, IBM found that DDoS is on the rise.

WatchGuard Dimension TM offers users a menu of visibility and reporting options to present the information in the way they find most intuitive. Its features include the Executive Dashboard that shows top trends, clients, users and applications, Summary Reporting, which provides a reporting function with more than 70 templates, a Hierarchical TreeMap which filters traffic and draws your attention to critical information and the Global ThreatMap, which features multiple, interactive configurable views on a world map, making it possible to have real-time views of threats per region.

Another major highlight, would be the addition of WatchGuard Data Loss Prevention solution to the platform. The WatchGuard Data Loss Prevention solution, essentially streamlines compliance with primary regulatory standards in key markets worldwide. Users are able to select from a pre-configured library of over 200 rules that monitors multiple file types, standards and sensitive data. This will allow companies to promptly protect data and prevent costly regulatory violations. The solution has an updated Web User Interface compatible with mobile devices, and tremendous new flexibility in the configuration of VPNs in today’s more complex network environments.

I've read from;USA Today,no-follow,http://www.usatoday.com/story/news/nation/2013/10/21/fbi-cracks-silk-road/2984921/; that the FBI has successfully brought down a cyber-underworld organized syndicate which exposed itself as the Silk Road web site.

According to the report, the authority has since arrested Ross Ulbricht, the alleged operator of Silk Road.

Silk Road uses a technique known as 'The Onion Router' or TOR which enables tracing real location of servers almost impossible by relaying messages across a virtual network consists of TOR software installed on supporting servers.

Apparently, the FBI was able to trace the untraced through extensive knowledge of the TOR technology, an open standard developed by The U.S. Naval Research Lab and is now maintained by NGOs - Silk Road had invested too much faith on it and it failed them.

The transaction conducted on Silk Road was based on a virtual currency known as BitCoin. 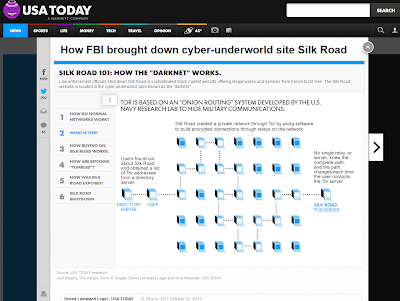