on December 09, 2013
We are back after some period of hiatus - this update is going to be a massive one.

Refer to Computer Security Updates Week 4 of Oct 2013; the biggest news was a report by USA Today about the shutdown of Silk Road by FBI.

Report from;Yahoo - Bernama,no-follow, http://my.news.yahoo.com/hundreds-millions-swindled-banks-past-5-years-mostly-155349378.html; that Malaysian banks were subjected to internal security threats in the form of money swindling, mostly carried out by internal staffs, over the past 5 years.

The reported quoted that overall the banks suffered losses amounting to RM789,106,376 for various types of fraud during the period. 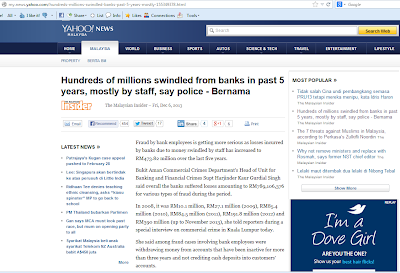 Today, McAfee released the results of a market research survey designed to uncover the extent and risks of unauthorized Software-as-a-Service (SaaS) applications.

The study was conducted by Stratecast (a division of Frost & Sullivan), and found that more than 80 percent of survey respondents admit to using non-approved SaaS applications in their jobs.

Furthermore, IT employees use a higher number of non-approved SaaS applications than other company employees.

Some other interesting results include:
Details.

It was reported by; USA Today,no-follow,http://www.usatoday.com/story/news/nation/2013/12/04/internet-hack-web-cybersecurity/3875333/;that a Chicago-based cybersecurity firm, Trustwave, tracked down a server which was found to have been used by hackers who had stolen these information via software maliciously installed on computers around the world. 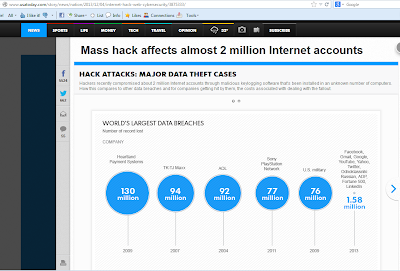 Akamai provides leading solutions for defending Web sites and Web applications by leveraging the scale and intelligence of its global platform to protect against even the largest and most sophisticated DDoS and application-layer attacks. Prolexic combines DDoS mitigation solutions with security operations expertise for protecting data centers and enterprise IP applications.

By acquiring Prolexic, Akamai intends to provide customers with a comprehensive portfolio of security solutions for enterprises and data centers.

Prolexic today unveils the results of a survey of global e-Commerce companies who were asked about DDoS protection and the effectiveness of different types of DDoS mitigation services.

Trend Micro published a report on cyber cimes from Nigeria that involved Ice IX and the 419 scams. The Ice IX is a banking trojan, reportedly heavily utilized by a cybercrime gang that operated out of Lagos, Nigeria.

Beside identifying all relevant details, the report also identified key members of the gang.

ICe IX is known as the first generation of the much publicized Zeus banking trojan - it collects email addresses, bank account and credit card numbers and email login credentials.

The scam was discovered through analysis of trails leftover by the gang.

The 419 scam is referring named the 419 Nigerian penal law that outlawed advance-fee fraud - it was found that the gang was actively involved in such propagation of such scams.

It ware reported by; Yahoo,no-follow,http://my.news.yahoo.com/philippine-government-sites-hacked-anonymous-041222396.html;that a total of seven Filipino government sites have been hacked by Anonymous collective, motivated by social-political agenda.

The hackers apparently calling the government to buckle up by paying attention more to addressing people's needs. 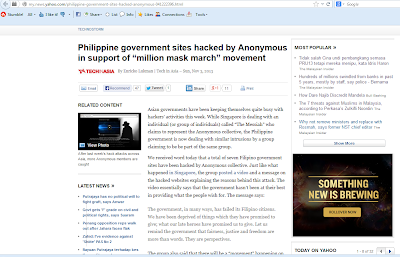 I've read from; USA Today,no-follow,http://www.usatoday.com/story/tech/2013/10/30/nsa-yahoo-google-data-centers/3314793/; it was reported that based on the Snowden leaks, information flows between technology giants Yahoo and Google were intercepted through a program known as MUSCULAR. 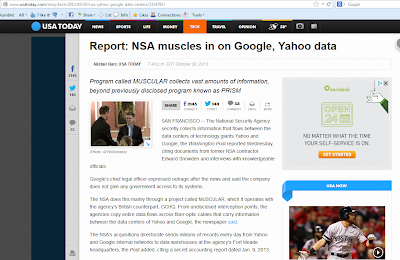 1.) Pay anywhere using NFC devices - you can own the devices too

2.) To prove that user is indeed in possession of the card

As quoted, the IBM technology is based on end-to-end encryption between the smartcard and the server using the National Institute of Standards & Technology (NIST) AES (Advanced Encryption Standard) scheme. Current technologies on the market require users to carry an additional device, such as a random password generator, which is less convenient and in some instances less secure.

The way I see it, the solution offers a chance for the industry to rely more heavily on software platform than hardware for mobile security.

Huawei released a second white paper on cyber security with focus on helping organization coping the burden of cyber security insecurity by including cyber security as part of corporate's DNA and the recognizing the need for international standards and global community support.