Appzilo.com today announced the launch of a new ad network for apps that promises to increase revenue for publishers while providing a more effective way for advertisers to promote apps.

The platform debuts with the VIVA ad unit, which uses the Smart App Banner for promoting apps. Smart App Banners was originally introduced by Apple in iOS 6 and is basically a small and consistent app banner that is displayed on top of website. The banner provides a way for publishers to convert their website visitors to use their apps. If the app is not installed on users' device, clicking on the Smart App Banner opens up the App Store app page. If the app is installed, clicking on it will launch the app.

“Once the user installs the app, the banner basically becomes useless. Appzilo’s VIVA ad unit extends the functionality of the smart app banners by using the space to promote other apps after the user installs the website’s app. This offers incremental revenue for publishers and excellent visibility for app advertisers.“ says Patrick Ooi, co-founder of whttp://www.appzilo.com.

For advertisers, bids are starting at a very low cost of USD 0.01 across all ad units, including VIVA, interstitials and standard IAB units. Robust analytics and Google Analytics tracking are also available for advertisers to measure the effectiveness of their campaigns. Appzilo works across for all platforms including iOS, Android, Windows Phone and BlackBerry.

At press time, several partners with global reach have already signed up including mobile9.com, Newshunt, UCWeb, Twist Mobile, 168.com, MoboGenie, eFun and many more. Publishers and app advertisers can sign-up at http://www.appzilo.com 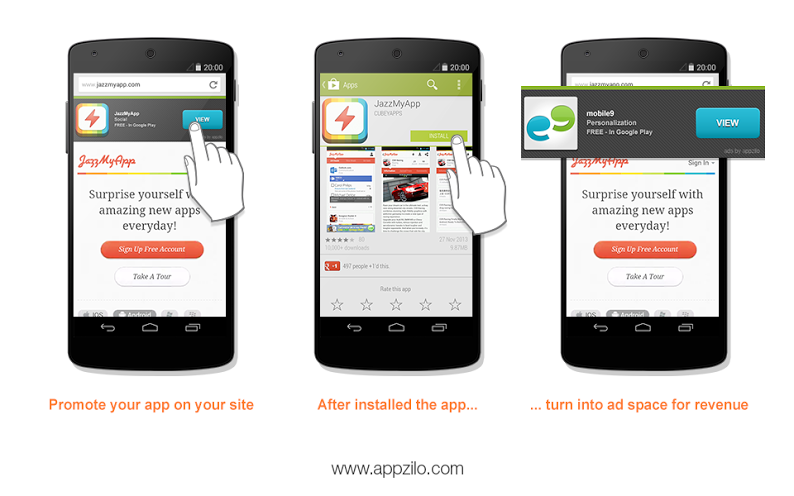