on February 01, 2014
The most significant news for Global Cyber Security Review 2013 was related to Cyber-espionage, Edward Snowden - the biggest hit was the exposure of cyber-espionage related activities involving government agencies - most of the chain reaction was triggered by the leak of Edward Snowden.


For this week / last week, here are / were the biggest news. 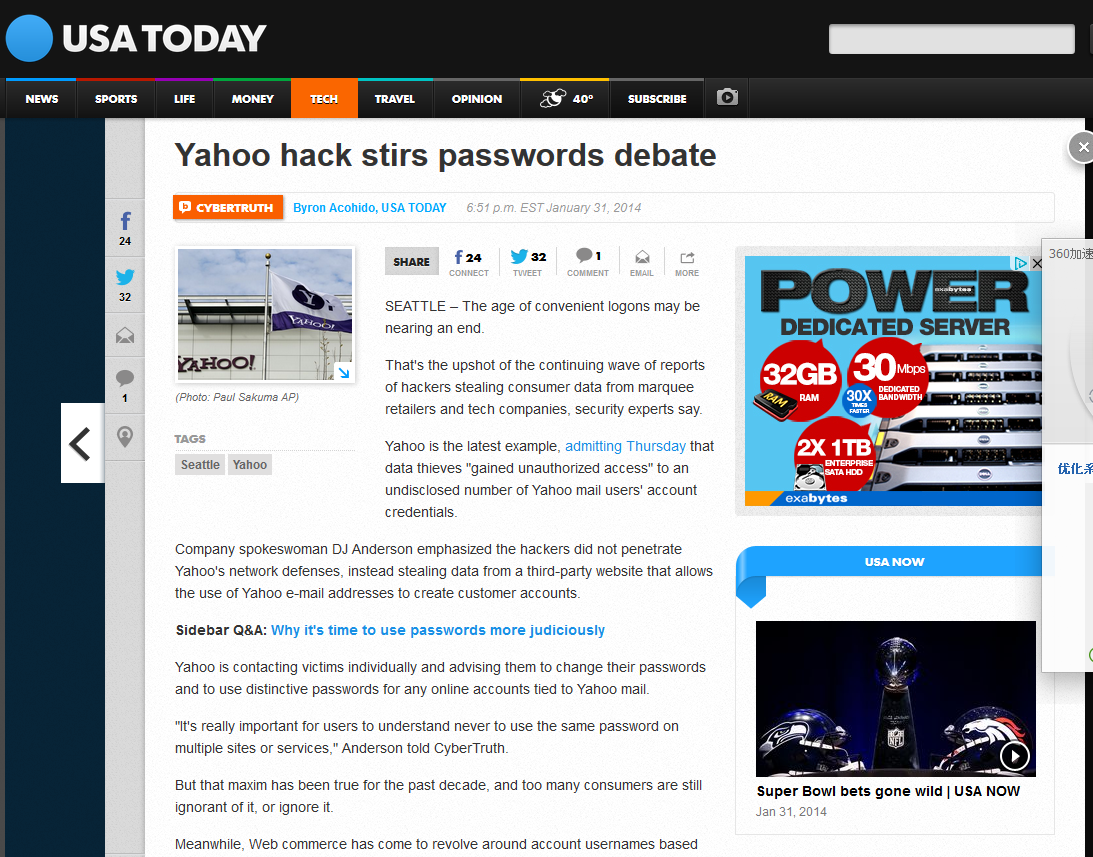 Nonetheless, Yahoo confirmed that the perimeter is pretty much secured and compromises were limited - the stolen data were originated from third-party website that allows the use of Yahoo email addresses for single sign on.

Reuters reported that hackers broke into an Israeli defense ministry computer via an email attachment tainted with malicious sofotware.

The news was broke to Reuters by Seculert. 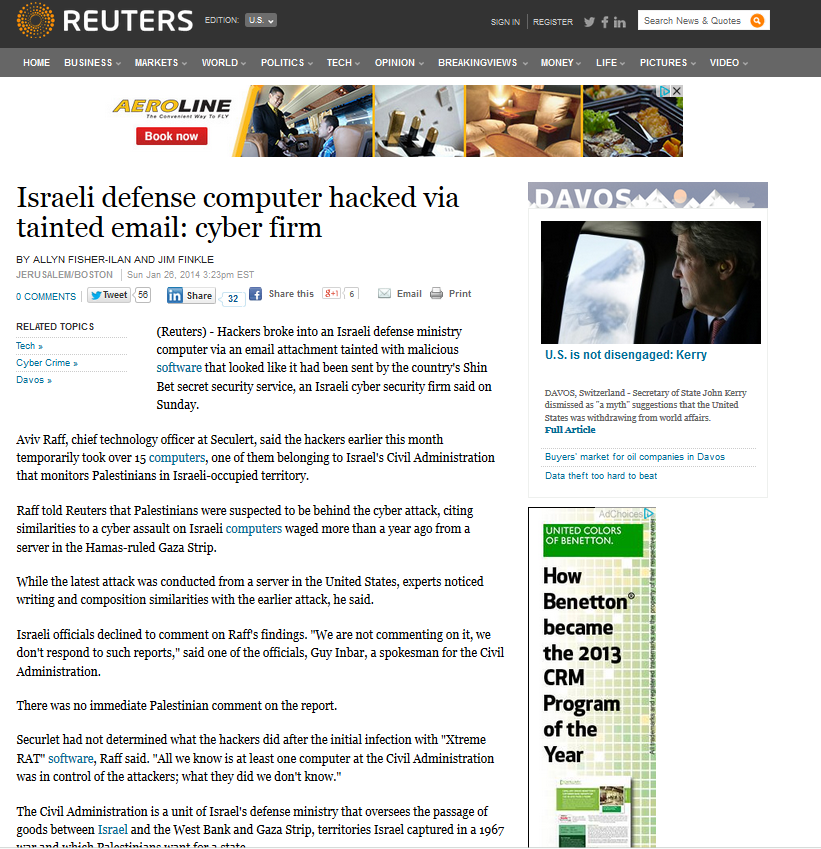 Reuters reported that the FBI has found similiarity in 20 cases in the past years to the malware used against Target Corp recently.

As quoted, the malware is a "memory-parsing" malware that infects point-of-sale (POS) systems, which include cash registers and credit-card swiping machines found in store checkout aisles. 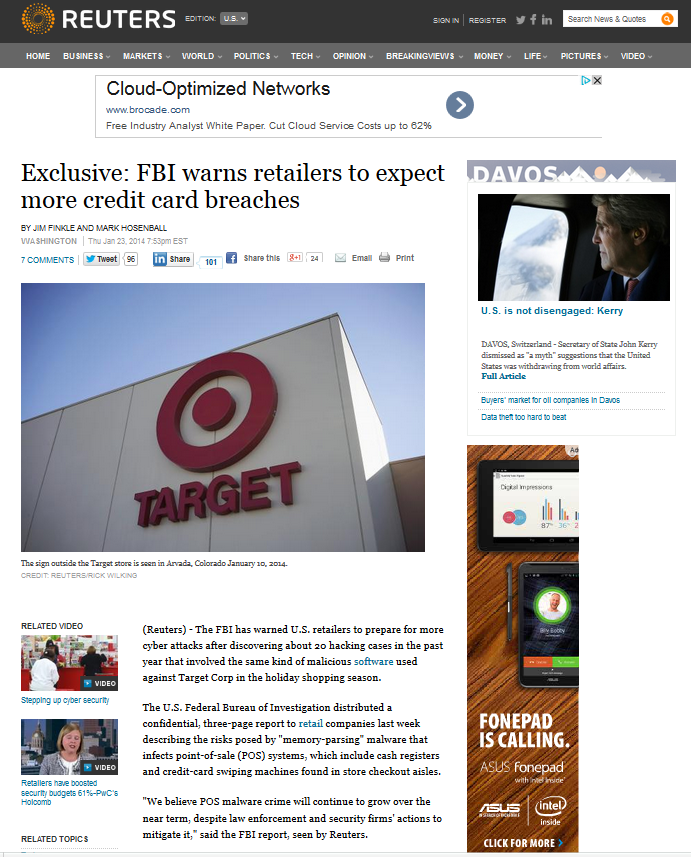 The worm utilizes the PHP 'php-cgi' Information Disclosure Vulnerability (CVE-2012-1823), which is an old vulnerability that was patched in May 2012. The attacker recently created the worm based on the proof of concept (POC) code released in late October 2013.

Symantec researcher found that currently, the worm appears to only infect Intel x86 systems - the exploit code is hard-coded to the ELF binary for Intel architectures.

In lieu to to this, non-Intel based IoT devices such as network routers could be the potential target if the they are unpatched against this threat.

Kaspersky Lab announces that Kaspersky Internet Security, its flagship home user product, has received the “Product of the year” award from the independent testing lab AV-Comparatives after it consistently demonstrated the best results in testing throughout 2013. Out of 22 participating products, Kaspersky Lab's solution was the only one to achieve the top Advanced+ ranking in all of the tests.

Check Groupon First at this festive season to discover the best deals in town, and log on to http://www.cny.groupon.my to find out more about the Groupon Malaysia Chinese New Year ’88 Special’ campaign.

1.) Symantec Messaging Gateway 10.5 now includes Disarm – a new, patent-pending innovation designed by Symantec Research Labs to prevent targeted, never-before-seen threats that occur via email. This technology, which is unique to the industry, inspects all emails for Microsoft Office and Adobe PDF attachments and creates reconstructed versions of the attachments with any exploitable active content removed. Messaging Gateway delivers the email and new attachment to the recipient in real-time.

2.) With Symantec Endpoint Protection 12.1.4 (SEP), Symantec has extended its network threat protection technology to protect Macs. The threat environment for Macs has also become more toxic, with 10 new Mac-specific malware families created last year – almost double the number seen in previous years. Network threat protection keeps users safe from threats they may receive via the browser or other network protocols and blocks the threat before the malicious payload ever reaches the user’s Mac.

Barracuda Networks, Inc., a leading provider of cloud-connected security and storage solutions, today shared that approximately 52 percent companies admitted that managing application performance, availability and security is a significant problem due to a “disjointed, complex and hard-to-manage” environment.

The survey by Freeform Dynamics on behalf of Barracuda, set out to identify the key issues affecting the performance of critical business applications. The survey of more than 400 small, mid and large-sized enterprises, highlighted a fast discrepancy between the capabilities of their network infrastructures and what network administrators need to do their jobs effectively. The findings indicated that many business networks are showing signs of stress when trying to keep up with the demands of the modern workplace.

Prolexic Technologies, today reported that mobile applications are being used in DDoS attacks against enterprise customers. This is one of many key findings found in the company’s Q4 2013 Global DDoS Attack Report.

Data gathered in Q4 from attacks against Prolexic’s global client base shows that mobile devices participated in a DDoS attack campaign against a global financial services firm. Digital forensics and attack signature analysis conducted by the Prolexic Security Engineering and Response Team (PLXsert) detected the use of AnDOSid, an Android operating system tool that performs an HTTP POST flood attack.

Kaspersky Lab is pleased to announce that Kaspersky Internet Security 2014, Kaspersky Endpoint Security for Business and Kaspersky Small Office Security produced the best results in the latest round of Dennis Technology Labs quarterly independent testing (Oct-Dec 2013) in their respective categories.

The success of Kaspersky Lab’s products in all three categories ensured an AAA rating from Dennis Technology Labs.

With consumers increasingly owning multiple connected devices, it has become more important to protect users’ data. For the increased security of consumers, McAfee today announced it will deliver McAfee LiveSafe™ service worldwide as a preinstall on select new HP consumer and commercial PCs.

McAfee LiveSafe is the first cross-device security service that protects consumers’ data, identity and all the PCs, Macs, smartphones and tablets a user owns. Features of LiveSafe service include:

Prolexic’ SOC is staffed 24/7 by the industry’s foremost DDoS mitigation experts and provides DDoS monitoring and protection services to the company’s global client base. Based at Prolexic’s Fort Lauderdale headquarters, SOC DDoS mitigation engineers use more than 20 devices and proprietary technologies to detect and block all types of DDoS attacks, far more than any other DDoS mitigation service provider. While automated anti-DDoS tools and bandwidth reserves are helpful, the skills and availability of Prolexic’s SOC engineers are critical. Many DDoS attacks are concerted efforts by live attackers and, as a result, the characteristics of the DDoS attack can change creatively and repeatedly during an attack.

The six-minute video tour inside Prolexic’s SOC shows the tools and technologies that Prolexic uses to monitor and mitigate DDoS attacks. The video also illustrates how the different roles and responsibilities of SOC staff are coordinated to escalate alerts and block-changing attack vectors in real-time.

According to the results of the Global Corporate IT Security Risks 2013 survey, conducted by B2B International in collaboration with Kaspersky Lab, respondents in Japan expressed the most concern about this growing trend and its associated threats: 93% agreed that BYOD is a threat to their businesses. Companies in North America (69%) also voiced a high level of concern, as did those in the Middle East (65%) and Western Europe (62%). Russian companies were the least concerned, with 57% of participants acknowledging any threat posed by a BYOD policy.

At the same time, most companies do not plan to introduce any prohibitive measures against the use of personal devices at the workplace. On the contrary, about 31% of respondents said they plan to encourage the use of personal smartphones and tablets at work, while another 34% said they did not believe that prohibitive measures would prevent employees from using their own devices.

This survey involved 2,895 interviews with representatives of companies in 24 countries.