on February 21, 2014
News for Week 2 of Feb 2014; the biggest news was the announcement of the planned acquisition of Motorola Mobility by Lenovo.

USA Today reported that Tesla Motors has the intention to build a huge plant to make electric car batteries.

Tesla is reported to be facing difficulties in getting enough batteries from supplies such as Panasonic to keep up with the demand of its Model S electric sedan. 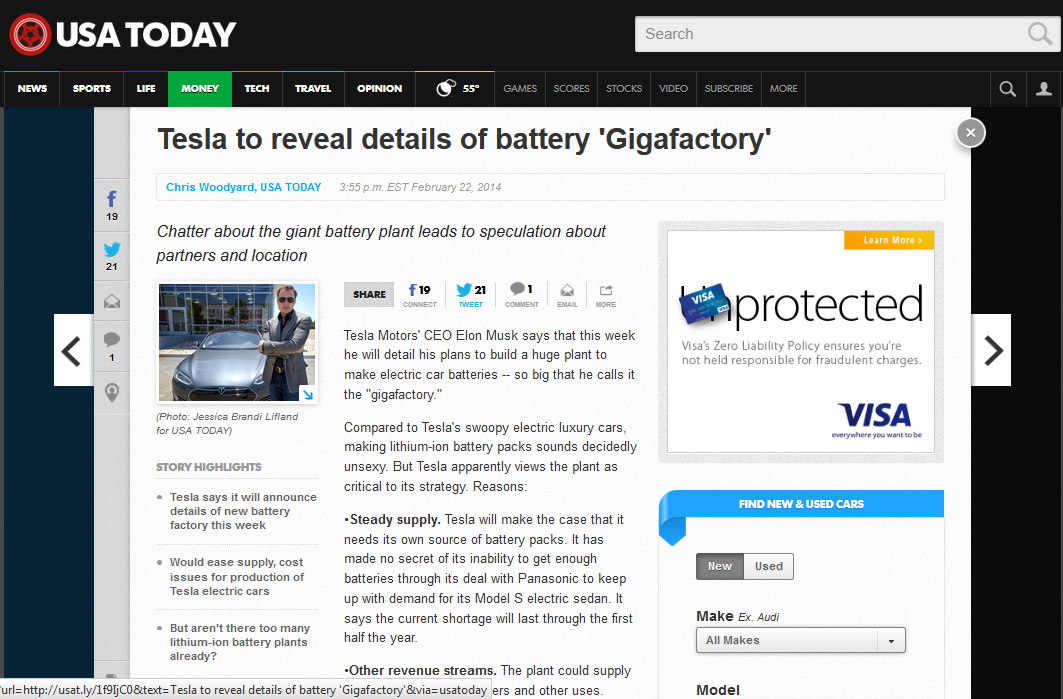 The Stargate Group, Australia’s leading application service provider (ASP) to the mortgage finance sector, has taken its first step toward applying software-defined networking (SDN) to its operations with the deployment of Brocade® NetIron® CER 2000 Ethernet/MPLS routers. Implemented by Brocade partner, Mycom, the new routers are the foundation of a network that handles all traffic to and from more than 2,000 mortgage brokers across the country, enabling Stargate to boost service resiliency, delivery capacity and overall network performance by 40 percent while reducing operational costs.

The network has played a vital role in helping the company overcome the limitations of the previous-generation routing platform, which could not support the capacity and performance requirements--or accommodate the Internet’s ever-growing Border Gateway Protocol routing table. As well as having more capacity to scale its services, Stargate also wanted to increase service resiliency to uphold its service level agreements and streamline the network to reduce operational costs.

The flagship Avaya IP Office 9.0 platform will further streamline the way midmarket companies collaborate and communicate. Businesses will now be empowered with simplified technology and greater collaboration in a highly flexible, single-platform environment that can support from 5 to up to 2,000 users.

According to the report, MOL was said to be seeking listing on the US Nasdaq market. 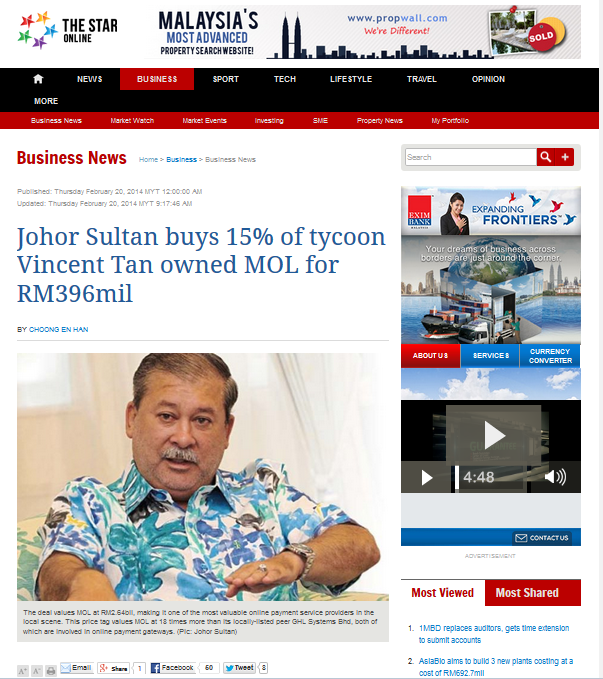 The latest survey conducted by Enlogic has revealed that data centres in Malaysia and Singapore are being over cooled. In fact a full 82% of respondents were running their data centres at temperatures below the recommended range. This raises energy costs needlessly and also drops the effective PUE of data centres.

As there is a big challenge for many companies and governments to facilitate the transition of their heritage IT setup from a network to an application centric architecture to ensure secure business operations and reduction of upfront costs, Agile Distribution was set up to address this trend in delivering F5’s ADN solutions to businesses across South East Asia.

Headquartered in Singapore, Agile Distribution aims to bring better value and provide more focused resources, support, and enablement services to both its channel partners and their customers.

“The social messaging market is growing rapidly, with messaging volumes to reach 69 trillion with subscribers growing to 1.8 billion by the end of 2014 according to Ovum forecasts. An immediate benefit to Facebook in the WhatsApp acquisition is that it has enabled two strong social messaging players to be on the same team. WhatsApp is a force to be reckoned with. It has over 450 million monthly active users worldwide and over 320 million daily active users. It claims to be adding one million new registered accounts per day.

WhatsApp is a player which is strong in both mature markets as well as emerging markets across Asia and the Middle East, which present a significant growth opportunity for Facebook. At the same time, Facebook is growing its mobile footprint with close to a billion monthly active mobile users. This makes innovation in mobile services and capabilities an imperative, either organically or by acquiring best in class applications like WhatsApp. With the acquisition Facebook has gained access to WhatsApp’s large repository of phone numbers, which was a missing link for Facebook’s user information. The access to phone numbers now bridges the offline and online worlds of Facebook users. WhatsApp will also enhance Facebook’s mobile strategy and make the service grow faster and be stickier with mobile first users.

Facebook will in turn provide WhatsApp with the funds and resources it needs to develop the service and become an even stronger competitor in an increasingly over crowded messaging market. WhatsApp has a small team and has only received a modest investment of US$8 million from Sequoia.

I hope WhatsApp will continue with its pursuit to charge user annual modest subscription of $0.99 so that the industry should have a working model and best practice for low costs yearly subscription software.

Oracle Planning and Budgeting Cloud Service opens up opportunities for organizations of all sizes to quickly adopt a world-class planning and budgeting solution with no CAPEX infrastructure investments, flexible deployment options and virtually no learning curve.

“Oracle Planning and Budgeting Cloud Service will provide tremendous value to our customers, by removing obstacles such as IT hardware and software requirements associated with implementing a world-class planning and budgeting application,” said Chris Boulanger, vice president, EPM Practice, Cervello.

Global optical networking (ON) spending fell in 4Q13 according global market analyst firm Ovum. Revenues of US$3.5bn were down 5 percent from 3Q13 and 10 percent from the year-ago quarter.

The latest market research report by Ovum* found that year-end spending increased in EMEA and South & Central America (SCA) however, were not enough to offset declines in North America and continued softness in China, which contributed to weak Asia-Pacific spending.

Ron Kline, Principal Analyst, Network Infrastructure at Ovum and author of the report said “Global ON spending for 2013 declined 1 percent to US$14.5bn, consistent with Ovum’s pessimistic forecast scenario, but improved conditions in 2014 should enable a 2 percent growth for this year.”

Market spending continues to fluctuate regionally out of phase by quarter, resulting in sluggish growth on a global level. Vendors with stronger exposure to EMEA and SCA did well this quarter according to global market research firm Ovum.

Cisco released a library of VNFs, along with two initial service modules within the services broker for ESP; a multi-screen Cloud DVR service to boost ARPUs and supported by virtualized Cisco Videoscape VNFs; and a mobile Internet service based on Cisco’s Quantum collection of mobile network services.

The introduction of ESP provides evidence of a number of industry-wide changes occurring in service provider networks. First it demonstrates that the SDN and NFV market is beginning to mature; with less focus on the technology details, and more on supporting service provider business needs.

Second, it shows how business models are changing with software-centric networks. Cisco is offering ESP VNFs standalone or integrated with Cisco service orchestration. ESP can also be purchased fully integrated into a service provider’s network, or as a cloud-based service.

Finally, ESP presents clear evidence that Cisco is moving to virtualize its entire network services portfolio. Critics will say ESP is another proprietary solution from Cisco, but Ovum sees value in simplifying deployment with an integrated solution. Over the next 2-5 years, service providers will have to weigh how they can best apply network elasticity, scalability, and automation to solve their growing operational issues: by deploying integrated and supported solutions or by becoming system integrators to support multi-vendor solutions. We believe they will push as much systems integration onto their vendors as they can; Cisco’s ESP and last week’s Ericsson-Ciena development and distribution agreement are two distinct approaches to providing this integration.”

Capillary Technologies, the leading provider of Intelligent CRM solutions that enable retailers to intelligently engage with shoppers across social media, mobile, online and in-store channels, today announced that American Express Ventures has joined Sequoia Capital, Norwest Venture Partners and Qualcomm Ventures as investors in the company. The additional capital will help fuel Capillary’s continued growth as it expands in major markets around the world.

On Jan 29, 2014, Google's Larry Page made announcement through the official blog that they are selling Motorola Mobility to Levono. 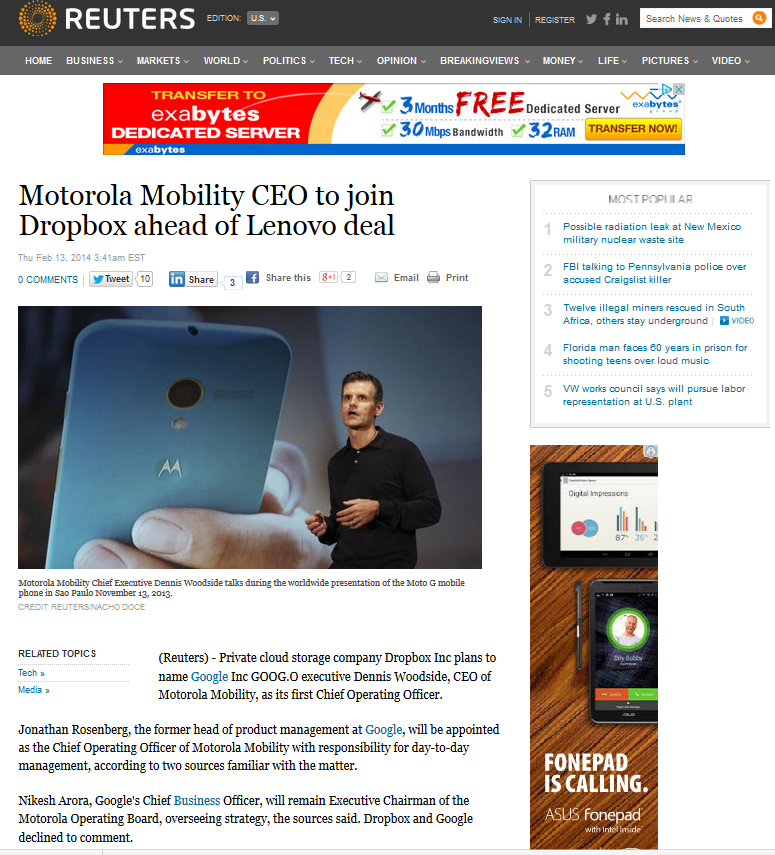 The much anticipated media launch of The Entrepreneurs‟ Conference TEC2020 by the Malaysian Indian Entrepreneurs Cooperative (KUIMB) took place today at the Istana Hotel, Kuala Lumpur.

The media launch was organised with the aim of highlighting the much awaited TEC2020 Conference which will be held at Istana Hotel on the 11th April 2014 and is dubbed: „The Power of Ideas‟.

The TEC2020 Conference sets out to harness talent from established entrepreneurs as well as budding ones. The event serves as a platform to bring about revolutionary change in the marketplace where new ideas are applauded and market gap is sought to be filled.

The Fibre Channel Industry Association (FCIA) has announced that networking equipment supporting both 128Gbps and 32Gbps should become generally available in 2016 which will enable storage teams to double the performance of their Fibre Channel infrastructure, and Brocade simultaneously announced (U.S. time) that it will ship both speeds of Gen 6 in 2016. Faster storage area networks (SANs) will help enterprises keep up with growing performance pressure from servers and storage arrays. Server virtualization keeps computing infrastructure constantly busy and demanding data, while solid-state disks (SSDs) are able to deliver that data more quickly.