on March 03, 2014
Refer to Computer Security Updates Week 3 of Feb 2014; the biggest news was the DDoS attack towards CloudFlare.

Kaspersky Lab ranks first in a TOP3 metric based on solutions that performed consistently well in independent testing throughout 2013, according to statistics gathered from the most authoritative test organizations. Kaspersky Lab’s solutions were awarded first place in 41 out of 79 tests and in a further 20 tests they came second or third. The company’s number of top-three finishes far exceeded that of its competitors.

In addition, a library of more than 1,000 OpenAppID detectors will be available at no charge through the Snort community at http://www.snort.org. Any community member may contribute additional detectors, including end user organizations with custom applications that are not commercially available.

Reuters reported that a British man was charged with hacking into servers of various U.S goverment agencies, including those of Military.

According to the report, 'sequel injection' method was used for the hacking and the man posted stolen information to a website he controlled. 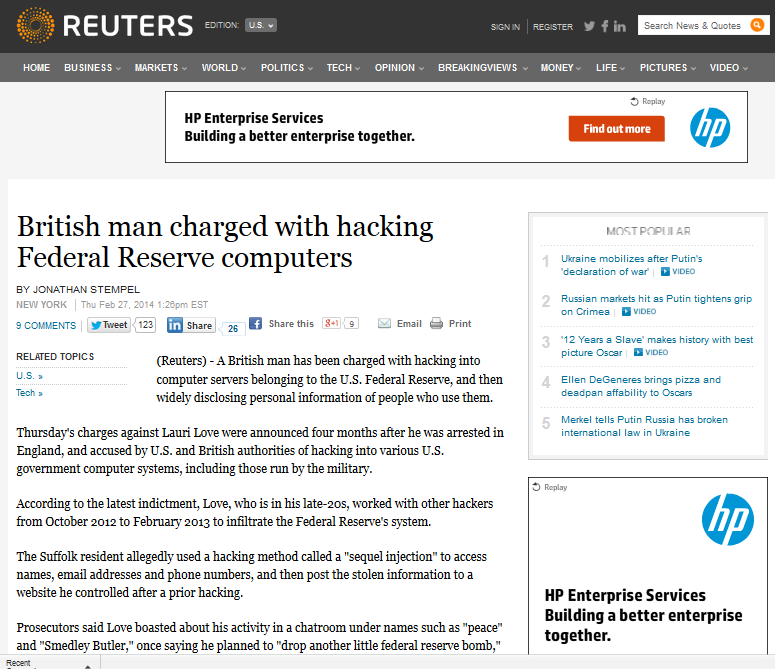 Barracuda Networks, Inc.today announced the integration of work flow automation, eSignature and more to its secure cloud service Copy for business to enable organisations to simplify the way they collaborate and work, from anywhere or with any device.

Recognising the need for easier migration process, last year Barracuda partnered with Mover; the online data migration expert that allows users to easily and cost effectively migrate from other cloud storage providers such as Dropbox, Box and SugarSync. Mover’s hosted platform offers swift, simple and secure solutions for data migration and backups, with no downloads or installations.

Every new Individual Copy user account will receive 15GB of cloud storage free of charge. Paid Copy Pro plans start at $9.99 USD/month or $99 USD/year for up to 250GBs.

Companies can purchase Copy in 10-user packs of $79.99 USD/month or $899 USD/year for as much storage as they need. For additional pricing information, please visit https://www.copy.com/price/.

The experts at Kaspersky Lab have published the results of their analysis of the mobile threat landscape in 2013.

Cisco today announced that it has added its Advanced Malware Protection (AMP), originally developed by Sourcefire, into its Content Security Portfolio of products, including Web and Email Security Appliances and Cloud Web Security Service. The integration provides customers worldwide with comprehensive malware-defeating capabilities, including detection and blocking, continuous analysis and retrospective remediation of advanced threats.

Part of the McAfee Security Connected approach, the CTP solution tightly binds and shares threat intelligence and workflows across endpoints, network, and the cloud.

It also provides protection, performance, and operational savings that are not possible from point products, which aren’t designed to optimize security and risk management as an IT function and carry the overhead of manual integrations.

In a recent research note by IDC, 24 percent of SMB organizations currently utilize an MDM solution to govern and manage their mobile devices.

The study identified Sophos Mobile Control as the most deployed MDM product among all survey respondents at 25 percent.

The threat report shows that the mobile revolution is clearly in effect, and as a result, mobile malware is on the rise.

The report also shows that in some countries – Russia, Austria and Sweden – mobile malware has overtaken desktop malware. India, Spain and China all have high mobile threat exposure levels.

With always-connected devices and users’ tendency to share and store information as revealed in the recently released 2014 Love, Relationships & Technology survey, protecting our devices and data becomes even more necessary.

For the increased security of consumers, McAfee today announces a full-featured version of its award-winning McAfee Mobile Security is now available to Android users at no cost in 30 languages. This is shortly after McAfee also launched McAfee Internet Security for iOS devices.

With Mobile World Congress happening right now, smartphone and tablet innovations are set to become a reality over the next 12 months.

However, as mobile manufacturers and app developers have upped their game each year, so too have malware authors. Symantec discovered an average of 272 new malware variants and five new malware families per month targeting the Android mobile operating system in 2013. These threats have taken aim at mobile devices in several ways, such as by attempting to steal personal and financial information, track users, send premium rate SMS messages, and display intrusive adware.

Attackers have caught onto the trend of two factor authentication (2FA) and have developed Android malware to steal these 2FA codes. Threats such as Android.Hesperbot and Android.Perkel intercept SMS messages with 2FA codes and send them directly to attackers. They can also either steal other banking credentials or work with other computer-based threats to compromise victims’ accounts.

CyberArk today unveiled the latest version of Discovery & Audit (DNA), the first tool on the market to identify and map exposed privileged password hashes and all related vulnerable machines on a network.

CyberArk DNA™ is a patent-pending, light-weight, stand alone tool that exposes the magnitude of privileged account security risks by enabling organisations to easily identify and analyse all privileged accounts across their network. CyberArk DNA v4 free trial licenses are currently available to all businesses for a limited time.

CyberArk DNA v4 is available today. For a free trial of CyberArk DNA or for more information, please visit http://www.cyberark.com/discover-where-your-privileged-accounts.

Instead of mere point-to-point integration, McAfee’s TIE allows for a bi-directional, real-time exchange of threat information between any device — spanning endpoint, network, gateway and SIEM (Security Information Event Management). McAfee’s TIE not only provides detection, but automated action in order to prevent threats on a deeper level.

With McAfee’s TIE, it will be possible for security components to dynamically join the real-time data exchange layer to operate as one in assessing, detecting, and surveilling security state enabling instant action, better protecting organizations.