on March 18, 2014
Refer to Computer Security Updates Week 1 of Mar 2014; the biggest news was regarding Cisco enhanced product portfolios with advanced malware protection.

A phishing email claimed to be originated from Hong Leong Connect Team, requesting to visit a new website with a new design and features

The hyperlink points to fraud URL: http://earnmoneyz.com/old/hlon.php - please do not click on it.

HP today announced the launch of the first near-field communications (NFC) touch-to-authenticate solution for enterprise customers, enabling end users to easily authenticate themselves with the simple touch of their NFC-enabled Android smartphone or tablet to an HP Enterprise LaserJet printer or MFP.

The solution consists of HP Access Control 14.0 and Updates to HP ePrint Enterprise 3.2.

Reuters reported that several NATO websites was downed by hackers, believed to be a retaliation towards the looming tension of Crimea.

The attack came in the form of DDos and affected the e-mail network as well.

A Ukrainian group known as 'cyber berkut' claimed responsibility for the attack. Sent through emails, the scam uses a simple subject of "Documents" and urges the recipient to view an important document on Google Docs by clicking on the included link.

The fake page is actually hosted on Google's servers and is served over SSL, making the page even more convincing. The scammers have simply created a folder inside a Google Drive account, marked it as public, uploaded a file which loads a fake 'Google Accounts' login page.

After pressing "Sign in", the user’s credentials are sent to a PHP script on a compromised web server.

This page then redirects to a real Google Docs document, making the whole attack very convincing. Google accounts are a valuable target for phishers, as they can be used to access many services including Gmail and Google Play, which can be used to purchase Android applications and content.

WatchGuard Technologies has unveiled the FireboxT10, an enterprise-level UTM security platform designed for home and small office environments. It is a timely solution given that many enterprise networks extend to homes given that 70 percent of high-value employees working at home at least once a week.


According to a recent global WatchGuard survey of IT professionals[ii], more than 82 percent allow employees to access the corporate network from a small office or home office location. However, nearly 30 percent do not require a gateway security device. For those that do, only 23 percent require users to use security products similar to those used in the corporate headquarters, with features such as Intrusion Prevention, AntiVirus, Data Loss Prevention, Application Control, AntiSPAM, and more.

Kaspersky Lab has announced that its latest Maintenance Pack (MP1) for Kaspersky Security for Linux Mail Server is now publicly available for installation. This new suite of enhancements includes significant improvements to the management capabilities and overall security effectiveness of the solution, which has already demonstrated outstanding test results in independent testing.

The newly-enhanced Kaspersky Security for Linux Mail Server will now feature full integration with the Kaspersky Security Network, which uses the cloud to deliver real-time threat intelligence from millions of our users around the world to our company’s experts, ensuring our customers are protected from the latest emerging threats.

TheStar reported that top leaders from opposition party PKR, claimed their mobile phones have been hacked.

The hacking resulted in unsolicited text messages which were damaging to the reputation of their own party and allies were sent out from their one phones. 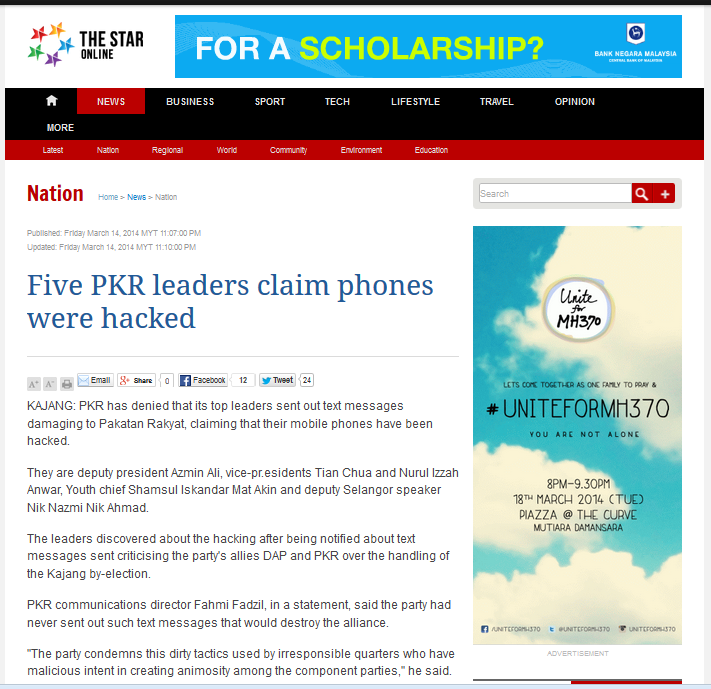 Ovum attended the RSA conference in late February 2014 and the show continues to grow in importance and increased participation by most in the ICT community. Ovum expects this conference to continue to grow for the next few years with security and managing risk one of the top agenda items for the IT decision makers. It was more than just the Target and NSA incidents that is driving this growth.

In many of the meetings, briefings and announcements around RSA, Cybersecurity initiatives and work efforts are underway. Not all vendors were in the same state but most of them were increasing, enhancing or adding Cybersecurity measures to their security service portfolios. Clearly, this is also part of the move and growth to more proactive (versus reactive) security protection

Every vendor mentioned the fact that all large enterprise customers have had a breech. Now it was more about knowing about the total exposure, assessing your risk and plugging the holes in your security program to manage your risk as well as remediate and resolve security incidents in real time.

In 2012, Blue Coat led the Asia Pacific market in Web Security market share. Country Manager, Ivan Wen says that the company have opportunity to increase the local market share by helping businesses securely embrace new technology trends such as mobility and applications– all possible via the ‘Business Assurance Technology’ offering.


The Blue Coat ‘Business Assurance Technology’ blueprint addresses this via five (5) core centres of excellence that cover a comprehensive array of technologies, products, services, and capabilities that give businesses a total protection.
Established since 2005, Blue Coat’s business model in Malaysia is 100% sales and distribution via channel partners.

“Today’s vote of the European Parliament on the draft Data Protection Regulation signals the clear intention to press ahead with the reform, despite all the delays and disagreements that had slowed down the process The Parliament has amended the draft to strengthen users’ protection in transfer of data outside the EU, which will have to be authorized by a national data protection authority and requires firms to inform the concerned person beforehand. This is now clearly becoming more of a sensitive issue, which is capturing the interest of citizens and firms concerned about the safety of their personal information, and may turn into a vote winner in the upcoming Parliamentary elections. It is therefore unsurprising that the EU Parliament has pressed ahead to tighten the grip on data transfer, even though the Regulation will not be finalized before the end of 2014.

“The Parliament has also shown to be aware of the importance of a robust set of fines, which will now be significantly higher than the EC’s initial proposal. They can now go up to €100 million, or 5% of a company’s annual worldwide turnover (whichever is greater) instead of €1 million, or 2% of the turnover initially proposed. Having significantly deterrent fines will be a key factor for the success of the new rules, since many firms whose business is across different geographies will often have to decide which rules they have to respect (e.g. whether to satisfy a request for data coming from the US, or refusing it to comply with EU regulation). However, it will be important to ensure that the fines are not disproportionate for small businesses, such as the flourishing tech start-ups on which European policymakers are relying to boost the EU’s economy. A phased introduction, or a more detailed differentiation in the set of fines, will be necessary in this respect.”

Reuters reported that the NSA has been hijacking botnets from criminals for own benefits.

This revealed by Edward Snowden. 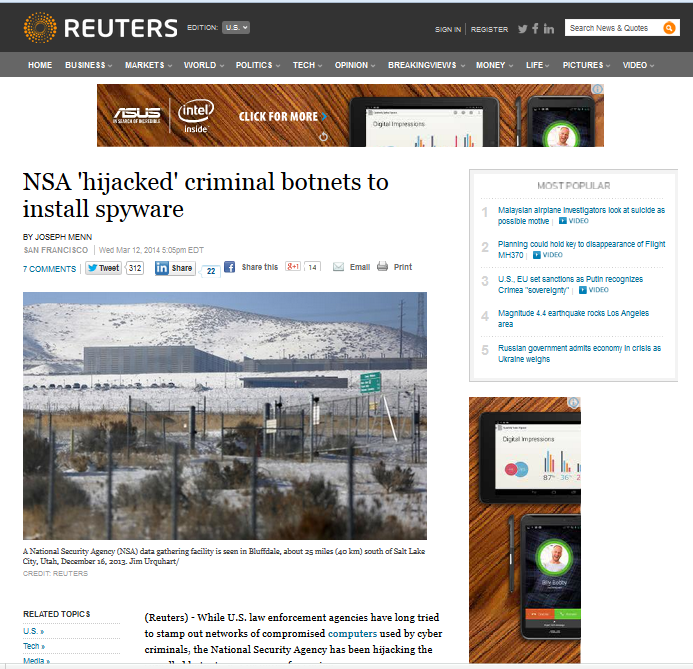 Today, McAfee Labs released the McAfee Labs Threats Report: Fourth Quarter 2013, highlighting the role of the “dark web” malware industry as a key enabler of high-profile point-of-sale (POS) attacks and data breaches in the fall of 2013.

The main findings of the report include the growing ease of purchasing POS malware online, and selling stolen credit card numbers and other personal consumer data. McAfee Labs believes this accelerating trend could pose a significant threat to the long-established certificate authority (CA) model for authenticating “safe” software.

Some additional Q4 2013 findings include:

'The Onion Router' or TOR which enables tracing real location of servers almost impossible by relaying messages across a virtual network consists of TOR software installed on supporting servers.

Under this award, HP will provide licenses for two industry-leading enterprise security solutions that will be used to address the application security requirements with the CDM program: HP WebInspect and HP Fortify Static Code Analyzer.