on April 19, 2014
In the last updates series (Week 4 of Feb 2014), the most interesting update was the offering of paid apps on Google play for Malaysian developers.

For this updates series, the followings had emerged.

Themed ‘Malaysia to me is...’ in conjunction with Visit Malaysia Year 2014, the competition aims to stimulate and nurture young students’ natural ability to dream big and help inspire creativity. It is open to all Malaysian primary and secondary school students within the following four age categories: 7 - 9, 10 - 12, 13 - 15 and 16 - 17. 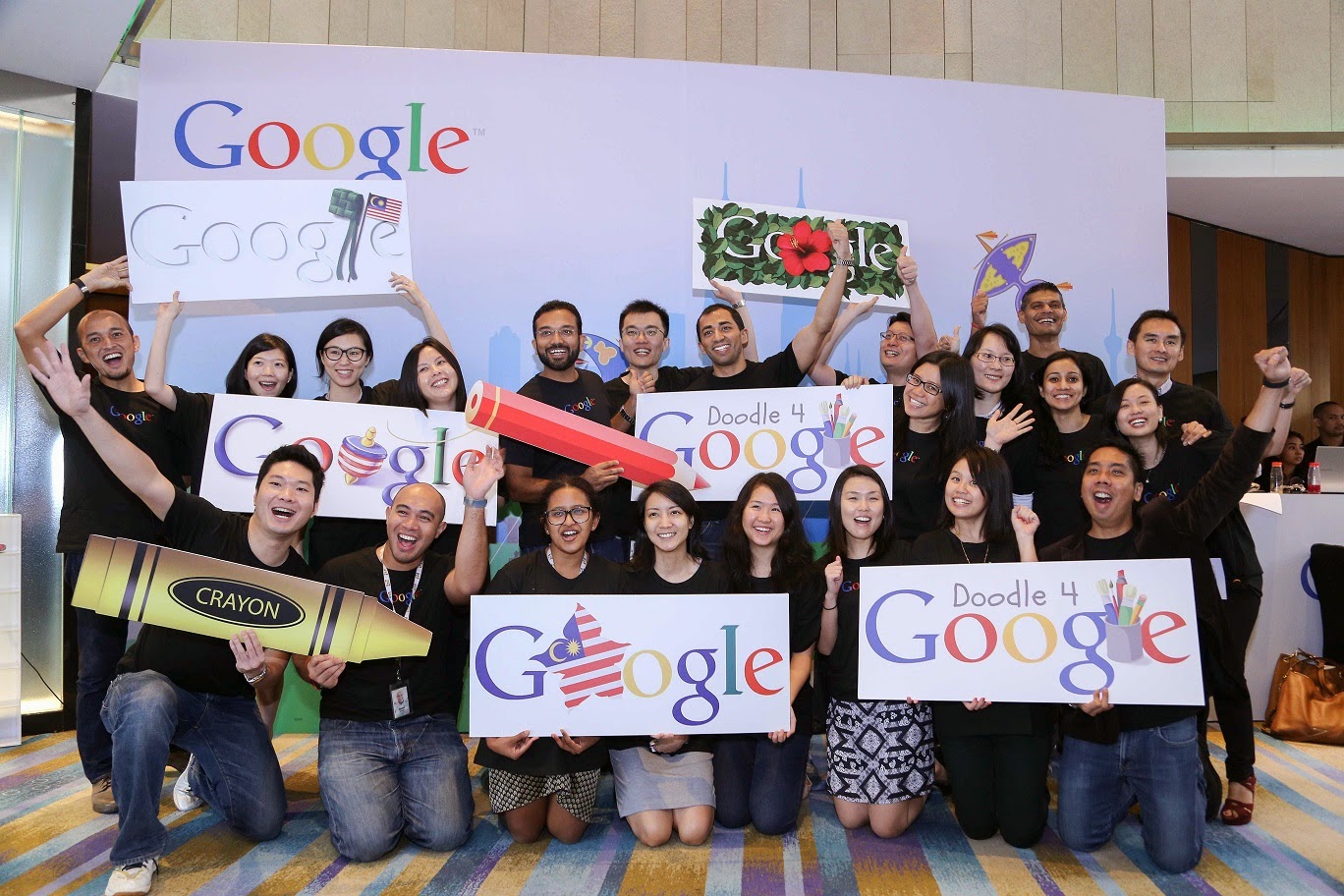 Mobile app developers can now leverage on the vserv.mobi advertising platform (for advertisers and publishers) to better optimize engagement with consumers - for instance, when an e-commerce mobile app enables deep linking, users can launch the e-commerce app directly from the advertisement the link.

The deep linking feature is offered alongside the new ads format: Search Intent Ads - the ads are presented as a full screen mobile page with search capability and category short cuts.

Microsoft Malaysia, in collaboration with Malaysian Communications and Multimedia Commission (MCMC), Telekom Malaysia (TM) and Multimedia Development Corporation (MDeC), is proud to announce the winning student teams of the Malaysian Imagine Cup 2014 National Finals. Held from 10-12 April 2014 at the Telekom Malaysia Convention Centre, Menara TM, 15 teams which qualified from the first round competed in three core categories of the Imagine Cup: Games, Innovation and World Citizenship, for the honor of representing the nation on route to the Imagine Cup 2014 World Finals to be held in Seattle, USA.

For the first time in the National Finals, there was a tie in the World Citizenship category. Another assessment will be made at a later date to determine the winner. The judges have made a decision to assess teams "A-Ware" from UTAR and "CHAP" from Swinburne on another date again.

Inspired by Code.org’s successful ‘Hour of Code’ campaign – which was spearheaded by Bill Gates, Mark Zuckerberg, Barack Obama, Ashton Kutcher, Shakira – Microsoft on Thursday announced that it is bringing the Asia Pacific Week of Code (http://aka.ms/wespeakcode) to Malaysia and other parts of Asia from April 21 to 27. Dubbed Code for Malaysia locally, the campaign, which commences from 19 April till 27 April, will see local celebrities such as actress Sazlini Shamsul Falak, national youth icon Michael Teoh and beauty pageant title holder Deborah Henry collaborate with Microsoft and three higher learning institutions nationwide to introduce this week-long coding campaign to students of all ages - ranging from primary to University students.

Code.org’s ‘Hour of Code’ aims to introduce computer programming to 10 million students and encourage them to learn programming. It is a one-hour basic introduction to Computer Science, designed to demystify "code" and prove that anyone can learn the fundamentals of computer programming. The Asia Pacific Week of Code extends the ‘Hour of Code’ by dedicating an entire week designated across the Asia Pacific region to encourage people, particularly young people, to hold basic coding training or hold a hack-a-thon in schools, community centers, universities – basically anywhere.

The campaign, with the catch phrase “We Speak Code”, aims to give millions of people from all over the region a taste of what coding is, demonstrate how accessible learning coding can be, and create interest in expanded programming and computer science courses and activities in schools.

The Malaysian Indian Entrepreneurs Corporative (KUIMB) organized The Entrepreneurs' Conference TEC2020 that was held last Friday, 11 April 2014 at the Istana Hotel. During the Conference, there was an exchange of MoU between KUIMB and the New Affirmative Action Movement (NAAM). This MoU serves to offer services such as training among others to benefit entrepreneurs in Malaysia and take them steps closer to achieving their goals and dreams.

KUIMB is an organisation established by like-minded individuals with the objective of uplifting the socio-economic status of its members, it also has expertise in providing training and guidance. The objectives set by KUIMB include but are not limited to, creating business opportunities for members and developing sufficient capital to venture in to business.

NAAM on the other hand, aims to economically empower Indians and increase Indian competitiveness by developing and creating a digital community and assisting with employment, employability and assimilation of Indians effectively into the mainstream community. It also promotes economic and business understanding among Indians.

TheStar reported that homegrown Internet taxi booking service MyTeksi looks set to gain more fundings from investors and has a potential of going for listing.

Wednesday at Build 2014, Microsoft Corp.’s developer conference, the company announced several advances to Windows including Windows Phone 8.1, the availability of Windows 8.1 Update, a converged developer platform, and a $0 royalty licensing program for OEM and ODM partners developing smartphones and tablets with screens under nine inches.

Also as a part of the conference, Nokia announced three new Lumia smartphones for Windows Phone 8.1, including the flagship Lumia 930, the affordable Lumia 635 and the first dual-SIM Lumia 630.

Oracle NoSQL Database 3.0 is the latest version of Oracle’s distributed key-value database, designed to simplify the development of next generation applications, while enabling greater security and availability for real-time, web-scale, workloads.

By optimizing the latest version of the Broad's Genome Analysis Toolkit (GATK) 3.1 for Intel® Advanced Vector Extensions (Intel® AVX) in Intel® Xeon®-powered servers, Intel and the Broad were able to achieve three to five times overall improvement in variant discovery to meet the challenges of research and accelerate discovery.

GATK 3.1 is available for academic, noncommercial use through the Broad Institute's web site at www.broadinstitute.org/gatk/. Commercial and for-profit users can license GATK 3.1 through Appistry at www.appistry.com/gatk.

There are 9 million Java developers worldwide and more than 3 billion devices are powered by Java technology today. Over 10 billion Java Cards have been shipped since its introduction.

HP today announced new offerings to accelerate mobile and cloud-based testing and improve user experience while increasing cost savings and quality for the delivery of business-critical applications and services.

HP is unveiling new versions of the products within its HP Application Lifecycle Management portfolio.

Channel 9 reported that Leslie Lamport of Microsoft Research is rewarded for his outstanding contributions to computer science with the 2013 ACM A.M. Turing Award. Lamport is well known to computer scientists around the world for his foundational work in distributed computing, including the creation of the Paxos algorithm for implementing fault-tolerant distributed systems.

His 1978 paper Time, Clocks, and the Ordering of Events in a Distributed System is one of the most cited in the history of computer science. Lamport's immense contributions have resulted in improved correctness, performance, and reliability of computer systems used around the world today. 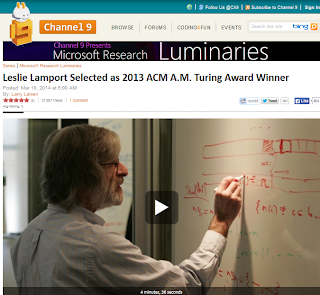 Besides that, you can reap huge benefits by figuring out how .NET APIs are coded - i.e check out how bitarray.clone works; it simply performs Array.Copy.