In his welcome address at the event, Mr. William Xu, Huawei’s Chief Strategy Marketing Officer, said that as connectivity becomes increasingly important and a way of life globally, ICT technologies, represented by mobile broadband, cloud computing, big data analytics, the Internet of things, and social networking, will continue to reshape the world and introduce a new wave of technological development. Mr. Xu also underscored Huawei’s commitment to continue working closely with partners from business, industry and academia to promote greater convenience and freedom in communications and the sharing of ideas to drive the evolution of technology, industries and interpersonal interaction. Ultimately, Huawei aims to help to build a better connected world.

Telegraph reported that Apple is to return cash of $130bn to shareholders.

The sum consists of a buy back of own shares amounting to a total of $90bn and increased dividend. 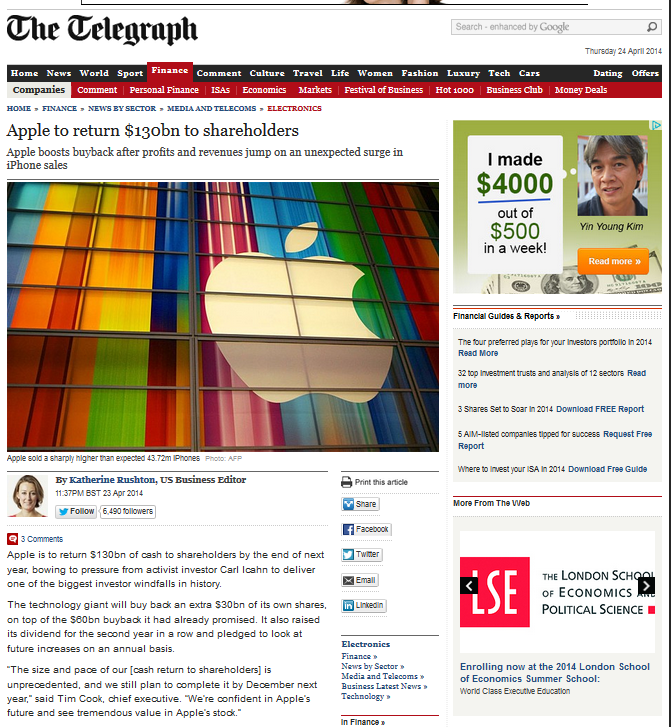 ProphetStor Data Services, Inc., a leader in Software-Defined Storage (SDS), today announced further expansion into Asia with an office opening in Shanghai, along with the appointment of Robert Ye as General Manager of China.

The new establishment will provide pre-sales and post-sales support, customer service and technical assistance to ProphetStor's growing base of customers in China.

BuzzCity, the leading global mobile advertising network, would like to share its latest quarterly report on the mobile internet which includes a spotlight on mobile banking adoption and reveals mobile users’ attitudes towards mobile banking. The rise in mobile banking is being driven by better security and flexibility around mobile payments, as well as increased investment from tech companies. Interestingly, both developed and emerging markets are adopting mobile banking methods; perhaps not surprising as the rise in mobile has been exponential, but what is surprising is the fact that those surveyed simply do not feel that they “need” mobile banking as yet. The UnderBanked now make up 12% of mobile users.

The signing ceremony also saw EMC and APU come together to talk about the development and introduction to several new modules in the current curriculum for courses in IT, intelligent systems, internet technology, and enterprise computing. This collaboration is a part of EMC’s global academic alliance program, EAA, which aims to prepare students for successful careers in the IT industry.

As a regional hub for EAA in Kuala Lumpur, APU will be the centre for EMC’s faculty training programs, seminars and workshops. APU will also help popularize EMC Academic Alliance amongst institutions in Kuala Lumpur so that EMC could enroll more EAA partners.

The company has simultaneously released a new mobile app for BlackBerry 10, bringing Viber to BlackBerry’s latest OS with many of the most popular Viber features for the first time.

Violin Memory, a leading provider of all-flash storage arrays and appliances delivering application solutions for the enterprise, has announced the general availability of the Windows Flash Array (WFA).

WFA enables enterprise and cloud workloads, such as SQL Server, Microsoft SharePoint, and Windows Server with Hyper-V virtualized applications, to meet the needs of global enterprises, while satisfying IT operational demands for maximized agility, automation, and orchestration between network, storage and compute resources.

It is a tightly integrated combination of Windows Storage Server 2012 R2 and Violin’s award winning hardware and software into a single solution that delivers high performance all-flash array storage for enterprise and cloud customers.

Cloud-based unified communications and social collaboration platform Unified Inbox officially sets up its international headquarters in Singapore, as a strategic move to grow the company globally and expand into the Asia region.

Currently in the closed beta phase, the company has also secured top tier telco companies, ISP and media as partners for a global market roll out in 2015, as it sees the huge potential of this Communication-as-a-Service platform that gives users control of their communications flow across email, Twitter, LinkedIn or SMS.

Their first offering is a Unified Inbox mobile app which allows users to manage all their incoming and outgoing messages centrally from within one interface.

The offering is dubbed as Communication-as-a-Service platform.

Brocade today announced the appointment of Gabriel Breeman to the newly created position of OEM director for Asia Pacific (APAC). He will drive OEM strategies, strategic partnerships and alliance initiatives for the region to help position Brocade as the data centre networking partner of choice in the OEM partner business segment. Breeman will be based in Singapore and report directly to Brocade vice president for Asia Pacific (APAC), Adam Judd. Brocade’s worldwide OEM partners include EMC, Dell, Fujitsu, HP, Hitachi Data Systems, IBM and NetApp.

In recent times, mobile searches have been effective in helping consumers make crucial purchase decisions swiftly with studies showing that 75% of mobile searches lead to follow-up actions such as purchases and word-of-mouth sharing. Realising this untapped potential in the E-commerce industry, Vserv.mobi, an award winning mobile advertising exchange, today announced the launch of Search Intent Ads, a new advertising format that integrates the power of search into mobile ads.

Search Intent Ads is powered by the deep linking technology - to enable this, advertisers need to customize their contents (such as mobile e-commerce app), by leveraging on the SDK provided by Vserv.mob.

SAS, the leader in business analytics software and services, has announced the appointment of Tan Yen Yen as regional vice president and managing director for SAS South Asia Pacific, based in Singapore.

In announcing this appointment, Mikael Hagstrom, executive vice president, SAS EMEA and Asia Pacific said, “With nearly three decades of experience in the IT industry, Yen Yen will bring with her an immense amount of experience and success to this role. She will lead SAS’s effort to claim market leadership for Analytics in the region. SAS South Asia has accomplished continual record revenue growth and this appointment will further consolidate our position.”


Yen Yen’s most recent role was with Oracle as senior vice president, Applications, Asia Pacific. Prior to that, she was vice president and managing director at Hewlett Packard, Singapore.

She holds a Bachelor of Science from National University of Singapore and an Executive Master of Business Administration from Helsinki School of Economics Executive Education.

In 2011, Yen Yen was named “IT Leader of the Year” by Singapore Computer Society for outstanding contributions to the IT industry in Singapore.

Fusion-io today announced the Fusion ioMemory platform has been optimized for performance with SQL Server 2014. The Fusion ioMemory platform builds upon the in-memory innovation in SQL Server 2014, delivering up to 4x improvements in transactions per second and a significant reduction in data latencies in our testing. The transactional performance from Fusion-io flash memory products drives real-time insights for faster business decisions.


This win was received by the data centre at the annual Frost & Sullivan Malaysia Excellence Awards that was held on 15th April 2014 at the Traders Hotel, Puteri Harbour, Nusajaya, Johor.

Chiew Kok Hin, the CEO of the AIMS Group says, “It’s an honour for AIMS to once again receive the Data Centre Provider of the Year Award for 2014 from Frost and Sullivan. It’s been a remarkable year for AIMS as we continued to achieve double digit growth with a 16 percent increase in revenue in 2013. This award is a feather in the cap to our efforts to be the top data centre in the country.”

Oracle has just newly launched mobile functionalities on the Apple App Store and the Google Play Store for download for Enterprise Performance Management.

The solution is aimed to help organisations access enterprise performance insights and make informed decisions from any location via mobile devices.

Muslim Pro, a mobile app created by Singapore-based apps factory Bitsmedia – as they today announced that it has hit over 10 million downloads across 216 countries worldwide since its launch less than four years ago!

They have an average of almost 3 million active users monthly – showing a engagement rate of nearly 30% of the people who have downloaded the app.


Said Erwan Mace, CEO of Bitsmedia, said “Once smart phones have become a necessity in emerging markets like they are now for other parts of the world, we can expect Muslim Pro’s user base to increase by up to 3 times.”

Muslim Pro is available online at www.muslimpro.com, and as a mobile application for iOS, Android and BlackBerry on the Apple App Store, Google Play and BlackBerry World respectively.

Tata Communications further expands its global data centre footprint by entering strategic partnerships with Pacific Link Telecom (PLT) in Malaysia, NEXTDC in Australia, as well as Interxion in Germany and Austria. These partnerships will enable Tata Communications to extend its current data centre offerings in these regions and to deliver a uniform customer experience across geographies. Tata Communications has one million square feet of colocation space across the globe and these new state-of-the-art partner sites in Malaysia, Australia, Austria and Germany will act as extensions to further expand its global data centre footprint.