Social communication and collaboration platform Unified Inbox today announced that it has entered into an agreement to acquire Smak (previously available at mysmak.com) for an undisclosed sum.

Smak (Secure Messaging Alerting and Knowledge) is a cloud solution to help executives and professionals sort their incoming information from email accounts and social media and increase their productivity by applying so-called LifeModes®. It was started in the US by Matt Hooper and Doug Fleming with the vision to provide those who wanted to cut through email and social media clutter with an option to actually do so.

The acquisition comes a few weeks after Unified Inbox, currently in its closed-beta phase, announced its expansion in the Asian region and officially set up its international headquarters in Singapore with further operations in Germany, India, New Zealand and the US in time for a global market roll out in 2015.

PR - May 8, 2014 - Microsoft Delivers Data Platform For The Era Of Ambient Intelligence

In the age of Big Data and the Cloud, business organizations stand to lose momentum if they do not keep up with the megatrends that continue to shape the industries they are invested in.


Nations, businesses and communities are living in a ‘mobile-first, cloud-first’ world surrounded by technology that are increasingly connected. In this new world of ubiquitous computing, Data is the fuel for intelligent systems and services to improve how we work, live and play. Data, is the new currency in business.

But how can organizations turn data into insights that matter for their business? An IDC research discovered that organizations that take a comprehensive approach to data have the opportunity to generate US$1.6 trillion in top-line revenue over the next four years. In Asia Pacific, that opportunity is worth US$278 billion – that’s a whopping additional 60% return on their data assets. This is called the “Data Dividend”.

Tata Communications and Orange International Carriers today announced an agreement to interconnect their respective IPX (IP-Exchange) communities for voice over IPX and Signalling Sigtran which allows IP networks to inter-work with the public switched telephone network. By tapping into both Tata Communications’ and Orange’s worldwide networks, mobile operators deploying innovative broadband services such as HD voice will have access to unprecedented global reach. The peering agreement enables faster connections and the best quality for voice over IP by enabling direct connectivity.

As of today, there are more than 1,300 partners around the globe have achieved Oracle PartnerNetwork Specialized status for Oracle SOA Suite.

USA Today reported that U.S federal jury ruled Samsung infringed Apple on two patents, notwithstanding that Samsung phones did not infringed the other two as claimed - it was just the software features.

On the other hand, the jury found Apple infringed one of Samsung's patents.

As a result of these, Apple was awarded nearly $1 billion while Samsung awarded a meek $158,400. 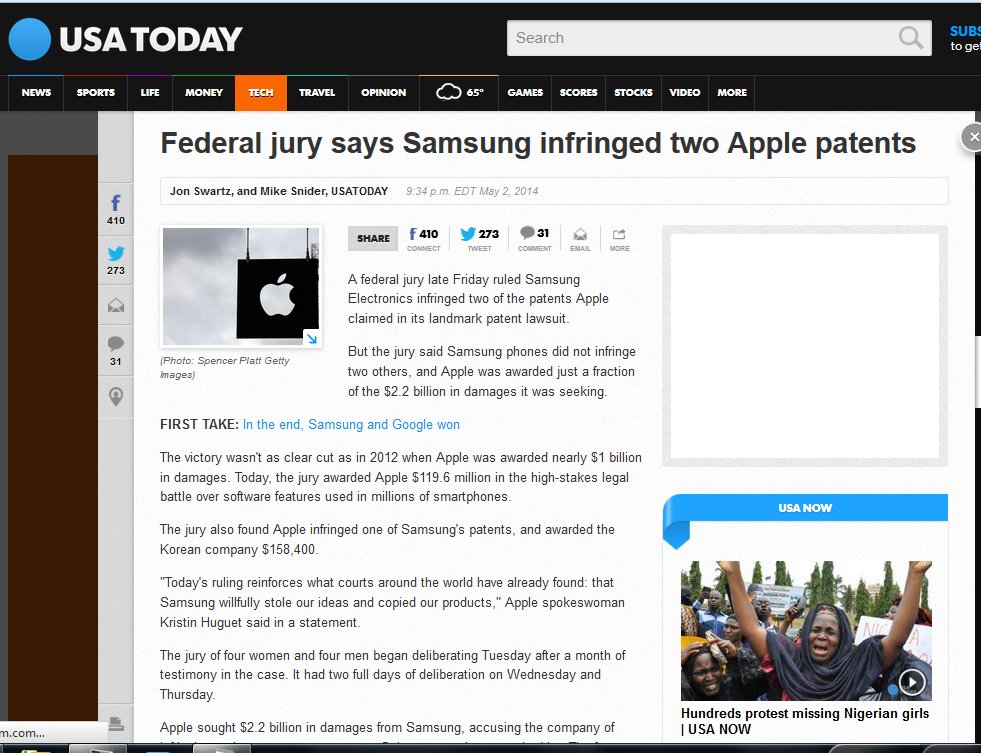 PR - May 2, 2014 - Cooliris launches on Android in Asia to become your photo universe

After the success of Cooliris on iOS with over 4 billion photos connected, Android users will also now be able to personalize their media hub in Cooliris by aggregating all their photos scattered across various social networks and cloud services into one app, making it a one stop app for all their photos. Users can browse their photos on our award winning 3D wall and selectively share photos with the default Android sharing panel

Oracle Solaris 11.2 is a complete platform that can help organisations accelerate their businesses and capitalize on the potential of cloud computing while reducing cost. It allows IT organizations to now deliver services from “zero to cloud” in minutes rather than weeks, with enterprise-grade reliability, security, and performance.


As of today, there are thousands of customers worldwide are running Oracle Solaris 11 on Oracle servers and Engineered Systems.

Chew Choo Soon, Chief Executive Officer and Executive Chairman of MyKRIS Limited says, “This is a significant win for us as it signals our first step into a new business sector as Courts is a household name for furniture, consumer electrical and IT products throughout Singapore and Malaysia.