on May 19, 2014
News for Week 2 of May 2014; the biggest news was the news of U.S Federal jury says Samsung infringed Apple on two patents by USA Today.

The Lumia 630 Dual Sim with Windows Phone 8.1 will be available in Malaysia. The first Dual Sim Lumia smartphhone delivers an unrivalled affordable smartphone experience, with quad-core processing and a ClearBlack 4.5” LCD screen at only RM549 (RRP).

According to Forrester Research Forecast, spending on cloud computing services is expected to grow to RM509bil globally by 2020. Cloud computing investments in Malaysia are expected to head towards an upward trend, too, reaching RM2.8bil by 2020 - a sharp increase as compared to RM140mil recorded in 2012. The figure showcased the need for businesses to adopt cloud storage and systems as the way forward, which has also been acknowledged by the government through its various initiatives such as MSC Malaysia Cloud Initiative for SMEs.

To address the rise in cloud computing services adoption, Dimension Data, the USD 6 billion global ICT solutions and services provider, announced it is now a SAP-certified global provider of cloud and hosting services for SAP® solutions. Dimension Data also released a set of pre-configured cloud server images that makes it easy, safe and cost-effective for cloud clients to have a new cloud server operational in Dimension Data’s Managed Cloud Platform (MCP) within 30 minutes.

Dimension Data offers integrated, enterprise-class cloud services that enable businesses to leverage the flexibility of the cloud for both temporary and mission-critical data centre workloads.

The shareholders of Neotel and Vodacom SA have announced today that they have favourably concluded an agreement on the commercial structure and terms to proceed for Vodacom to acquire 100 per cent of the shares of Neotel valued at an enterprise value of ZAR 7.0 billion. This follows the announcement late last year that the parties were entering into exclusive talks for a due diligence.

Vinod Kumar, MD and CEO, Tata Communications says, “Tata Communications is pleased with the outcome of this deal. It is in line with our financial objectives while paving the way for Neotel to improve its value proposition in the South African market.”

Brocade today announced the appointment of Benjamin Hickey to the newly created Software Networking Director position for Asia Pacific. In this role, Hickey will be responsible for aligning and executing the Brocade software networking strategy across the region, particularly in the areas of Network Functions Virtualization (NFV) and Software-Defined Networking (SDN).


He will be based in Sydney, Australia, and report directly to Brocade Chief Technology Officer (CTO) for Asia Pacific, Matt Kolon.

On May 14, 2014, Brocade announced the hiring of networking and open-source veteran Colin Dixon to the position of Principal Engineer.

An active contributor to the OpenDaylight Project, Dixon is considered a foremost authority on Software-Defined Networking (SDN), specifically as it applies to scalable and distributed systems.

Mendenhall sits on a number of boards and is widely known for being a prolific speaker. He was named one of BtoB Magazine’s top marketers of the year and was ranked on Advertising Age’s “Power Players” list. His campaigns received the Silver Lion’s Best Corporate Campaign Award at the International Advertising Festival in Cannes, France two years in a row.

The two-day Workshop, which brings together the cream of the cream from the technology community, academia and government agencies nationwide, will share knowledge and discuss ideas on means to best address the importance and impact the IoT will have on the country’s economic and social progress and explore collaboration in IoT research, development and commercialisation.

According to the report, this ruling is going to be a game-changing requirement for all major Internet players who live by the concept of net neutrality.

I totally agree that the net should remain neutral and enforces no censorship or whatsoever.

Nevertheless, looks like this ideal is not going to last. 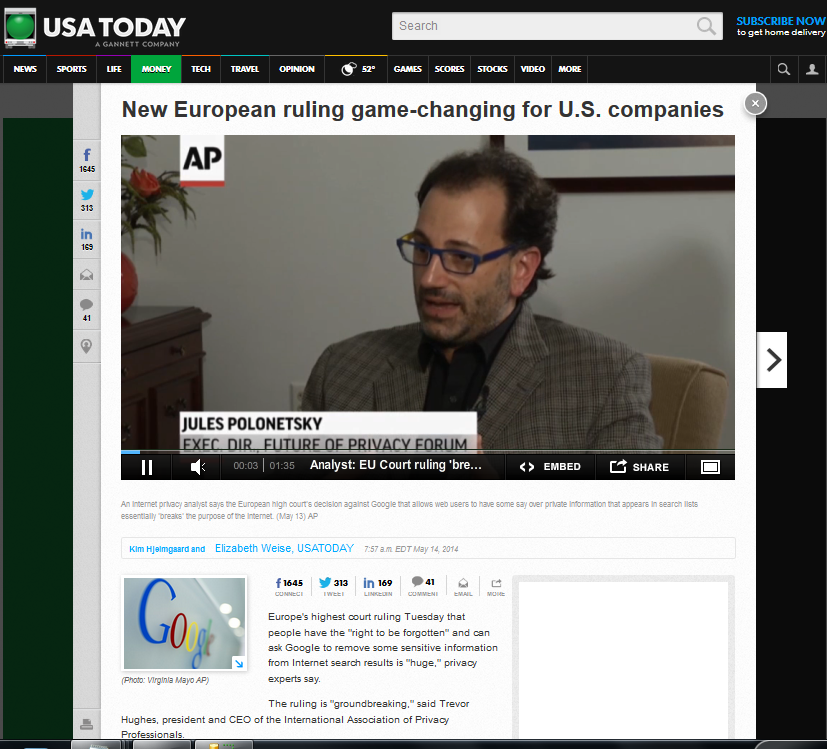 According to Luca Schiovani, analyst at Ovum, “This move may sound reassuring for individuals and their personal freedom; however, it also looks difficult to enforce on a large scale, and may be very disruptive for the functioning of search engines going forward.”

In another similar development, on 15 May 2014, with a vote of 3-2, the FCC adopted proposed rules for the Open Internet. The public now has until 15 July 2014 to give feedback on the rules, (there will be a further 60 days for responses - making 120 days in total), after which it must adopt something permanent.

“Go back a year, and it’s almost inconceivable we would be in a position where effectively both Europe and the US appear to have swapped sides. Before Europe’s Connected Continent package was unveiled last September, most national regulator’s appeared comfortable with allowing carriers to experiment with new business models on the assumption that strong competition at the retail level between ISPs would prevent more serious forms of discrimination and blocking from taking place. Whereas in the US, the FCC has fought hard for over a decade to enshrine the principle of treating all traffic equally, with little room for manoeuvre.

“Following both today’s vote in the US, and a recent vote in Europe, on the face of it, things couldn’t appear more different. The EC’s Open Internet proposals, as they stand, come down heavily on the side of treating everything equally, to the extent that in their current form may actually be unworkable, and in the US the possibility of ‘fast lanes’ remains a distinct possibility, despite the proposals having evolved from a more controversial stance leaked in the days prior. In reality the truth is somewhere in between. Both legislative attempts leave open the possibility of prioritisation, but on the assumption that the ‘basic lane’ remains unaffected in an attempt to avoid a situation of ‘haves’ and 'have-nots’.

USA Today reported that the growing power of big data has got the White House burning midnight oil over its limitless implication.

President Obama advised that new rulings may be required to protect ordinary citizens from abuse of 'powerful data intelligence'.

I totally agree with this. Imagine a time when a common citizen has equal access to all information similar to those empowered to government bodies such as law enforcement agencies ? Things can get messy. 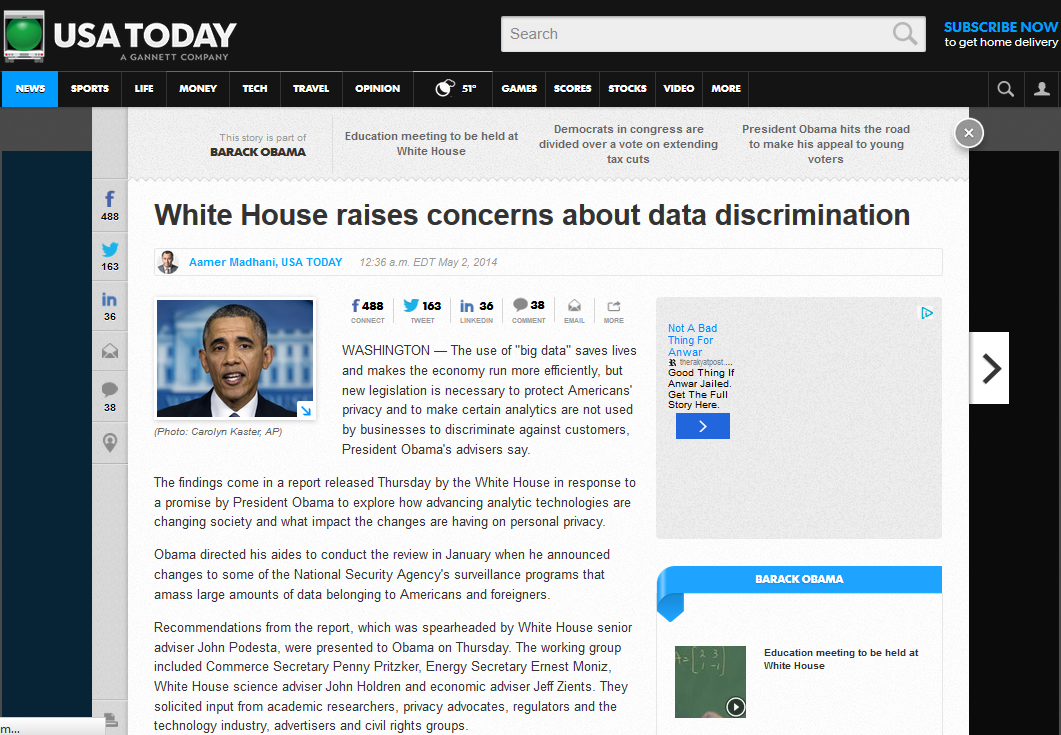 CA arcserve UDP is a transformative enhancement to the CA arcserve data protection software family and a uniquely compelling alternative to the cost and complexity of deploying multiple point solutions.

According to a report by Standard News Service, the microchip is 9,000 times faster and powers less than a typical PC.

The project application of the chip is targeted at robotics.

The innovation is called Neurogrid, a circuit board consisting of 16 custom-designed "Neurocore" chips. Together these 16 chips can simulate 1 million neurons and billions of synaptic connections. 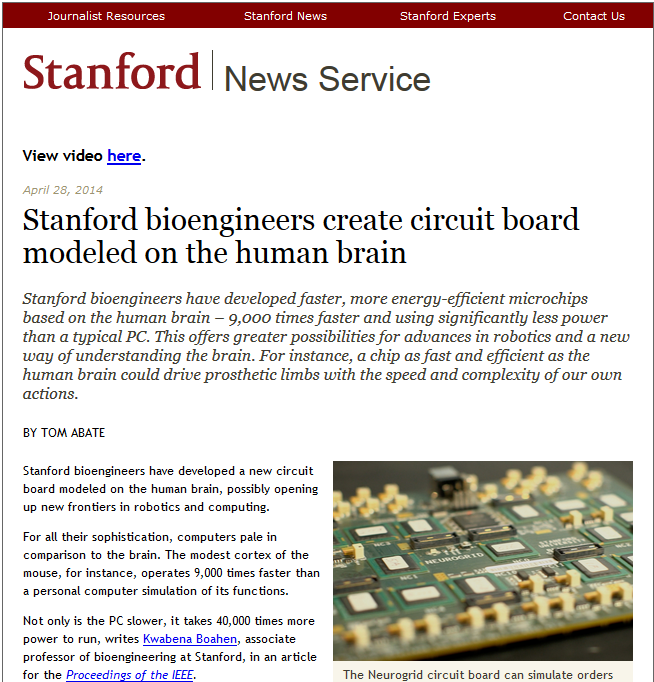