on May 30, 2014
News for Week 4 of May 2014; the biggest news was report by USA Today that the European's court ruled rights to be forgotten by Google.

At the recently concluded EMC World, EMC announced that it is acquiring DSSD Inc to extend its flash storage leadership.

EMC Corporation had announced it has entered into a definitive agreement to acquire privately-held DSSD, Inc. Menlo Park-based DSSD is the developer of an innovative new rack-scale flash storage architecture for I/O-intensive in-memory databases and Big Data workloads like SAP HANA and Hadoop. Products based on the new DSSD rack-scale flash storage architecture are expected to be available in 2015.

The global optical networking (ON) equipment market is off to a slow start in 2014 according to the latest market share alert* from Ovum, the global market analyst firm. Revenues of $3.1bn were down 14% from 4Q13 and 2% from 1Q13. Spending increases in North America were not enough to offset double-digit quarterly declines in every other region. Annualized global ON spending of $14.6bn in 1Q14 is running slightly below Ovum’s most recent forecast, but improved conditions in 2014 should enable 4.6% growth for this year. Market spending continues to fluctuate regionally out of phase by quarter, resulting in sluggish growth on a global level. Vendors with stronger exposure to North America did well in 1Q14.

Ron Kline, Principal Analyst, Intelligent Networks at Ovum, said: “The growth in network bandwidth is astounding and the transport market is evolving to keep pace. The CPO segment is growing nearly as fast, and network bandwidth and 100G is quickly becoming the wavelength of choice. While the overall market remains flat, the trend for CPO is anything but. The data center is the new central office, and interconnecting them is a major driver of ON gear. Backhaul requirements for growing LTE and GPON deployments in the access network are also increasing demand for optical; 2014 is shaping up to be a very exciting year as metro-optimized 100G and adaptable-rate flex-spectrum 200G/400G linecards enter the market.”

PR - SG - May 30, 2014 - Real-Time Social Media Analytics Gets A Boost With Thoughtbuzz-Datasift Integration

Today, ThoughtBuzz, the analytics arm of TO THE NEW, announced integration with DataSift, the leading social data platform that helps to aggregate, process and deliver social data for businesses. This integration will bolster ThoughtBuzz's Omnio G, as users can now expect more advanced and relevant analytical capabilities, particularly for Twitter.

In addition, Omnio G will now be armed with 100% Twitter firehose capability.

As social media has become pervasive in life and business, companies are increasingly looking for ways to connect and engage with consumers through social platforms first. As such, real-time social media analytics has become a powerful resource enabling businesses to access and analyze social data for business intelligence decisions across functions such as customer service, crisis management, online reputation management, and industry-wide research.

Brocade conducted a survey with senior IT decision-makers internationally (North America and UK) which shows that enterprises are being restricted by legacy network resources and feel their infrastructures are not agile enough to deliver robust and scalable services to stakeholders or support next-generation applications. More than half of senior IT decision-makers are either actively evaluating Software-Defined Networking (SDN) technologies or plan to do so in the next 12 months, to deliver improved uptime and availability, better access to real-time information and increased productivity.

49 percent of servers are currently virtualized with this rising to an average of 64 percent in two years, 75 percent of respondents would welcome the use of an “on-demand” data center model for highly virtualized and cloud computing environments. and 65 percent are actively using or evaluating Ethernet fabric architectures to manage their current cost, complexity and reliability challenges while building the robust physical infrastructure needed for SDN.

Microsoft has been transforming education and creating real impact in Malaysia for more than 20 years, and that commitment continues with Microsoft bringing together its vision, innovative solutions, and beneficiaries – students, teachers and education institutions – at the second annual Digital Education Show Asia (DESA) 2014 which was held from 27 to 28 May 2014 at Kuala Lumpur Convention Center.

Through interactive on-floor seminars, workshops and an extensive display of innovative technology in action at its exhibition booth, Microsoft provided an insight into how its technology solutions are advancing the education sector into the 21st century.


A key highlight for Microsoft at the event was a technology demo to the Deputy Minister of Education and Higher Learning II, P. Kamalanathan, by students of Sekolah Kebangsaan Taman Tun Dr. Ismail 1 (SK TTDI 1), on using Microsoft Office 365 on Surface tablets to create, collaborate and communicate in the classroom.

Attendees at DESA 2014 also had the opportunity to sit in a workshop session with Microsoft Global Forum Educator Award winner and Expert Educator Ammani Jeya Pirathaba, a teacher from Kempas, Johor Baharu, to learn about her experiences in being part of the Microsoft Educator Network.

I read a news from my.news.yahoo.com that China will begin a month-long exercise to crackdown WeChat.

Apparently, the heads-up was from China's state media.

According to the report, the crackdown will focus on 'bad' accounts. 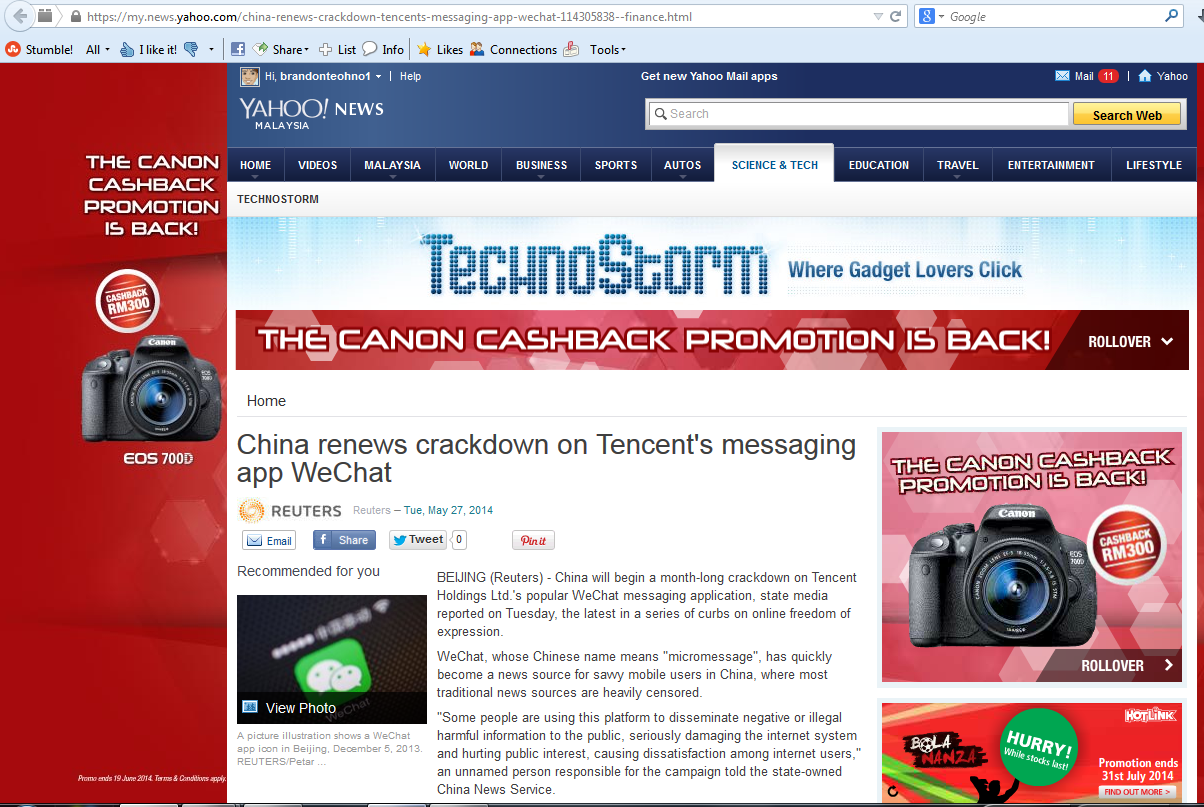 Citrix Synergy,The annual flagship industry conference by Citrix, held from 6 – 8 May at the Anaheim Convention Center, unveiled new mobility technologies and strategies that will provide support for people to work better from anywhere with mobile workspace solutions. The latest solutions also promise IT teams comprehensive control and management capabilities across the entire enterprise’s IT infrastructure.


Citrix Synergy focused on the four key aspects of solutions that businesses need in order to equip their people with mobile workspaces to enhance productivity and achieve strategic differentiation in today’s dynamic and mobile world: Virtualization, Mobility, Networking,Cloud.

PR - May 26, 2014 - Brocade Collaborates with VMware to Provide Intelligent and Powerful SAN Analytics for Cloud Environments

SAS, the leader in business analytics software and services, has announced the partnership with Silverlake Group to introduce a range of SAS advanced analytics solutions to banks in Malaysia. The Memorandum of Understanding (MoU) that was signed will see Silverlake group incorporate SAS’s market-leading Big Data Analytics capabilities into Silverlake Group’s offerings.

Silverlake Group has also adopted SAS® Visual Analytics, a big data visualization tool. “This tool enables banks to have a real-time view of its business on web and mobile devices,” explained Goh. Banks accounted for 17 per cent of more than 1,400 SAS® Visual Analytics licenses sold globally in 2013 – more than any other industry.

Volkswagen Group Malaysia's “Onefootball Brasil” app kick-off in anticipation of the biggest single-event sporting competition in the world – the 2014 FIFA World Cup™. Serving as a one-stop platform that provides immediate updates of your favourite teams and results via a live newsfeed, the app also allows you to get involved in each match by casting predictions on match results and even vote for your preferred ‘Man of the Match’ in each game.

Available for free on the App Store, Google Play and Windows Phone Store, we would like to invite you to get into the mood of the 2014 FIFA™ World Cup today by downloading the app onto your very own smartphone.

In conjunction with Volkswagen’s involvement with the most popular sport in the world, Volkswagen Group Malaysia will also be holding a contest giving away a brand new Polo Sedan as the main prize. Running from 22 May to 13 July, Volkswagen fans and discerning motorists alike only need to head to any Volkswagen dealer showroom nationwide and test-drive any of the vehicles in Volkswagen’s extensive range to stand a chance of getting the Polo Sedan.

PR - May 20, 2014 - Microsoft introduces Surface Pro 3: the tablet that can replace your laptop

Today, at an event in New York City, Microsoft announced the Surface family is growing with a new Surface model, Surface Pro 3, the tablet that can replace your laptop. Surface Pro 3 is powerful, portable and designed to maximize productivity in a sleek, premium tablet package.