I read a news from USA Today that the U.S. Marshals Service is in the process of auctioning bitcoins to potential bidders.

Means, they are selling virtual currencies through auctions.

It is like purchasing stock options, the coins are to be auctioned off in a unit of 3,000 each, the total value for the exercise is said to worth $1.8 million. 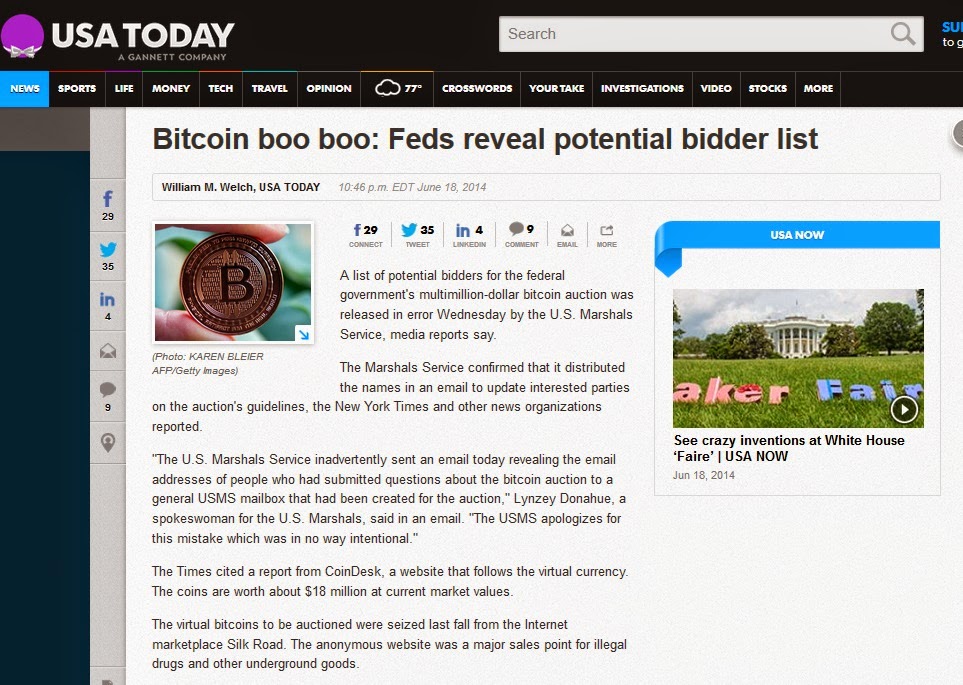 This summer’s football World Cup is proving to be the most accessible in the tournament’s history, with broadcast and streaming services available on up to 5.9 billion screens globally. This is according to Ovum, which reveals that PCs, tablets, and smartphones are providing alternatives to conventional TV viewing, accounting for 57% of all screens.

However, with football fans keen to watch the matches on the biggest screen and in the highest resolution possible, Ovum stresses that the importance of traditional broadcasting – via terrestrial, cable, satellite, or IPTV – for attracting the largest audiences and generating the most value for World Cup rights holders.

Connected devices are playing a crucial role in evolving viewing habits for big-event TV, though. “Devices capable of streaming live and on-demand video – of which there now 4.7 billion – are providing additional viewing opportunities outside the appointment viewing taking place in people’s living rooms,” says Ted Hall, senior analyst at Ovum. “With the likes of tablets providing the convenience and flexibility to consume content whenever and wherever, fans are able to watch more of the tournament than ever before.”

Significant innovation of the viewing experience for this World Cup is somewhat lacking, in Ovum’s view. The tournament will not, for instance, provide the launch pad for the much-vaunted 4K Ultra high-definition format – though FIFA and technology partner Sony are capturing three matches in 4K, very few people see them in this resolution, with screenings limited to public venues in Rio de Janeiro.

Monster today announced the Singaporean launch of the Monster Employment Index; a monthly gauge of online job posting activities based on a real-time review of millions of employer job opportunities culled from a large representative selection of career web sites and online job listings across the country.

The Monster Employment Index Singapore registers a six percent growth in online recruitment activity between May 2013 and 2014. The pace of long term-growth moderates from that in April 2014.

Banking, financial services and insurance (BFSI) charts the steepest year-on-year growth among all sectors, while recruitment activity eases the most in the import/export sector. Among occupation groups, finance and accounting followed by software, hardware, telecom personnel register the most notable growth in demand year-on year.

Themed ‘BYOC LAN Party’ (short term for ‘Bring-Your-Own-Computer’ Local Area Network Party), this was the first ever LAN-based gaming event hosted by ASUS Malaysia. It was done in collaboration with Cyberview and MaGIC to nurture continual interest in custom DIY (‘Do-It-Yourself’) PC building amongst the local PC enthusiasts and the gaming communities.


As its 3rd annual event – ASUS Master DIY Tour, there were over 90 individuals participated in the event which was also recorded as the first and largest gaming get-together in Malaysia took place on the June 13th - 15th, 2014.

Allied Telesis, an industry leader in network service provider opines that the progress for SDN-based solutions in data centres and the adoption of SDN into enterprise networks will only gain momentum once applications are created to deliver true value to business. With this knowledge, Allied Telesis aims to develop initiatives that will further enhance its AMF/OpenFlow offering to support wireless devices, larger networks, and a variety of business models with the creation of value-driven application.

Allied Telesis recognized that previous SDN innovation had primarily focused on the control plane, leaving the management plane underdeveloped. With that in mind, the first step Allied Telesis took was to develop AMF, which delivers an innovative management solution that simplifies network management and drives down operating costs.

In order to help merchants to reach to wider market coverage, MOLPay has been providing more than 100 payment channels across South East Asia, China and Australia. Merchants who subscribe to MOLPay’s service are able to accept payments from channels in different countries and different currencies.

POLi supports 16 banks in Australia, including ANZ, the Commonwealth Bank and Westpac. POLi is an online payment option which facilitates Pay Anyone internet banking payment from buyer’s bank account to a merchant.

Today, Larry Ellison unveils Oracle Database In-Memory to power the enterprises with breakthrough Technology which turns the promise of Real-Time into a reality. Oracle said they are the only vendor in the industry to embrace in-memory computing from applications to middleware to database to systems, enabling businesses to maximize profitability by accelerating operations, quickly discovering new growth opportunities and making smarter decisions. Oracle Database In-Memory demonstrated from 100x to more than 1000x speedup for enterprise application modules in performance tests . The solution is scheduled for general availability in July.

Bosch recently conducted a press conference regarding its Financial Results for Bosch Global, Southeast Asia and Malaysia. It was reported that Malaysia continues to be Bosch’s third-largest revenue contributor within Southeast Asia. Beyond that, Bosch expects a worldwide sales growth of between 3 to 5 percent in 2014.


In 2013, the Thermotechnology division more than doubled its sales in Malaysia due to project developments within the food and beverage, oleochemical, and latex industries. The Power Tools, Automotive Aftermarket, and Drive and Control Technology divisions progressed at a steady pace. The Car Multimedia division saw a year-on-year increase of over 40 percent in sales, largely attributed to increasing global demand for in-car infotainment technologies.

Viber, the leading mobile communications platform offering free messaging and HD-quality phone calls, announced today a key milestone, revealing that it now has more than 100 million concurrent online users. This milestone is a clear sign of the surging popularity of the platform and its active and highly engaged community of users.

Viber announced the milestone alongside the release of a new version of Viber Desktop that features a new look and feel with a special focus on the ever-popular stickers that users love. Viber Desktop has also been upgraded for better video quality and performance.

Brocade today announced the appointment of Chee Keong (CK) Lam to the position of director of Data Center Fabric and Virtualization for Asia Pacific (APAC), and Beni Sia to the role of regional director for South East Asia. Based out of Singapore, both will be responsible for driving the company’s data center and Software-Defined Networking (SDN) strategy and adoption across the regions.