HP’s Graphics Solutions Business today unveiled its latest edition in their line of large format printers -- the HP PageWide XL 8000. The printer is the fastest colour and monochrome production printer in its category and can run 60 per cent faster than the fastest monochrome LED printer in the market.

The XL 8000 is also targeted to deliver to small- to medium-sized reprographic houses and enterprise CRDs robust mid-to high-volume production of technical documents, including translucent prints, black-and-white whiteprints and digital blueprints, at up to 800 and 320 A0 pages per hour respectively.

The production printing market has traditionally been led by monochrome-only LED printers, requiring customers to also operate large-format inkjet colour printers to address colour jobs. The new printer consolidate workflow to deliver mixed black-and-white and colour prints in half the time it would take to manually collate documents produced on multiple printers.

The HP PageWide XL 8000 will be available in September 2015 and sold by two authorised resellers: COMPEDO Media Supplies & Repair Sdn Bhd (central and southern region only) and Koniway Sdn. Bhd (northern region only).

11street, one of the largest online marketplaces in Malaysia today launches its inaugural K-Festival for the very first time with full support from the Korean government.

Based on its recent research, searches for Korean products on the Internet in Malaysia have been increasing steadily over the past two years. During the month long festival, a wide array of products will be offered to Malaysian shoppers with exciting discounts from four categories namely K-Lifestyle, K-Fashion, K-Beauty and K–Food.

The Korean government has also given their full support through the means of offering selected Korean-based SME sellers on 11street with free shipping in a total value of RM500,000 that will be enjoyed by shoppers. 11street currently has over 300,000 Cross Border Trading (CBT) products, ensuring shoppers are purchasing genuine and quality products from Korea.

In addition, shoppers can download 50% discount and free shipping coupons daily from the portal. Kindly refer to the attached full press release and pictures for more information, and let us know if you have any questions or need additional information.

Kaspersky Lab’s security researchers have registered new techniques and activities from Darkhotel, a known advanced persistent threat (APT) actor that has been active for almost eight years. In attacks dated 2014 and earlier, the group misused stolen code-signing certificates and employed unusual methods like compromising hotel Wi-Fi to place spying tools on targets’ systems. In 2015, many of these techniques and activities have been maintained, but Kaspersky Lab has also uncovered new variants of malicious executable files, the ongoing use of stolen certificates, relentless spoofing social-engineering techniques and the deployment of Hacking Team’s zero-day vulnerability

Darkhotel is a tool re-purposed for hacking hotel's wifi, the original tool was from Hacking Team who sold it to some governments and law enforcement agencies.

Hacking Team's tool was leaked to the public.

This creates a virtualized infrastructure with failover and IP replication services to the Brocade Gen 5 Fibre Channel SANs in each location, helping to ensure a highly resilient foundation between servers and a broad array of EMC high-end and midrange storage systems.

ASUS ZenPower is now available for sale in our ASUS Store online @ http://store.asus.com/my

Samsung Malaysia Electronics (SME) today announced the arrival of the Galaxy Tab S2, the latest of its premium tablet series. Herald as the perfect personal companion, the Galaxy Tab S2 is stylishly designed to be the slimmest and lightest tablet with a sleek metal frame finishing and packs a powerful performance to boast. Apart from enhanced usability, this new tab-on-block provides a dual functionality where productivity and entertainment are concerned, on the go, anywhere and anytime.


The Samsung Galaxy Tab S2 will come in a variety of connectivity, storage and size options: 9.7-inch and 8.0-inch LTE version, available in 32GB with MicroSD up to 128GB. It will be available in the Malaysian market, starting from 14th August, 2015 in Gold, White and Black colour.

Governments must effectively harness the power of Big Data Analytics if they are to coordinate programs within and across agencies, share information and use actionable intelligence to influence decisions that can contribute to national development and overall enhancement of citizen quality of life.

At a roundtable discussion today on the topic of ‘Nation Development with Big Data Analytics’, Teradata’s Chief Technology Officer, Stephen Brobst highlighted the importance of having government agencies put in place a big data strategy that has the citizen as its focus as well as one that effectively harnesses the benefits of open data.


“A multi-channel strategy will help government agencies deliver interactions that are connected and accurate to help citizens make better decisions, be it regarding healthcare, banking, insurance or even government services,” said Brobst, who is a former member of the President’s Innovation and Technology Advisory Committee (PITAC) under Barack Obama.

With the income distribution, the Fund has registered a yield of 6.05 per cent, outperforming its current benchmark of 3.12 per cent.

Ms Lim Suet Ling, Chief Executive Officer, UOBAM (Malaysia) said that the Asian bond market faced a challenging first half in 2015, due to an anticipated interest rate hike by the US Federal Reserve later this year. Despite that, the Fund’s income distribution was better than expected.

Utilizing big data analytics to personalize the customer experience will be crucial for telcos to manage customer churn and improve loyalty, says Ovum. It takes on average, at least 3.5 years for telcos to break even on SAC (subscriber acquisition cost), however the average customer lifetime for telcos is currently only 2 years. To offset this, telcos must look to monetize their big data analytics investments and launch initiatives that will deliver value to their customers, reduce churn propensity and reduce the overall telco SAC.

Ovum analyst, Chantel Cary, commented: “Churn rates among telcos have reached staggering heights and are climbing. Across all regions, telcos are seeing customers churn at rates as disparate as 1.5% to nearly 6% per quarter. Telcos recognize the importance of customer retention and understand that big data analytics will help to differentiate the customer experience; many, however, have hesitated to launch big data analytics initiatives that will drive personalized offers and encourage the cross-sell of products that will lead to greater loyalty. This was confirmed further in our survey results which showed that while more than 70% of telcos that have invested in big data have planned to apply big data analytics across the business, less than 20% of these telcos have been able to fully deploy analytics to support customer-focused initiatives.”


For the past seven years, Beaudoin served as executive vice president and CFO for Nuance Communications, a public company and leading provider of voice and language technology solutions. There, he led accounting, financial planning and analysis, tax and treasury, investor relations, information technology and administrative functions. Prior to joining Nuance in 2008, Beaudoin was president, CFO, and chief operating officer of Polaroid Corporation and led the strategic and operational transformation of the company. Previously, he held senior finance positions at Parametric Technology, i2, Compaq, and Digital Equipment Corporation. Beaudoin earned both his Bachelor of Arts and Master of Business Administration degrees from Babson College.

Beaudoin joins a company in hyper-growth, as awareness and demand for SimpliVity’s revolutionary hyperconverged infrastructure solutions continue to surge. The company recently announced impressive mid-year results, posting 250% year-over-year bookings, as well as 35% growth in its employee base since the beginning of the year. Unlike most emerging businesses, SimpliVity has already established a strong global presence, with more than 50% of its sales derived outside of North America. In March, the company secured $175 M in Series D financing. With a valuation of more than $1 billion, SimpliVity became one of the fastest growing IT infrastructure companies.

WhiteSpace Alliance (WSA) is excited to announce deployment of India’s first whitespace pilot. A copy of our announcement is attached. The deployment is being conducted in partnership with the Indian Institute of Technology Bombay at Mumbai, and is the first whitespace implementation to provide broadband Internet access to rural citizens in India. The program is part of WSA’s work with the Government of India supporting its “Digital India” initiative.

The deployment spans seven villages in the Palghar district. In addition to delivering broadband access, kiosks have been set up to test the feasibility of applications such as eGovernment services and ATM teller machine services. Results of these whitespace deployments will be described at the WhiteSpace Alliance Global Summit in New Delhi on 26-27 October, 2015

Autodesk Stingray runs on Windows and will be available via Autodesk Subscription for USD$30 (RM117) per month. Later this summer, Autodesk plans to offer Maya LT Desktop Subscription customers access to the engine as part of Maya LT. For more details about Stingray, visit www.autodesk.com/stingrayengine.

LASER COMPONENTS' fiber-optic production technologies were expanded in close cooperation with in-house development engineers. This is how polarization-maintaining (PM) patch cords are produced: from ordinary telecom wavelengths to smaller wavelengths of approximately 450 nm. Both passive and active fiber alignment is possible for PM fibers.

In addition, 125 μm endcaps can be integrated in FC and FC/APC connectors. The beam-expanding endcaps result in a decrease in power density at the connector end faces.

The length of the endcaps can be determined by the customer. Pure endcaps (i.e., without connectors) are also available. Ideal application possibilities include laser and medical applications. 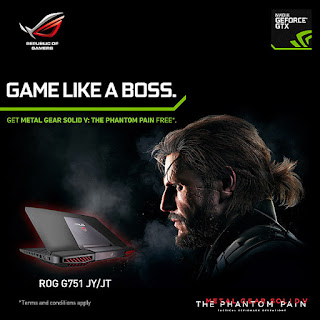 Anyone who purchases a qualifying ROG G751JT or ROG G751JY laptop between 23rd July (0600 PDT) and 1st September, 2015 can receive a game download code1 by registering on the event microsite

(http://www.asus.com/event/2015/nb/metal-gear-solid-v/). The code can be redeemed online at http://redeem.GeForce.com and is valid till 1st October, 2015. This promotion code is only available in