Servion, the only global end-to-end consulting-led specialist in CEM, was acknowledged for its high standards of management, training and commitment to excellence. To meet the changing CEM needs, Servion has continuously invested time and resources in new technologies to step up and capitalise on the latest CX trends such as predictive analytics, cloud-based solutions and personalised interactions.

Abhijit Banerjee, APAC Vice President and Business Head, Servion, said: “Our strength lies in our consulting-led methodology as well as our technological abilities. Our 4DO model - diagnosis followed by design, development, deployment and optimisation - particularly permeates our entire engagement cycle with our customers. This approach has helped us create a variety of Servion’s own innovation-led intellectual property (IP) tools and techniques.”

Tata Communications, today launches its IZO™ Private Cloud service to bring CIOs unprecedented control over their public and private clouds and their entire data centre estate. The new service, unveiled at Cloud Expo Asia here in Singapore, is the latest addition to Tata Communications’ game-changing IZO™ cloud enablement platform, which will empower enterprises to connect to the world’s biggest clouds, and build a truly hybrid, high-performance IT infrastructure, where different cloud, colocation and managed hosting environments work together as one.

IZO™ Private Cloud makes it easy for CIOs to build their cloud, their way by bringing together public clouds, as well as enterprises’ legacy data centre estate, into a single hybrid cloud. Available in 12 locations worldwide, enterprises can now combine the flexibility of public cloud with enterprise-grade security, giving the CIO unparalleled visibility and control through single-pane-of-glass management.

LASER COMPONENTS presents PD-LD‘s inexpensive alternative to HeNe lasers: the SLM-632. These laser modules fulfill the requirements of high-power illumination with a stabilized wavelength. The SLM-632 module offers up to 50 mW at a wavelength of 632.8 nm and is thus a viable alternative to conventional HeNe lasers – and that in a compact design.

Retail sales of recorded music will see little variation in total spending levels in the years to 2020 despite the rising interest in streaming, according to global analyst firm Ovum’s latest forecasts. Spending on digital formats and services will overtake physical formats this year and go on to account for almost three-quarters of all sales in just six years.

Music subscriptions will lead the digital charge and will dominate retail spending for the foreseeable future. Record companies are set to benefit most from the streaming gains given the lower costs involved and are expected to register increased earnings annually.

Music Practice Leader for Ovum, Simon Dyson and author of the report said “2015 is a big year for the music industry with global retail sales of recorded music crossing the digital tipping point.” Dyson added that “For the first time, digital spending will top physical sales, amounting to US$11.7bn this year (compared with US$10.3bn for physical) and reach US$15.7bn in 2020.” 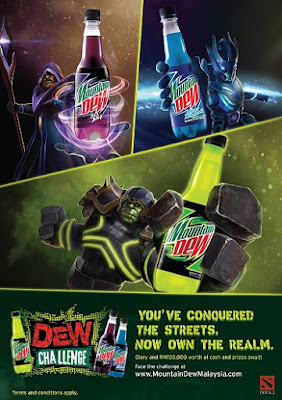 The annual Dew Challenge by Mountain Dew - The most lucrative online electronic sports tournament in Malaysia is back.

This year’s edition of Dew Challenge focuses on amateur teams going up against one another in what is arguably one of the biggest electronic sports challenge –Defense of the Ancients (DoTA) 2, a multiplayer online game.

Based on insights that state the estimated 1.5 million DoTA players in Malaysia rank third in Southeast Asia and the booming local e-gaming scene, this year’s Dew Challenge is set to cater to the largest DoTA 2 amateur tournament in Malaysia.

In line with its tag of being the largest of its kind here, the Dew Challenge DoTA 2 tournament offers a massive RM150,000 prize pool split into two categories: Regional and a two-stage College/University challenge. An estimated 1,120 participants from 224 teams are scheduled to participate in five regional challenges in Johor, Penang, Kuantan, Kuala Lumpur and Selangor, while at least 640 students in 126 teams from 16 colleges and universities nationwide are due to compete in the College category.

Huawei Malaysia and Universiti Putra Malaysia (UPM) have signed a Memorandum of Understanding (MoU) in the appointment of Huawei as UPM’s technology partner in driving the Smart Campus Network Project aimed to improve ICT advancement in Malaysia especially in higher education sector.


As part of the collaboration, Huawei, is providing its 100G Agile Network solutions to UPM for the first time. The 100G Agile network will enable UPM to enjoy higher bandwidth and future-proof investment which is ready for IT expansion in the coming years. The Agile network also serves as a platform for UPM to become one of the pioneers in providing the next generation of teaching mode like virtual training and virtual classroom to students.

Southeast Asia’s leading online shopping and selling destination, Lazada, today announced its plans for the biggest sale of the year. Lazada’s annual Online Revolution will launch in full scale in Indonesia, Malaysia, the Philippines, Singapore, Thailand and Vietnam on 11th November and culminate in a three-day finale ending on 12th December.

Brands and merchants in Southeast Asia and other international markets such as China, Hong Kong, the United States and the United Kingdom will join the sale to bring an assortment of more than 10 million products in over 13 categories. These categories include new additions such as groceries, liquors and automotive in some markets as well as current favorites such as electronics, home & living, health & beauty, fashion, kids & toys, and travel. Brands that have signed up includeCasio, Fossil, Nike, Crocs, Speedo, Puma, Converse, Calvin Klein, SK-ll, Dermalogica, Microsoft, Xiaomi, Samsung, Apple, Philips, Tefal, Canon, Fujifilm, Sony, Sandisk, Huawei Honor, JBL, Asus, Johnson & Johnsons, and Drypers.

During the month-long Online Revolution campaign, Lazada will feature weekly product category highlights, a curated brands’ showcase and exclusive promotions with partner banks, on top of daily deals. Beyond online, it will run a TV advertising campaign that will keep Online Revolution on top of consumers’ minds.

Citrix announced continued growth and commitment in the ASEAN region, with the appointment of Wendy Kho as the country manager for Citrix Malaysia. Citrix has experienced consistent growth across the ASEAN region and this appointment reflects the commitment to invest in Malaysia and the growth opportunity within the market.

Kho joins Citrix after spending eight years as director of Premier Support Services in Microsoft Malaysia, in this leadership role she was responsible for growing the premier practice and developing key talents under her care.


Prior to joining Microsoft, Kho was attached to Indigo Pacific with the responsibility of establishing a new start-up in Malaysia. Prior to that, Kho spent 5.5 years in Singapore with Indigo Pacific Pte Ltd as Regional Technical Consultant, Architect, Project Manager and Technical Manager. Kho brings with her a wealth of experience in building and maintaining high performance teams

Reflecting the importance of the Malaysia market, Area Vice President, Mark Micallef said “The Malaysia market is key to our continued growth and success in the ASEAN region, mobility is fast becoming the norm in Malaysia, with mobile penetration at 140 per cent and an estimated 10 million smartphone users active in the country.”

According to a survey conducted by Kaspersky Lab and B2B International, businesses are losing confidence in third-party suppliers. The main reason is the increasing number of IT security incidents that they caused. The survey found the average cost of such an incident for Enterprise exceeded $3 million.

The recent survey showed that over a third of companies do not trust their suppliers, with the figure for 2015 standing at 37% – up four percentage points on the previous year (33%). This trend is the same for small and medium businesses as well as large corporations. The principal reason for this loss of faith in suppliers is the fact that they were to blame for 18% of cyber incidents in 2015.

According to the report, the top three major consequences of a breach:

Western Digital® Corporation and SanDisk Corporation today announced that they have entered into a definitive agreement under which Western Digital will acquire all of the outstanding shares of SanDisk for a combination of cash and stock.