on November 25, 2015
For IT News Week 3 Nov 2015, the most interesting news was the announcement of Barracuda NextGen Firewall desktop appliances.

Elitecore Technologies, a global provider of WiFi Service Management Platform (SMP) announces that it has successfully enabled du, a leading Tier-1 operator in the Middle East, to deploy a platform with multiple capabilities to monetize. The spread of public Wi-Fi is a key aspect of the Smart City vision, which aims to make the U.A.E one of the world’s most connected and sustainable places.

Acronis®, a global leader in new generation data protection, today announced the availability of Acronis Backup Cloud in Indonesia through a new partnership with Cloudmatika, a Japanese-backed provider of cloud computing services to SMEs, enterprise and government organizations.

The service is provided from two geographically dispersed datacenters in Central Jakarta, ensuring maximum availability and security of all customer data stored within the Cloudmatika network. Acronis Backup Cloud customers establish direct connections with the datacenters and no data leaves the country at any point. The company’s philosophy is to bring together the best cloud computing solution from around the world while fully managing and hosting them in Indonesia, for the Indonesian market.

According to the annual SMB Cloud Insights research released by Odin earlier this year, the small and medium business (SMB) cloud services market in Indonesia is predicted to grow at a compound annual growth rate (CAGR) of 30 percent in the next three years from Rp15T ($1.2B USD) in 2015 to Rp33T ($2.7B USD) by 2018. This growth is primarily driven by SMBs moving business functions into the cloud, encouraged by the availability of tools and solutions provided by companies like Cloudmatika.

BIOSTAR announces its latest graphics card designed to tackle the needs of gamers with competitive performance. BIOSTAR GeForce GTX 950 features 2GB of GDDR5 memory, with 768 CUDA cores, and support for NVIDIA PhysX and DSR Technology. Game in silence with the Low noise output via its heat pipe cooling design, and be prepared for the latest titles with its complete DirectX 12 support. 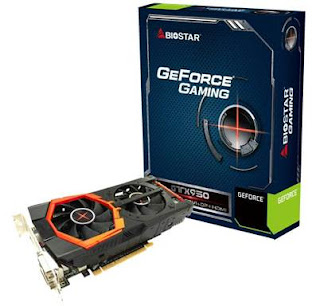 Complimented by the full-array of NVIDIA-exclusive features like GeForce Experience, Dynamic Super Resolution (DSR), Multi-Frame SuperSampling, native PhysX acceleration and other visual improvements is support for DirectX 12; be ready for the next-generation of blockbuster games with the BIOSTAR GeForce GAMING GTX 950.

Norton by Symantec today released findings from the Norton Cyber Security Insights Report which reveals almost twice as many consumers around the world believe it is more likely their credit card information will be stolen online than from their wallets. The report also found other interesting findings includes:

To keep consumers one step ahead of the cybercriminals and keep information safe, Symantec announced the availability of Norton Security in Malaysia. The new service is an advanced, multi-layered protection solution that helps shield consumers from sophisticated and evolving threats across all platforms.

Norton Security is being offered from MYR 99 onwards and available for purchase online at malaysia.norton.com.

iFlix rolled out its latest and most anticipated feature, ‘Download and Watch Offline’. Reaching out to more Malaysians and redefining binge watching, this feature allows iflix subscribers to download their content and watch it offline – without internet connection and incurring prohibitive mobile data costs.

The introduction of Download and Watch Offline, following on the Company’s integration with Google Chromecast, enables iflix to offer consumers a complete entertainment solution whether they are in their living room or on the go, from any mobile, tablet, laptop or television set, with or without an Internet connection.

The VMware Ready program is a co-branding benefit of the VMware Technology Alliance Partner program that makes it easy for customers to identify partner products certified to work with VMware infrastructure. Customers can use these products and solutions to help lower project risks and realize cost savings over custom built solutions.

IBM today launched the IBM Watson Trend App, a new way for shoppers to understand the reasons behind the top trends of the holiday season and also predict the hottest products before they sell out. The app is available via a free download at the Apple App Store.

The IBM Watson Trend app distills the sentiment of tens of millions of online conversations by scouring 10,000 sources across social media sites, blogs, forums, comments, ratings and reviews. Unlike other apps or lists that provide a static ranking of “hot” products, the Watson app reveals how consumers feel about the products they are considering or have purchased.

Using Watson’s understanding of natural language and machine learning technologies, the app uncovers layers of consumer sentiment to pinpoint patterns and trends to reveal why people are choosing certain products or brands. The app also uses predictive analytics to forecast if a particular trend is a fleeting fad or will continue to remain strong.

To uncover insights behind the top holiday trends and products, Watson’s natural language engine aggregates insights into distinct trend groups: content, context and sentiment. Each group is given a relative daily Trend Score, ranging from 0 to 100, based on the impact (size of the conversation) and the momentum (the rate of growth of the conversation).

Cartrack, the leading provider of fleet management solutions, insurance telematics and vehicle tracking and recovery, today announced that it has registered strong performance in the first six months of its financial year. The company also shared its plan to tap on Singapore as its launch pad for global growth.

Globally, Cartrack’s revenue over the six month period from March to August 2015 was SGD47 million, with EBITDA at SGD21 million. With 463,000 paying subcribers worldwide, Cartrack projects this number to grow to 500,000 by the end of this year.

The past six months also saw Cartrack set up a control centre in Johor, Malaysia, a geographically strategic location between the two major cities of Kuala Lumpur and Singapore. The move allows Cartrack to rapidly access and provide support to customers on the road, and deploy a quick response recovery team in the event of a reported vehicle theft.

In conjunction with vForum Malaysia 2015, the Malaysian episode of the VMware’s regional annual tech conference, the company made two significant announcements on business and ICT skill transformation initiatives in the country, in a bid to strengthen their commitment to the Malaysian industry.

The announcements are as below -