For this week / last week, here are / were the biggest news. 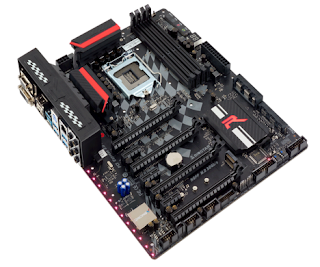 The new BIOSTAR Racing Series features the all-new Racing I/O Armor which protects the I/O panel and components from dust and static.

The Kaspersky Security Bulletin Overall Statistics Report for 2015 highlights a new trend: for the first time ever, mobile financial threats rank among the top ten malicious programs designed to steal money. Two families of mobile banking Trojans – Faketoken and Marcher – were included in 2015’s top 10 banking Trojans. Another remarkable and alarming trend for the year is the rapid spread of ransomware. Kaspersky Lab detected this in 200 countries and territories in 2015. 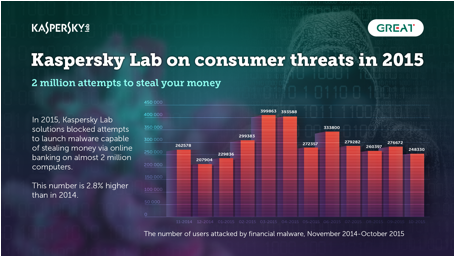 Representatives of the Faketoken family work in partnership with computer Trojans. A user is manipulated to install an application on their smartphone, which is actually a Trojan that intercepts the one-time confirmation code (mTAN). The Marcher family of mobile banking Trojans tracks the launch of just two apps after infecting a device – the mobile banking app of a European bank and Google Play. If the user starts Google Play, Marcher displays a false window requesting credit card details which then go to fraudsters. The same method is used by the Trojan if the user starts the banking application.

The numerous modifications of the most widely-used malware family, ZeuS, were dethroned by Dyre/Dyzap/Dyreza. Over 40% of those attacked by banking Trojans in 2015 were hit by Dyreza using an effective web injection method in order to steal data and access the online banking system.

Gibson Innovations, a Gibson Brands company and a brand licensee of Royal Philips has teamed up with top Malaysians DJs to herald a new world of professional sound by taking the Armin Van Buuren designed Philips A5-Pro to an even wider audience.

Among the top acts collaborating with Gibson Innovations on the Philips A5-Pro are the dynamic DJ-ing duo of Simon Lee & Alvin, who are electronic music producers, DJs, radio mixshow hosts, and record label owners. Simon Lee & Alvin’s mixes have been featured on the award winning Fly FM Five-O since 2008 and continues to garner a huge following among EDM fans across the country and around the world.


Specifically designed by International DJ legend, Armin van Buuren to meet his needs as a globetrotting DJ, the Philips A5-PRO headphone is an essential tool for every DJ professional as well as music aficionados.

Combining a superior robust aluminium close-backed fit with ultimate source accuracy and clarity, the Philips A5-PRO headphones are designed for professional audio monitoring and mixing on the road.

A three-day shopping festival launched by Lazada, the largest e-commerce platform in Southeast Asia, was concurrently being staged in the 5 countries, including the Philippines, Thailand, Malaysia, Indonesia and Vietnam from December 10 to 12. What is worth noting is that the Flash 2, which had been selling well in Southeast Asia, set several new sales records during the December 12 shopping season, winning the top spot of the December 12 sales chart and becoming the most purchased and popular smartphone with local consumers. Lazada data show that the Flash 2 topped the sales charts in all 5 countries and was the undisputed mobile phone sales champion in the 100$-150$ price range. Not only so, the Flash 2 also won the 2nd among all product categories. In addition, single sales of the Flash 2 increased by over 600% in both Malaysia and Vietnam. In the Philippines, Flash 2 sales rose at a startling rate of 1073%.

PropertyGuru’s GuruCares Community Outreach Program, a socially driven initiative for the welfare of the underprivileged held its first ever charity Art Auction which collected some RM44,000 in aid of Agathian Shelter, Petaling Jaya and Rainbow Home, Cheras.

The art auction saw over 20 paintings being auctioned off to PropertyGuru’s corporate partners consisting of property developers, real estate agencies and other business associates.

The auction received a good response from the crowd, as there were attendees who took part in the silent bidding to bid for their favourite paintings.

PropertyGuru had sponsored an ‘all-fun’ Art Jamming session for 43 underprivileged kids on 21st November 2015, to give them an opportunity to draw their dream home. The children aged 3 to 16, showed tremendous interests and talent in sketching and painting their dream home. 20 paintings out of the 43 painted by these children were selected for the exhibition.

“After seeing SimpliVity’s success with Westcon-Comstor’s business in Europe, we were thrilled to extend our partnership with them to the Asia-Pacific region,” said Patrick Aronson, VP, Asia Westcon-Comstor. “Hyperconvergence is one of the fastest-growing segments in IT and more enterprises are seeing SimpliVity’s transformational value. We want to help our partners harness that opportunity so their customers can quickly understand the OmniCube and OmniStack’s economic benefits by simplifying the data centre.”

The KSI(068) and KSQF series of high-quality panel-mount SSRs from Kudom are ideal for use in a range of applications such as resistive heating, catering equipment, temperature control of liquids, motor control, lighting control, electric vehicles, mobility scooters and DC-DC switching.

Driving demand in the relay market is the ability to switch higher loads than electromechanical relays. They also offer the additional benefits of silent and faster switching, as there are no moving parts, and they are able to switch a greater total number of operations.

Nokia today announces that Nicolas Bouverot will become the Head of Asia South as part of the planned combination of Nokia and Alcatel-Lucent, after and subject to the successful closing of the public exchange offer for Alcatel-Lucent securities announced on April 15, 2015.


Nicolas will manage and oversee the combined company’s customer operations across Asia South which includes Bangladesh, Brunei, Malaysia, Maldives, Philippines, Singapore and Sri Lanka, implementing the execution of strategy and enhancing the company’s business relationship with customers, supported by the strategic focus on innovation and quality.

Nicolas is currently the Head of Japan at Alcatel-Lucent.

Nicolas will report to Paul Tyler, Head of Asia Pacific and Japan at Nokia

Sophos, a global leader in network and endpoint security, today announced the acquisition of SurfRight, an innovator in signature-less next-generation endpoint threat detection and response (ETDR) and advanced threat prevention.

Based in the Netherlands, SurfRight has developed a portfolio of technologies that prevent, detect and remediate zero-day and sophisticated attacks by interrupting malware and advanced persistent threat (APT) vectors. SurfRight’s real time anti-exploit technology focuses on detecting and preventing the memory manipulations and abuses that allow malicious code to run in the first place. Generic prevention of exploits at this early stage in the attack chain is a key enhancement to endpoint security mechanisms and can help thwart malicious code in the processor and memory. The portfolio also includes anti-espionage technology and enhanced protection against ransomware attacks such as CryptoLocker.

The acquisition will further strengthen Sophos’ leading endpoint protection technology, by adding complementary new defense tactics, delivered either on premise or in the cloud.

Hitachi Data Systems Corporation (HDS), has been recognized at the Veritas 2015 Asia Pacific and Japan (APJ) Partner Awards as one of its top-performing partners and named the Global Strategic Partner of the Year – Asia Pacific. HDS was selected based on a set of criteria that includes overall performance in revenue growth, program adoption, excellence in technical innovation and the strategic implementation of Veritas’ information management solutions to enable customers to gain control and insight of their valuable information.

HDS is a strong partner of Veritas, both in Asia Pacific and globally. Both companies have established a track record of working together to ensure customers can effectively manage, protect and govern their data across its entire lifecycle. With data doubling in size every two years and expected to reach 44 zettabytes by 2020*, enterprises need to adopt a robust information management strategy to address their data growth challenges. The partnership between HDS and Veritas allows users to gain full insight into their data and store it accordingly based on the industry requirements and regulations, delivering unified data management strategy while reducing data management costs and complexity.
Acquisition Consumer IT e-Commerce Events Gaming Hyperconverged Infrastructure Micro-Electronics Partners People Security Weekly Updates